Nearly 1 million people flooded the National Mall today to watch Barack Obama as he was sworn in as the president of the United States. But you didn’t have to be standing out in the cold to get a glimpse of the action. Twitter and Instagram have been lighting up with photos of the 2013 Inauguration.

President Obama and Joe Biden were both sworn in to office today.

James Taylor takes the stage at #inaug2013 with only an acoustic guitar to sing “America the Beautiful.” #inauguration twitter.com/billboard/stat… — Billboard(@billboard) January 21, 2013

And the first couple, Jay-Z and Beyonce, walked down aisle before the former Destiny’s Child singer took the microphone to sing the National Anthem.

According to @bwilliams, THIS was the arrival of the first couple: twitpic.com/bx50ct #inaug2013 — NowThis News (@nowthisnews) January 21, 2013

Kelly Clarkson also sang during #inaug2013. She was also photobombed by Bill Clinton.

It was near freezing today in D.C. but the crowd smiled through the ceremony.

President Obama’s inauguration speech touched on equality for gay couples, climate change, and how this generation has the chance to make America a better place. After his speech, the White House posted a series of photos with quotes from Obama’s speech.

“Our journey is not complete until our gay brothers and sisters are treated like anyone else under the law” #inaug2013 twitter.com/whitehouse/sta… — The White House (@whitehouse) January 21, 2013

“That all of us are created equal – is still the star that guides us still.” —President Obama #inaug2013 twitter.com/whitehouse/sta…

“Our interests our conscience compel us to act on behalf of those who long for freedom.” —President Obama #InaugQuote twitter.com/whitehouse/sta…

“You and I, as citizens, have the power to set this country’s course.” —President Obama #inaug2013 twitter.com/whitehouse/sta…

Twitter also gave us a behind the scenes look at the ceremonies today. Anderson Cooper sent out a photo of all the CNN reporters cuddling under a blanket during their coverage today. 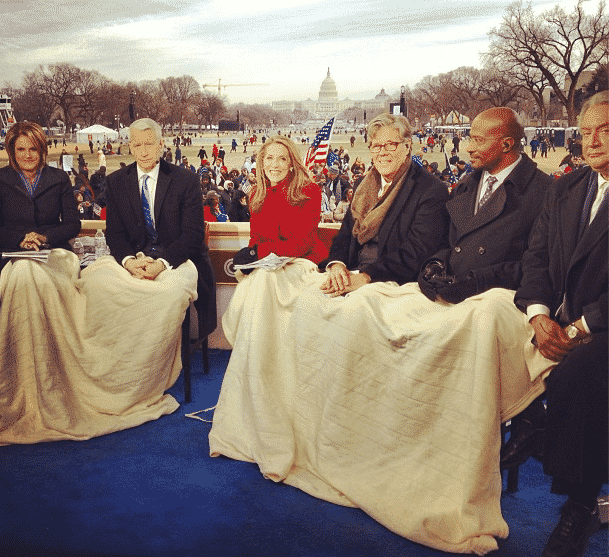