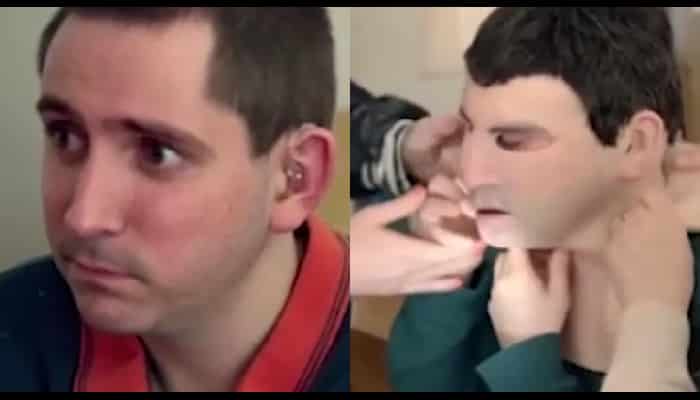 There’s been some amazing developments in prosthetic in recent years, from 3D printed arms to nerve detectors that utilise signals from the spinal cord. Now, a man with a severe sun allergy has been given a realistic “second skin” mask to wear over his face to stop him burning, and the result is truly life-changing.

Alex has a rare skin condition known as xerodema pigmentosum, which is caused by a defect in the DNA repair system. As a result, the 25-year-old is 10,000 times more at risk from sun damage than normal, and his skin blisters when exposed to direct sunlight.

To help her son in his day-to-day life, Alex’s mom Anna made him a make-shift sunvisor to wear outdoors, as even cloudy weather can cause a reaction. But thanks to this new invention, Alex’s circumstances are about to improve.

Invented by Zoe Laughlin, the mask acts as a second skin and is based on Alex’s own features. It was gifted to him by Zoe on BBC show The Big Life Fix, in which inventors create imaginative solutions to everyday issues.

The mask took two months to create, and was formed from a 3D printed model of Alex’s face generated from thousands of photographs. The prosthetic is complete with hair and comes with a pair of sunglasses.

Alex was unsurprisingly thrilled when presented with his mask, saying “I didn’t think it would be possible.”

Anna was also overjoyed: “I’m blown away, I’m glad you tried something that hasn’t been done before. Even in my wildest dreams I wouldn’t have dreamed it up.”

As well as impeding Alex’s ability to repair sun dramage, xerodema pigmentosum has also left him with learning difficulties, partial hearing loss, and he is at a higher risk of developing skin cancer.

Describing the first time her son was exposed to direct sunlight, Anna said: “You can see on the photos his face is fried, totally fried, there was no skin there. His face was burnt, his hands were burnt, his legs were burnt.

“He was then diagnosed with Xeroderma pigmentosum which has kept him indoors during every sunny day growing up.”

Still, Anna refused to lock her son away, which is why she came up for the original ingenious idea of his mask and visor.

Watch the emotional moment Alex gets a new lease of life below!

So Long Facetune, People Are Now Using Prosthetic Makeup to Improve Their Faces

The moment he was inaugurated, immediate changes made by Biden made headlines across the country. These are many of the controversial issues and topics that were shunned and ridiculed by the former administration. Americans can finally breathe a sigh of relief that these concerns have finally reached government policies. It seems clear that Biden has been… END_OF_DOCUMENT_TOKEN_TO_BE_REPLACED

Presidential pardons are one and many in the history of the US. There are many times when US Presidents granted reprieves for their citizen’s misdeeds. The US President may grant a pardon for any individual, including himself, for any crimes done against the country and its citizens. This issue of Presidential pardons has been trending… END_OF_DOCUMENT_TOKEN_TO_BE_REPLACED