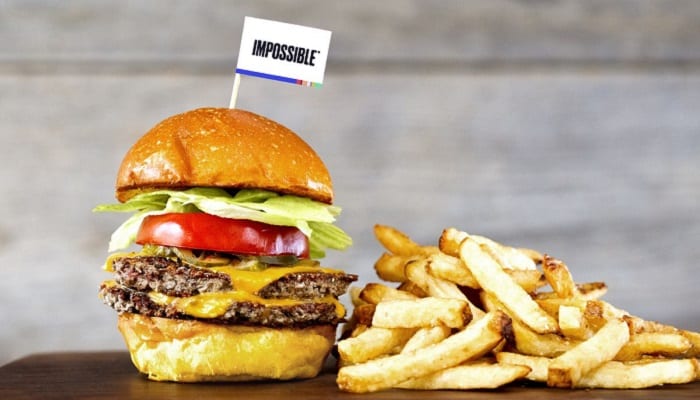 We thought we’d finally solved the problem of the whole “meat eaters VS vegans” debate. After all, the Impossible Burger seems like the perfect solution – a burger that looks, tastes, and even behaves like meat, but is made entirely from plants. A way for meat-lovers to eat their favourite foods without hurting animals or the environment in the process. But according to PETA, the vegan burger “that bleeds” isn’t as animal-friendly as it first appears.

The Impossible Burger’s key ingredient, soy lehemoglobin, which is basically the roots of soy plants, has just been FDA approved. The additive is what gives the burgers their meaty flavour, as they are similar to the proteins found in blood. This news means the burgers will soon be available across the country for vegetarians and vegans to enjoy. Still, they may have second thoughts when they discover why PETA refuses to give the delicacy its backing.

Impossible Foods, the masterminds behind the burger, have admitted to testing soy lehemogolbin on 188 lab rats in three seperate tests. Basically, the Impossible Burger was tested on animals, despite the company not being required by law to do so.

Mimi Bekhechi, PETA’s Director of International Programmes, said: “While we were delighted when the vegan Impossible Burger was introduced, we are deeply disappointed that company executives chose to harm animals, particularly as there was no legal requirement for them to do so.

“Force-feeding tests are pointless, as well as cruel, since the results tell us only how a substance affects rats, not humans.

“Many other wonderful vegan companies and products, such as Beyond Meat, Tofurky and others, have been developed and brought to market without harming animals. Our support of those companies remains unwavering.”

What can we take away from this? That like with beauty products, just because something is plant-based doesn’t mean it’s all-natural or animal-friendly. So do your research! (Especially since your food might also contain some of these gross ingredients).

How did he die? An African American man, George Floyd, 46, was killed by Minneapolis Police officers. Floyd was being investigated for forgery. George Floyd’s death was caused by a police officer holding him down on the ground with a knee on his neck. He was not shot to death but instead strangulated. Now, his family… END_OF_DOCUMENT_TOKEN_TO_BE_REPLACED

The Blood Test, The Swab Test, and The Saliva Test      Essentially, there are three general types of COVID-19 testing produced so far. One is the rapid test, the second is the saliva test and the other is the swab test. The rapid test (also known as the anti-body test) uses blood samples. The swab test… END_OF_DOCUMENT_TOKEN_TO_BE_REPLACED

The COVID-19 pandemic is one of the biggest modern pandemics known in history. Currently, there are more than five million confirmed cases in the world, with a total of 333,000 deaths. A total of 1.6 million of these confirmed cases are in the US alone. The world is currently in a race of finding a… END_OF_DOCUMENT_TOKEN_TO_BE_REPLACED

Despite concrete data and research, people’s opinions will always be diverse when it comes to a variety of topics including religion, politics, gender, and more. Denial is a common reaction to many important discussions and serious world events. The COVID-19 pandemic does not differ from any issues and is subject to opinions from critiques all… END_OF_DOCUMENT_TOKEN_TO_BE_REPLACED

Back in January, when the Wuhan, China coronavirus broke out, it didn’t make it to the front page of newspapers, in print or virtual form. Today, January feels like a lifetime away. Like it or not, people around the world have adapted to the new normal – staying at home, frequent hand washing, and social… END_OF_DOCUMENT_TOKEN_TO_BE_REPLACED

Since the beginning of the year 2020, the whole world has been stupefied by the rapid spread of a deadly coronavirus known as COVID-19. World superpowers in the West were unable to prevent the virus from reaching their borders. Because of this fact, the novel coronavirus COVID-19 became a world-wide pandemic no less than three… END_OF_DOCUMENT_TOKEN_TO_BE_REPLACED