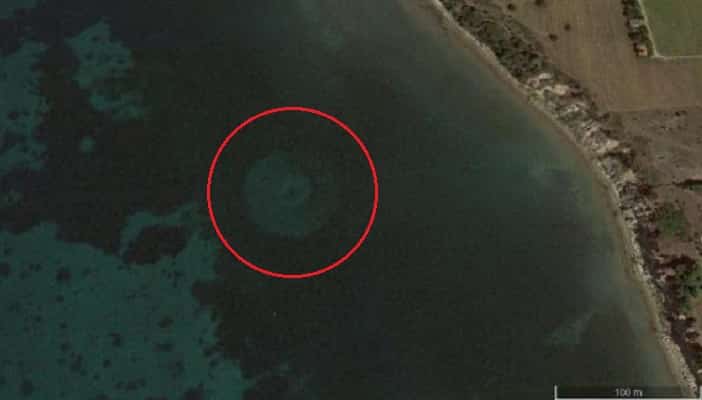 Despite the fact that most people just use it to look at their homes from space (don’t act like you’ve never done it), Google Earth has courted it’s fair share of controversy over the years.

There’s been multiple death hoaxes and endless other creepy finds from around the world since the programme launched in 2001, and now we can add a “USO” to that list.

Found off the coast of Greece, this strange object can be seen hiding beneath the waves only metres from the shore of Michaniona, Thessaloniki.

Circular in nature, the object seems to include smaller circles towards its centre. First shared on Disclose.TV, the finder claims that by his measurements the USO is about 220ft long.

“I did also take some measurements using the ruler on google earth and this object is of 220 feet long.”

Still, what actually is it?

Video commentors have suggested the object could be everything from a former lighthouse, to a volcanic crater, and even just a mound of underwater dirt.

One commentator was more than a bit confused by the USO’s location, writing: “That is weird. All around topography looks rough, deep. Nothing in the area looks remotely like that object.

“Its shape also seems too symmetrical. There is a harbour some distance to the north. Is it possibly connected to that structure?”

While another suggested someone should dive down there and check it out: “It possible to find out if to dive in there. Someone had to make sure already.”

With how close the object is to the shore, it’s surprising no one has come across the USO before. We give it an hour before the conspiracy theories start rolling in.

Together with the fireworks for the Independence Day weekend, the latest explosive Hollywood news involves no one else but the controversial Kanye West. The famous celebrity has revealed his plans for a presidential run. Originally planned for 2024, he has stated that he is actually going to run for the 2020 Presidential elections in November. The… END_OF_DOCUMENT_TOKEN_TO_BE_REPLACED

Recent trends have reported that K-pop fans in the US are getting mixed in with current issues in politics. K-pop fan communities are using online platforms to rally up and protest against racism in the United States. In support of the #BlackLivesMatter movement, the online K-pop community has come together in protest. Never has it… END_OF_DOCUMENT_TOKEN_TO_BE_REPLACED