We’ve said it before and we’ll say it again, The White House needs to hire a proofreader.

We hate to be that guy that calls people out on their spelling mistakes, but when it comes to the Trump administration, we just can’t help it.

We all know that Donald Trump likes to make up new words (“bigly,” “covfefe”), but we at least thought his press team would be there to pick up the slack with his spelling errors. Apparently not.

On Friday, The White House Twitter account shared an excerpt from a speech the president made earlier that day: “If economic growth continues at this pace, THE UNITED SATES ECONOMY WILL DOUBLE IN SIZE more than 10 years faster than it would have under President Bush or President Obama.”

Welcome to The Untited Sates of America.

The White House quickly deleted the tweet, but fortunately, somebody managed to screenshot it first. 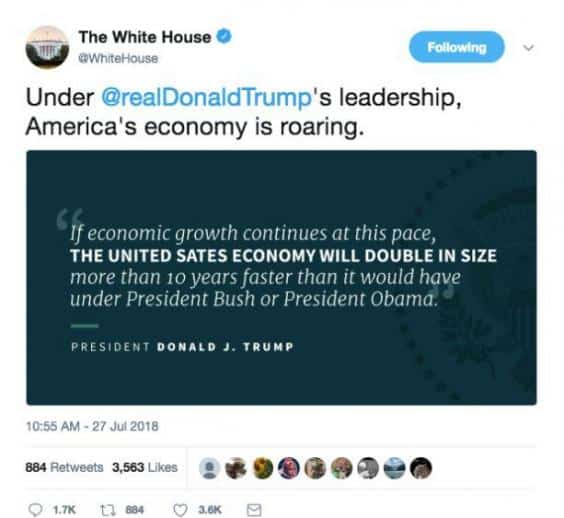 However, this isn’t the first time The White House hasn’t bothered to go over their work, with previous spelling errors including “Make American Great Again,” and “predisent.” Still, our favourite has to be a press release from Trump’s 2017 visit to Israel, which declared that the president wanted to foster “lasting peach” between Israel and Palenstine.

Although, the Trump administration is struggling to hire (and keep a hold of) staff at the moment, so we guess finding a decent proofreader is the last thing on their mind.

P.S. America’s economic upturn actually began during the Obama administration, but ya know, alternative facts and all that.