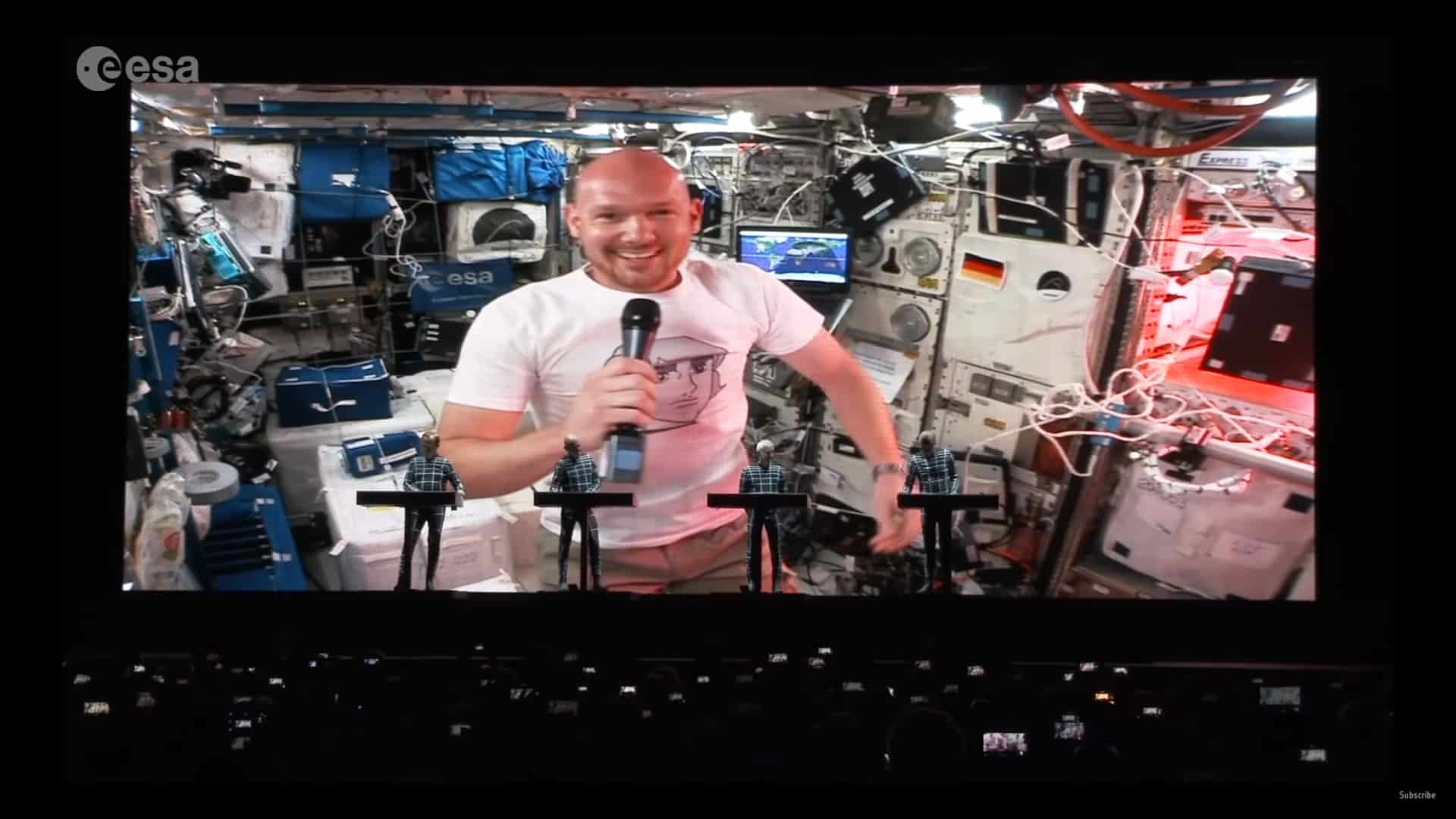 After the first man was sent out to space and after the first footprints on the moon, humanity has been excited about breaking grounds of all sorts. Or in this case, breaking space. Every year, both the National Aeronautics and Space Administration (NASA) from the U.S. and the European Space Agency (ESA) from Europe are subject to big expectations. Among these expectations is what the next achievement would be for mankind, whether it’s a tiptoe or one giant leap, astronauts never disappoint.


Which brings us to one of their new achievements, a concert in space, courtesy of the International Space Station (ISS) and the ESA. We’re guessing it counts as… space opera, right? Anyway, For all you music purists out there, the music was only electronic (aww boo hoo). Nevertheless, they nailed it and with an audience of 7500 in Germany’s Stuttgart’s Schlossplatz. Take a look:

Ladies and gentlemen, Alexander Gerst of the ESA. Currently, stationed in the ISS and currently the first and only performing musician in space, beat that Neil Armstrong. Oh, and a lot of the credit also goes to the legendary electronic band Kraftwerk whose founding member Ralf Hütter, made the electronic music duet possible. For that to happen though, Alexander had to have a tablet configured with virtual synthesizers on board. For those wondering, yes, that was a live performance via a call, meaning performance mistakes could have been made.

I guess that means the birth of a new genre: space music played in space. As for Alexander, his stay at the ISS is due to end in December of this year, if you are interested in more of his space exploits before he comes back down, check out his ESA webpage right here.

Gift-giving isn’t just a seasonal affair between friends, families and acquaintances. The art of gift-giving is also conducted on a national scale with countries often sending each other big, weird and expensive gifts. Experts in all things gifts, Vanilla Reindeer put together some examples of these expensive and odd gifts that have been shared between… END_OF_DOCUMENT_TOKEN_TO_BE_REPLACED

There are lots of ways you can make Pres. Trump feel welcome: you can offer him coffee, or mow a penis into a field for him to view as his plane lands. The willie in question has been chopped by Born Eco ahead of the arrival of President Trump, who visited the UK Monday for… END_OF_DOCUMENT_TOKEN_TO_BE_REPLACED

The year isn’t even halfway over, yet Donald Trump has managed to make a fool of himself and our country countless times. From inviting the national college football champions, the Clemson Tigers, all the way to the White House for some McDonald’s to his to the dreaded results of Mueller’s investigation, it has been one… END_OF_DOCUMENT_TOKEN_TO_BE_REPLACED

Republicans have always said that when they gained control in Congress, they would work to overturn Roe v. Wade and here they are, cashing in on that promise one state at a time. So far, Alabama, Arkansas, Georgia, Kentucky, Missouri, and Ohio have all passed incredibly restrictive laws on abortions, making it illegal for women… END_OF_DOCUMENT_TOKEN_TO_BE_REPLACED

If you’re on Snapchat, then you’ve probably played around with (and were likely horrified by) their filter gender swap filters. While you’re probably using these filters to send hilarious pics to your friends, some guys using them to create Tinder profiles. What likely started out as a joke has quickly evolved, and these guys are… END_OF_DOCUMENT_TOKEN_TO_BE_REPLACED

“Milkshaking” is a hilarious trend in Britain where a milkshake is thrown at and ideally lands on a far-right politician or activist. The point of this nonviolence protest is to humiliate them without causing injury. Physical injury at least. There’s no doubt that milkshaking has led to a few bruised egos. Not only is this… END_OF_DOCUMENT_TOKEN_TO_BE_REPLACED