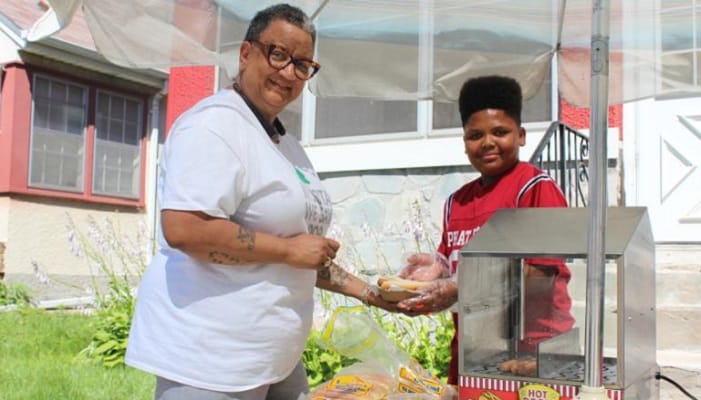 There has been a never-ending stream of racist incidents in the news since Trump was elected two years ago. Racism is suddenly viral, with racists seemingly emboldened by their intolerant commander in chief.

From “Permit Patty” to “BBQ Betty,” many racist incidents to recently take over the web involve white people calling the police on unsuspecting black people (mainly children) going about their daily lives. Well, we’re sorry to announce that it’s happened once again, but at least this story has a happy ending.

Clearly learning nothing from their predecessors, two weeks ago someone reported 13-year-old Jaequan Faulkner to the Minneapolis Environmental Health Department.

Jaequen has been running ‘Mr. Faulkner’s Old-Fashioned Hot Dogs’ since 2016 so he could earn some extra cash. Apparently, the anonymous reporter was concerned that the teen didn’t have a legal licence for his stall.

This could easily have been another tale of a young black person being penalised for hard work, like Reggie Fields, whose neighbors reported him to the police for mowing a lawn. But instead of shutting him down, the Minneapolis Department of Health decided to help Jaequan instead.

Department Director Dan Huff said: “When I realized what it was, I said, ‘No, we’re not going to just go and shut him down’ like we would an unlicensed vendor. We can help him get the permit.

“Let’s make this a positive thing and help him become a business owner.”

After receiving training from local health inspectors and his new permit, Jaequan reopened his stand on Monday.

“The health inspectors all pitched in and helped him get his permit,” Dan continued. “We worked with him to make sure he was following all of the health codes.”

The department also got in touch with the Northside Economic Opportunity Network (NEON), a charity that assists “underserved entrepreneurs” in the community, who helped the teen to set up his business for real.

Ann Fix, a program manager at NEON, said: “We tried to gauge if it was this kid really wanted to have a business or if he was just trying to earn some money.

“Because he was so passionate about having a go at this and owning a business, the city offered to help.”

And Jaequan already has big plans for next summer, which he’ll undoubtably achieve with his new business skills.

“What we’ve been doing with Jaequan behind the scenes is talking to him about getting a cart,” Ann added. “The thought is to get a permanent location with primo traffic so he could sell hot dogs.”
“This young man is so full of gratitude. He is absolutely terrific to work with.”

Racist Man Who is Holocaust Denier Running for Illinois Congress

The world is devastated by the news that Britain’s Prince Philip, the Duke of Edinburgh, has died at the age of 99. Palace media confirms that the Duke has expired mid-day today, April 9th. The announcement did not contain any specifics on the cause of death. The United Kingdom will enter a state of national… END_OF_DOCUMENT_TOKEN_TO_BE_REPLACED

Who would have known that religious prophets would be among the most loyal supporters of former President Trump? In fact, it has been observed that the most conservative Christians may have been the right amount of push for Trump’s presidential win back in 2016. Since Trump’s election back in 2016, numerous self-proclaimed “prophets” have been… END_OF_DOCUMENT_TOKEN_TO_BE_REPLACED

President Biden falls and slips multiple times on the Airforce One Steps and PEOPLE ARE GOING CRAZY! What’s the big deal? Some people are hating, while others are making memes just for the fun of it. We are all human, aren’t we? Everyone’s expected to stumble some time in their lives. However, with the internet… END_OF_DOCUMENT_TOKEN_TO_BE_REPLACED