Friends of a Trans Man Are Crowdfunding to Pay For...

Friends of a recently deceased trans man have raised enough cash to pay for his funeral, after his parents refused to claim the body.

Daine Gray was only 22-years-old when he passed away by suicide on 2nd July. His parent’s had supposedly disowned him prior to his death, and refused to arrange or pay for a memorial.

Fortunately, proving that blood really isn’t thicker than water, Daine’s pals set up a GoFundMe page and have now raised over $20,000.

Daine’s LGBT activist friends say the campaign was a way to give him back his dignity:

“As of of July 16th his parents, who have disowned him, have been notified have yet to claim the body.

“Tomorrow is day 10 of parents not responding to SF Coroner and as a community we can claim the body.

“We need help in providing Final Dignity Rites for Daine. As you know funeral expenses are expensive especially when someone had nothing. Please help share the love and give Daine his Dignity.”

After British TV chef and “gay icon” Nigella Lawson heard about the campaign she shared it on Twitter, helping to bring even more money to the cause.

This is heartbreaking. Please help https://t.co/idjxuP48aO

“Hello guys, guess this is my big ‘public’ Coming Out moment: if we talk in person at all you probably already know, tbh. So… I’m transgender (hence the name/gender change- which is already legal btw).

“This means I identify as a gender different from the sex I was assigned at birth, for those who don’t know. I’m also gay so, that’s a thing.

“I’ve been taking hormones for around eight months now, so I’ve already changed a lot, for those I haven’t seen in a long time.

“Hope this doesn’t lose me too many friends and family.” 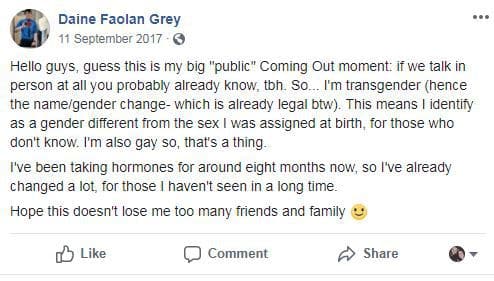 Daine’s father cut ties shortly after his revelation. His friends said that Daine was a “bright star,” but had been feeling down in the run up to his death.

When NBC asked Daine’s parents for their side of the story, his father, Peter Haught declined to comment. While his mother Stephanie Haught, who has long split with Peter, said she had not spoken to her son since he was 16 and was unaware he was trans until a few days before his death. She also claims she didn’t know his body had not been collected, and is now planning to help his friends with the funeral arrangements.