In Helsinki, Trump proudly stood next to Putin, his very best friend among dictators, and acted like a treasonous puppet. And the media has just been bowled over. They’re calling it “a betrayal the likes of which we’ve never seen” and John King has nicknamed the Helsinki meeting “the surrender summit.” Jake Tapper said that “the United States was attacked, and today, President Trump sided with the enemy.” How shocking! How unexpected! 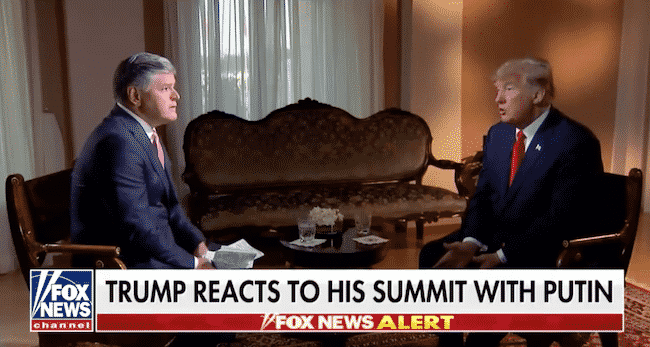 Sean Hannity ever the defender of the presidency, called those criticizing the presidents performance “weak, pathetic, visionless, feckless, spineless.” You know, just like a state-run news outlet would do if their president was criticized. You know, just like Russia or China would do. You know. And I’m sure Hannity would have sprung to the defense of a Democratic president in exactly the same fashion.

It’s dumb to jokingly imply that Donald Trump treats Vladimir Putin as though the two have a romantic relationship. Donald Trump respects Putin way more than he’s ever respected a wife

Tucker Carlson claimed, strangely, that Mexico has done a better job of messing with U.S. elections that Russia ever has, mostly by sending over “those people” to vote in our elections. There appears to be no reason for him to think that. And did we all forge that Mexico doesn’t send people to the United States on personal errands? Do people not know how citizenship works? 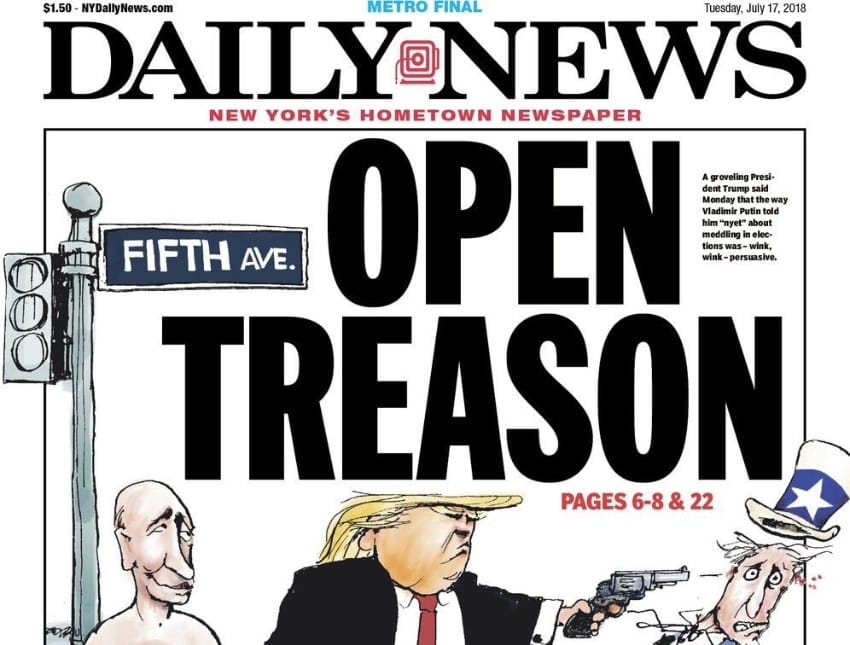 It’s unclear why Trump’s behavior is surprising. Trump has given every indication that he is a useful idiot, happily benefiting from Russia’s election machinations to rise to his undeserved position of power. Throughout his term, he’s done everything he can to reinforce this notion, practically beating people over the head with how gullible and narcissistic he is.

Trump stood next to Putin and incompetently refused to distance himself, just like a treasonous plant of the Russia government would do. Simultaneously, newspaper editors and television anchors clutched their pearls in shock. How could he!

Our relationship with Russia has NEVER been worse thanks to many years of U.S. foolishness and stupidity and now, the Rigged Witch Hunt!

But Trump’s Just a Big Dummy!

Apparently, at this point we’re beyond chalking this up to Trump being stupid. At this point, Trump is acting so much like a traitor that it doesn’t matter if he is or he isn’t. The media no longer appears to care if he was or was not conscious of how much Russia fiddled with the U.S. voter base, or how compromised the election of 2016 really was. The distinction is no longer relevant.

Honestly, what has Trump done to make it seem like this isn’t the case? He has done everything he can to obstruct an investigation that, according to him, would vindicate him. It’s hard to imagine why an innocent person would stand in the way of an investigation that would prove his innocence. Trump has tried to send us this message about his absolutely incompetency since before he got in to office. Apparently only just now has the media realized he was serious.

Even Dictionary.com got in on the act, sharing the definition of the word “treason.” It’s a word a lot of media outlets have suddenly started bandying about, like they only just remembered what it means.

So What’s the Big Deal Again?

Why is this performance the inflection point? Simply witness his incredible performance.

Deferential and obsequious. Nearly mocking the intelligence agencies that Trump himself employs. As Putin screws the world, Trump bends over and cries, “Harder, Daddy!” How do we know there’s no Russian collusion? Well, Putin said so! There’s no way he would lie. 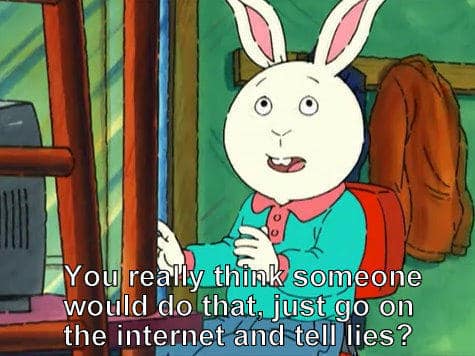 Intelligence agencies say it’s certain that Russia will interfere in the midterm elections. Unsurprisingly, Trump has done nothing to stop it. Every reasonable person realized long ago that Trump was a threat to democracy. It appears CNN is only just now catching up.

It looks like it will only get worse from here on out.