12 Photos Of Adorable Old Ladies Holding The Most Vulgar...

Little old ladies are just adorable. And when they’re brutally honest or vulgar even, they’re just hysterical. With these anti-Trump protests occurring all over the world, we’ve all been given the opportunity to express our feelings via posterboard. As it turns out, people are far funnier than you would think! Even these awesome old ladies know how to work that Sharpie marker. These are some of the most vulgar protest signs in the hands of some of the most adorable activists. 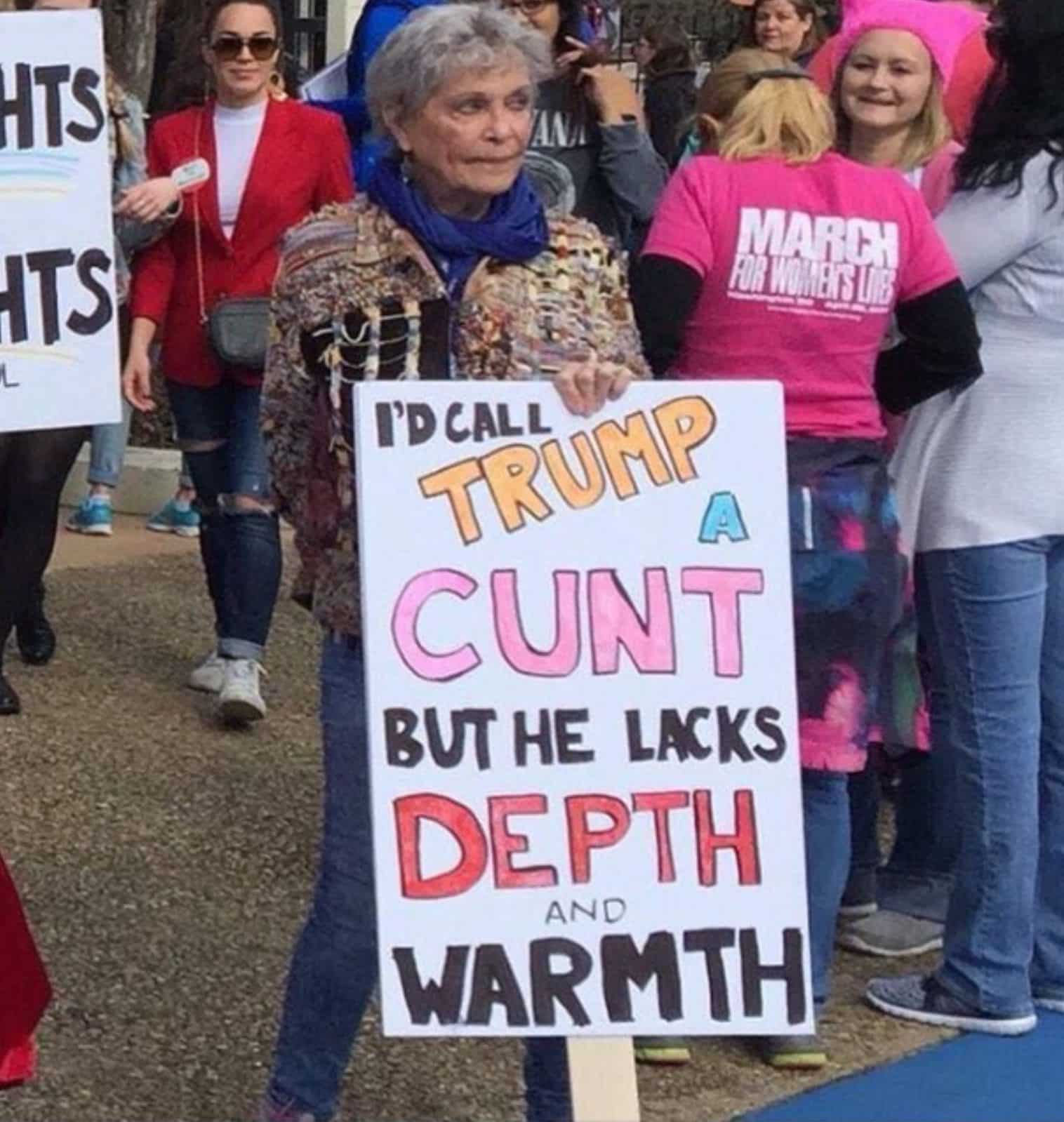 A popular slogan amongst the anti-Trump crowd, it’s infinitely funnier in the hands of this woman. While she’s certainly adorable, there’s no doubt that she’s also a badass. Likely this isn’t her first time on the picket lines.

2. Trump Likes That Sort Of Thing 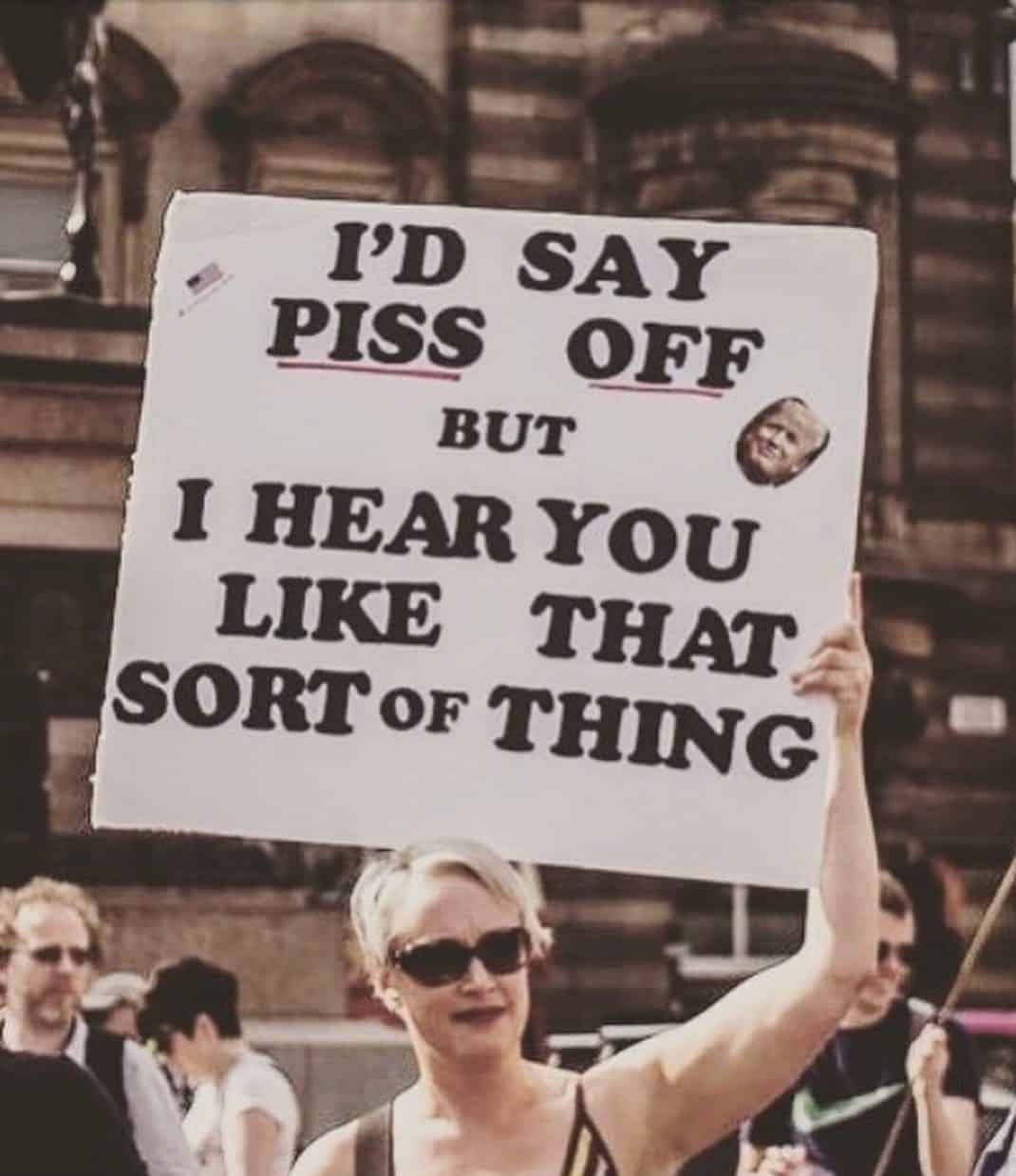 We’ve all heard rumors about the things Trump likes in the bedroom, including an explicit urination fetish. Hardly surprising, as powerful men all seem to enjoy being disgraced and humiliated in the privacy of their own bedrooms. You’d think the president has been humiliated enough for one lifetime but to each their own. The British woman behind this sign is just one of the many reasons I now believe that UK activists do it better.

3. The Government’s Try To Get In Our Wombs 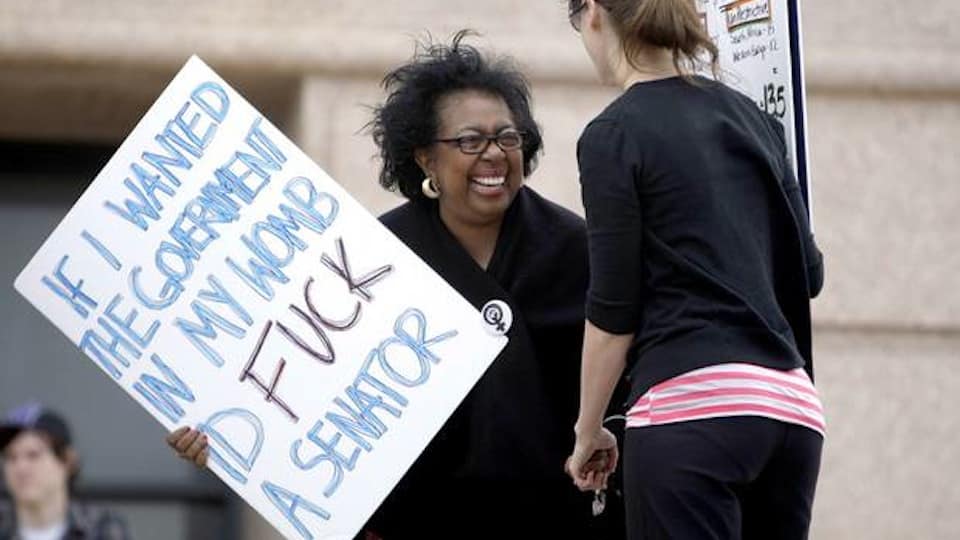 As one of my favorite expressions of all time, the fact that the woman holding this sign is likely someone’s super awesome grandma makes it that much better. It’s great seeing that it’s not just young women who are determined to keep Roe v. Wade from being overturned. Women like this show the rest of the world that it’s not just about abortions. 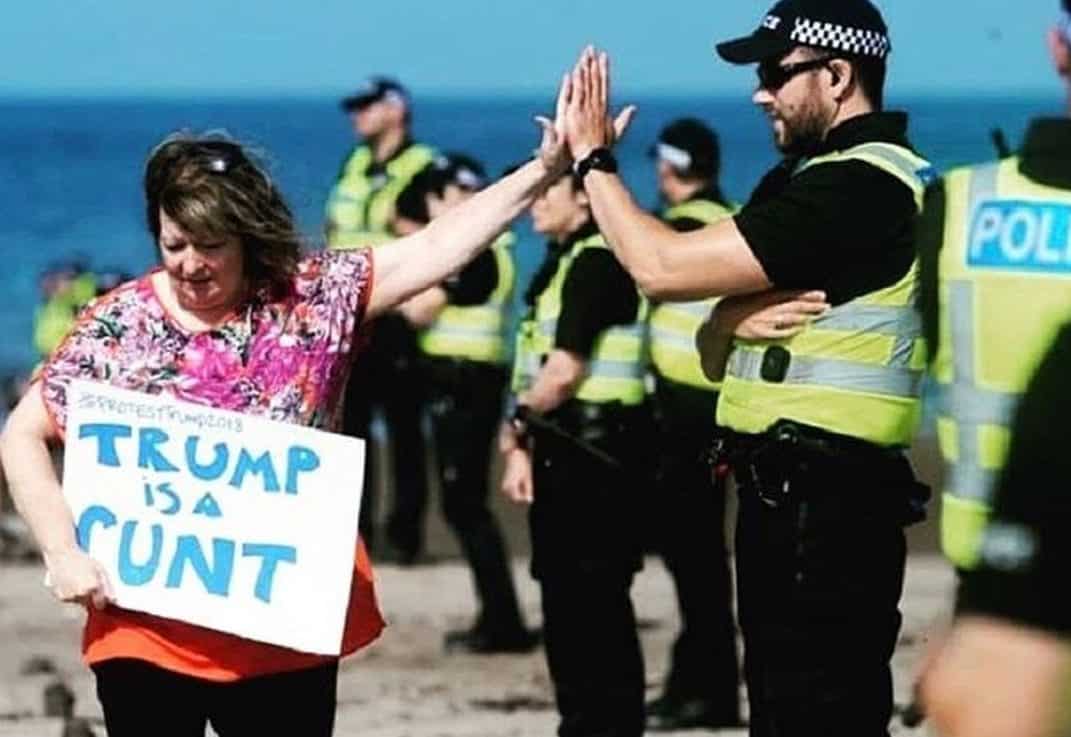 Trump is a cunt

This photo is epic. Not only is this woman holding up a hilariously vulgar sign calling Trump a cunt, but this police officer is giving her a high-five. He must have liked the sign. 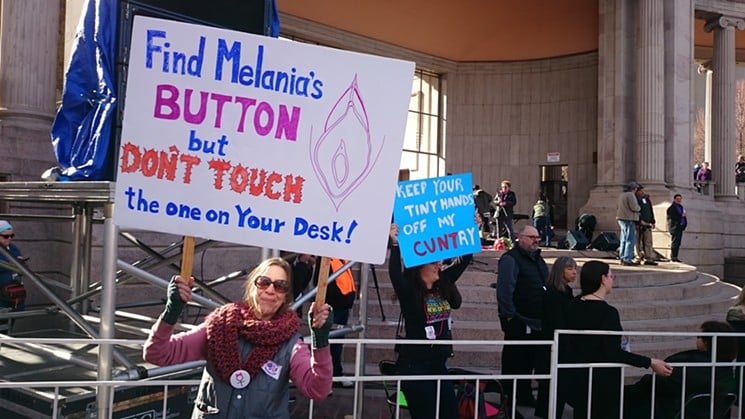 Find Melania’s button but don’t touch the one on your desk!

We all know that Trump could never find anyone’s button, let alone his wife Melania’s. If he could, then she might actually smile once in a while. This woman not only calls him out but draws him a rather accurate diagram. All she needs to add is an arrow pointing to the clitoris, but perhaps she didn’t want to give the president of the United States a helping hand. Likely it wouldn’t do Melania much good anyway, as there’s no way she’s giving her husband the time of day in the bedroom after the world find out that he’s been cheating on her pretty much since they got married.

6. Dr. Seuss Would Be Proud 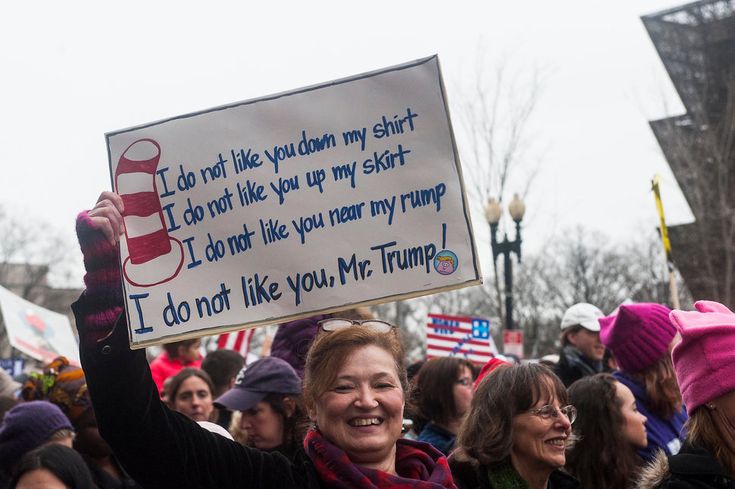 The fact that anyone would want Trump anywhere near their rump is laughable, and this woman made a little Dr. Seuss inspired rhyme to back that up. The fact that women even feel the need to protest against sexual harassment from the president should come as shocking, but somehow it has become the norm. Even the UK felt the need to get in on the action with their own anti-Trump protests. You must be a really shitty president if other countries are protesting your decisions though.

7. The Statue Of Liberty Looks Pissed 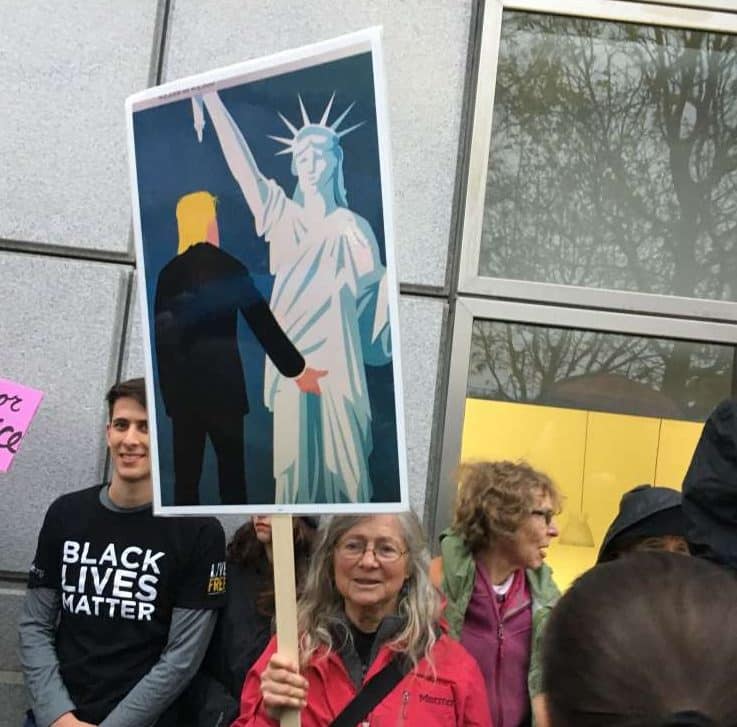 Trump will forever be known as the president who got caught on tape telling another man that he gets women’s attention by grabbing them by the pussy, among other moronic things he’s said. The statue of liberty, a symbol of freedom especially among immigrants coming to America from overseas, is often depicted in images with Trump. Often he’s trying to grab her by the pussy, and she’s either looking mortified or fighting back. Our president is not only taking away the freedoms of immigrants in the United States, but he’s also normalizing sexual assault. There’s no doubt that he’ll go down as one of the worst presidents in American history.

8. Orange No Longer The New Black 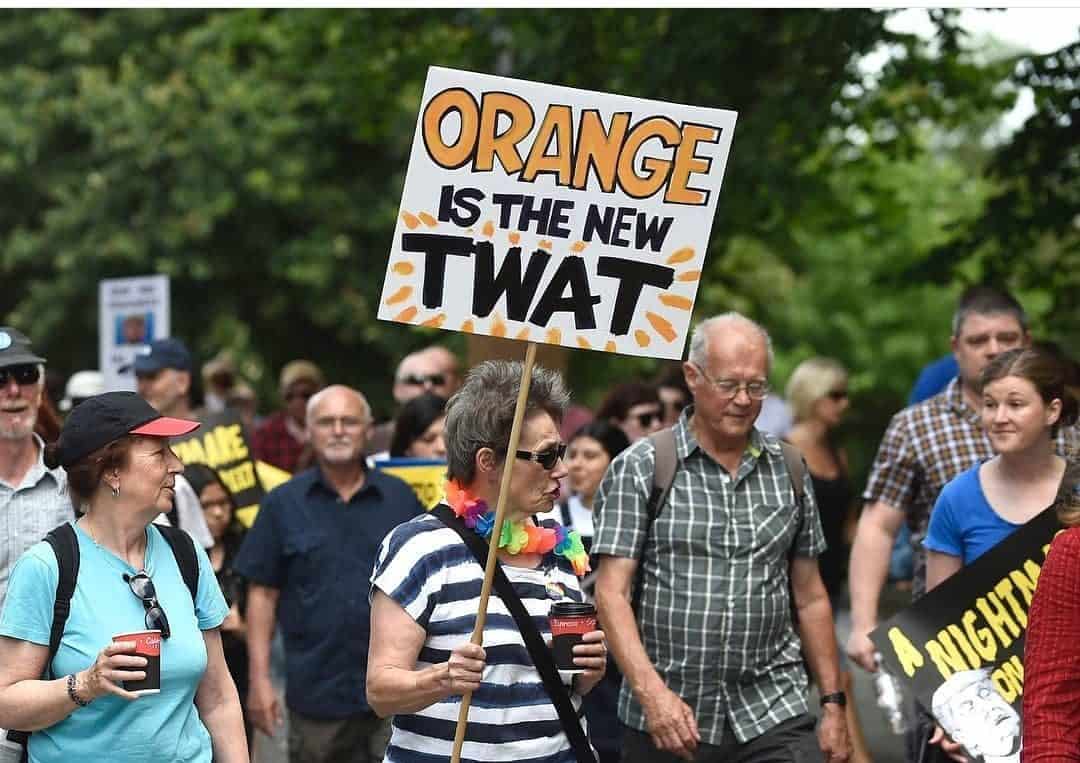 Orange is the new twat

Netflix might claim that orange is the new black, but over in the UK, they might beg to differ. We all know just how much the British love to use the word “twat” and watching this woman march around with her sign in one hand, and coffee in the other is just priceless. Perhaps Netflix will pick up the phrase for one of their future projects. 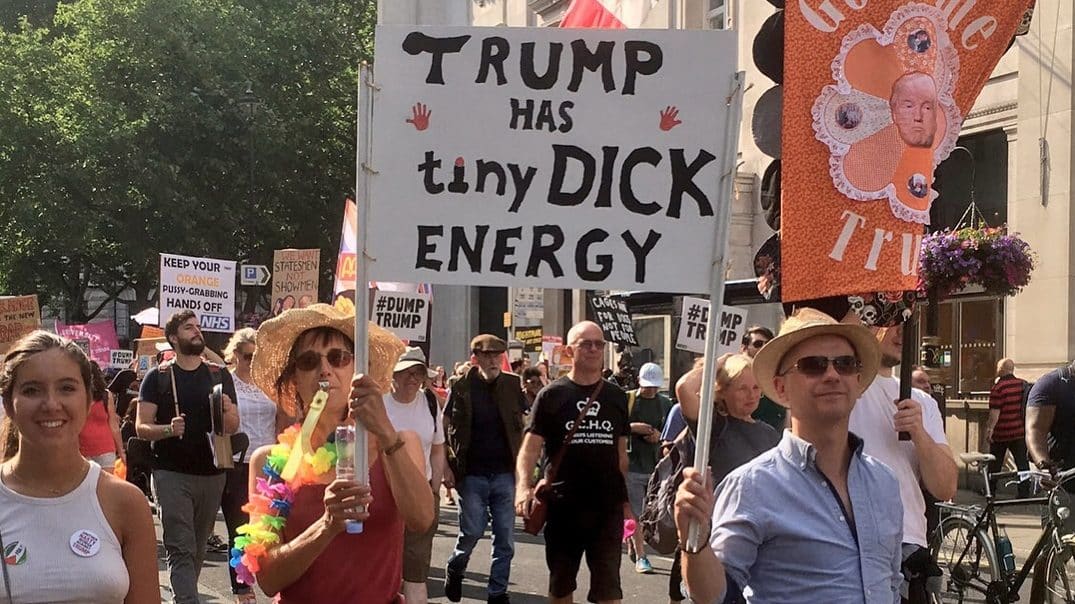 If you’ve ever wondered where Trump gets his energy from, well, this woman revealed the answer during one of the UK’s anti-Trump marches. Apparently, Trump’s tiny dick gives him all the energy he needs to get through each day as president. Because, you know, he needs his strength to sign all those bills with his over-sized signature. 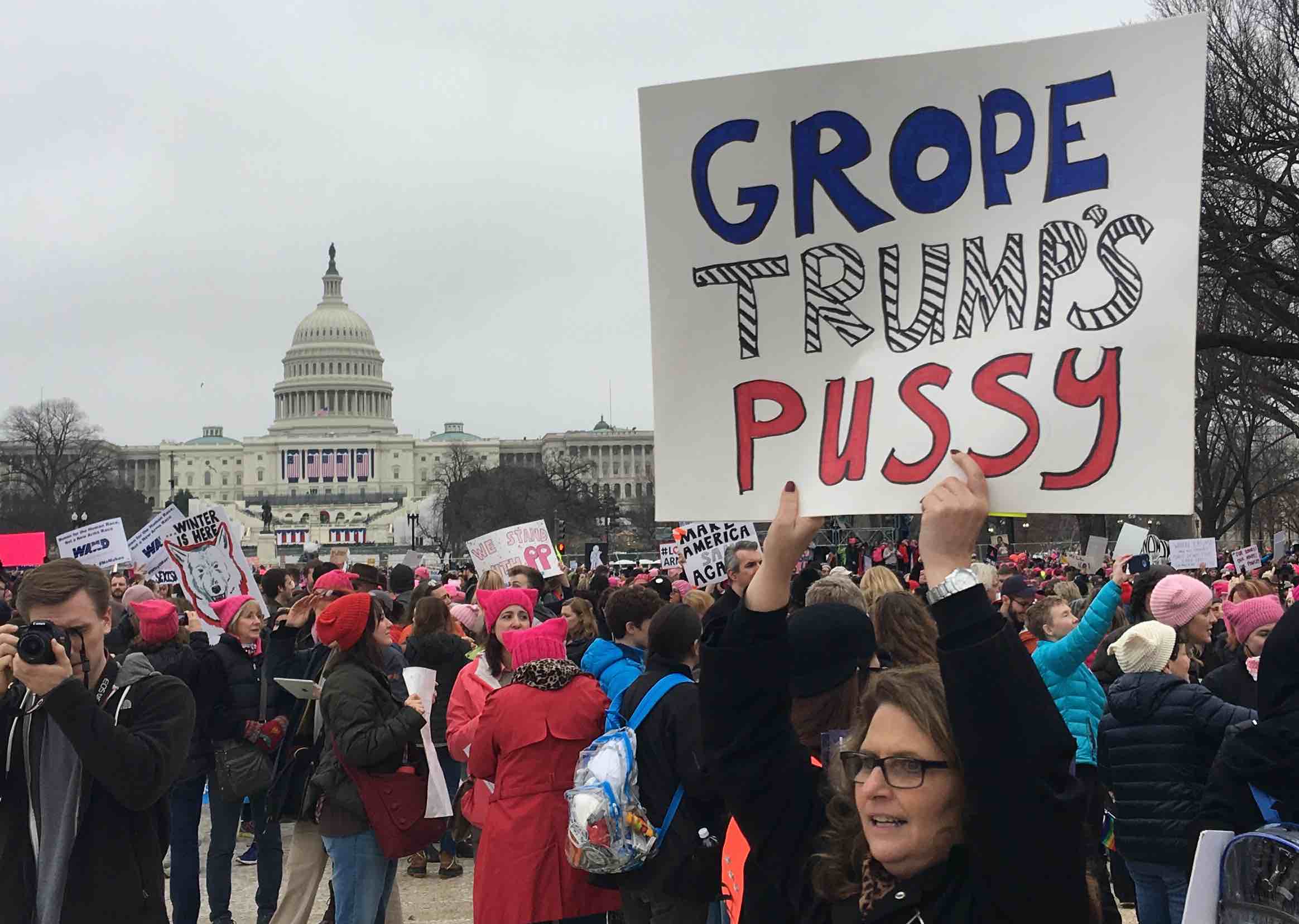 This is what happens when you try to normalize sexual assault, Mr. President. People rebel and start using your repulsive catchphrases against you. I have to say that while this sign is amazing, Trump would probably like this too much. Unless, of course, he was being groped by women his own age. Then he might understand just how grotesque he has been all these years. 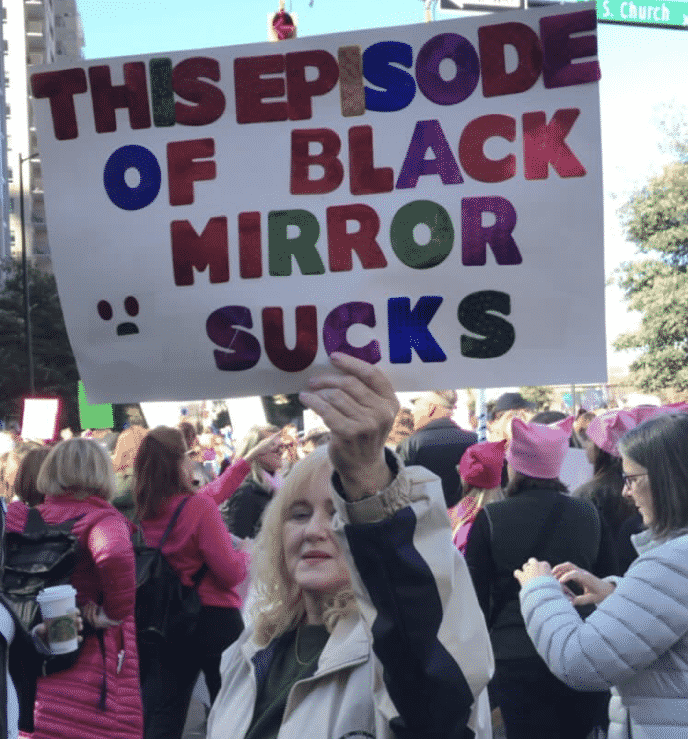 This episode of Black Mirror sucks

Ever wonder if these past two years have been one giant prank by the writers of Black Mirror? Perhaps it’s their way of promoting the next season of the show. We can only wish! This isn’t a dream; this is real life. 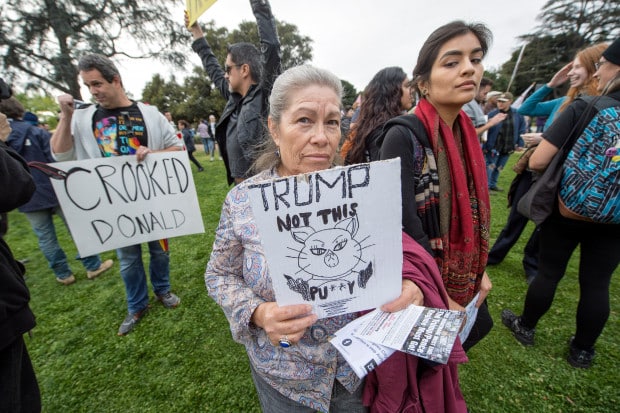 Trump, not this pussy

This woman is deadly serious. Her eyes are daring Trump to try something, and if I were him, I’d be terrified, to ever bump into her. The cat on her sign is also equally as scary.

Signs The White House Clearly Needs To Hire A Proofreader