Donald Trump may think he’s “like, really smart,” but it turns out the internet doesn’t agree. Rumour has it if you Google image search the word “idiot,” then the first thing you should is see several pictures of the US president pulling a range of ridiculous facial expressions, from bored to bemused (although who knows what’s confused him this time).

Google-rankings maybe not be the most reliable source, but it’s still pretty funny. In fact, we tried it ourselves and we can confirm it’s 100% true and oh-so glorious.

Other current top search results for “idiot” include Einstein, who despite being the definition of a genius is misattributed as saying: “I fear the day that technology will surpass our human interaction. The world will have a generation of idiots.”

There’s also Ash Sarkar, who yet again, is not an idiot, but made right-wing journalist Piers Morgan feel like one when she appeared on Good Morning Britain last Thursday.

There was a heated clash between Piers and Trump protester Ash Sarkar on today’s @GMB. Watch the full debate https://t.co/hrCxCkoAeu

Trump also managed to embarass himself this week, after it was discovered that the 72-year-old doesn’t know what the UK is – despite visiting the country and meeting the Queen.

Supposedly, the president failed to understand that the United Kingdom is made up of four seperate countries – England, Wales, Scotland and Northern Ireland, believing that the names “England,” “Great Britain,” and the “UK” were interchangeable and not seperate entities. 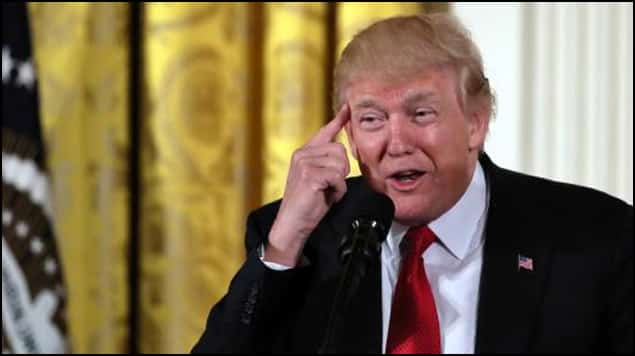 In an interview with The Daily Mail abroad Air Force One, Trump said: “You know you have, you have so many different names – Great Britain. I always say: ‘Which one do you prefer? Great Britain?’ You understand what I’m saying?

When the reporter pointed out that they weren’t the same thing, Trump responded with: “Right, yeah. You know I know, but a lot of people don’t know that. But you have lots of different names.”

He made a similar statement to The Sun during his visit, saying: “You don’t hear the word ‘England’ as much as you should. I think England is a beautiful name.”