Gettin’ Shiggy Wit It: Will Smith Wins The ‘Shiggy Challenge’

A new dance challenge took the internet by storm last week. Now, celebrities across the globe are posting their own variants of “The Shiggy“.

An Instagram star by the name of @TheShiggyShow spawned a dance to Drake‘s “In My Feelings” and challenged millions of Instagrammers to post their own videos of them performing the now-viral dance.

Celebrities like Ciara and Russell Wilson (seen in above video), Odell Beckham Jr., and more posted their own variations on IG and it was an immense hit.

Will Smith, however, recently posted an unprecedented “Shiggy Dance” video (seen above) and everybody is going absolutely mad for it! 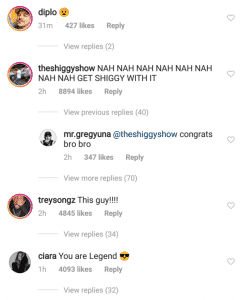 After just 2 hours of Smith posting it on his Instagram, Drake himself commented on the impressive video.

In the video, Smith’s performing the ‘Shiggy’ on top of a famed bridge in Budapest. The caption reads, “Last day in Budapest. I woke up #InMyFeelings I’ma Keep It ?… I was TERRIFIED up there. That’s why my dance moves is all STIFF! Haha #InMyFeelingsChallenge #DoTheShiggy”

Mr. Jiggy Wit It is not only getting props from celebs, but fans around the world are going ham over his adaptation of the zany dance challenge.

As Drake proclaimed — “The Shiggy” dance challenge is “done” and Will Smith has officially won it.

Will Smith Takes Sophia, Our Future Robot Overlord, On A Date