No body likes Trump’s Supreme Court pick, Judge Brett M. Kavanaugh. Why could that possibly be? He seems like such a kind, well-groomed gentleman.

Trump’s nomination of Kavanaugh launched a verbose round of criticism and think pieces in the press. People don’t pay much attention to judges, after all, so it’s up to the journalism industry to let us know what the four one one is. And this guy seems like he’s bad news.

Kavanaugh’s most prominent bad opinion is the belief that the United States’ president should not be on trial. Do you know anyone that might find this to be an especially valuable opinion these days? I can’t think of anyone, but I’m sure there’s some obscure figure kicking around the place who’s worried about being tried for crimes against the spelling and the United States. But whoever it is, isn’t it just so convenient that they basically get to pick their own judge? Even someone as dumb as, say, Trump, would be able to spot the benefit there.

The potential justice also seems to think that net neutrality should be illegal. Apparently, all utilities are in violation of the constitution. I guess your phone company should have been privileging junk calls over your mom’s phone calls all this time! Actually, considering the volume of junk calls I get, that just might be the case.

Oh, and predictably, the dude does not like abortions. Or poor folks. Or non-white folks. And Trump called him “one of the finest and sharpest legal minds of our time,” so you know he must be an idiot.

A Democratic Call to Arms 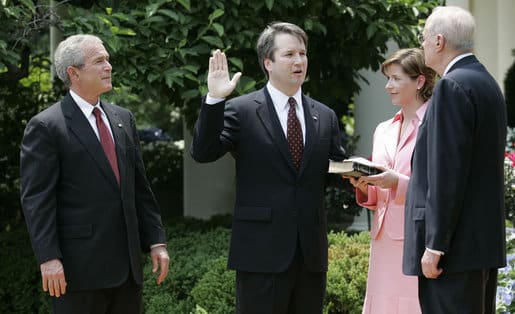 If they held a competition for holding opinions that Democrats would dislike, Kavanaugh would come in first place. Competition would be fierce, but he would definitely pick up the gold medal for the judicial category. So of course Trump proceeded to nominate the dude.

Thank you to all of my great supporters, really big progress being made. Other countries wanting to fix crazy trade deals. Economy is ROARING. Supreme Court pick getting GREAT REVIEWS. New Poll says Trump, at over 90%, is the most popular Republican in history of the Party. Wow!

Also, quick sidebar: that tweet is concentrated insanity. The most popular Republican in the history of the party? Seriously? And he says it like he’s not the one referring to himself, and like he didn’t spontaneously take this “Poll” of nearby staffers while he watched Fox and Friends. You see, one of the ten staffers he asked didn’t hear him shout out “Do you like me?” mostly because Trump says it so often and so desperately that the aides learn to just kind of tune him out while they say “Of course dear, that dress looks lovely on you” without even stopping to think. And do Supreme Court nominations get “reviews,” like books on Amazon? How many stars do you think this Kavanaugh dude has? I want to see the most helpful critical review for his judicial track record, that’s for damn sure.

As a result of their mighty and boringly predictable dislike of Trump’s nomination, the Democrats have launched into a long-shot attempt to block the nomination from getting to a floor vote. Kind of link when Mitch McConnell decided that Obama’s single remaining year in his presidential term meant he couldn’t nominate a Supreme Court Justice. Oh, and also because he was black.

Democrats are trying to pull a same or similar ploy now, throwing themselves bodily in the way of Judge Kavanaugh’s confirmation to the Supreme Court. According to the failing New York Times, congressional Democrats are “painting him as an archconservative who would roll back abortion rights, undo health care protections, ease gun restrictions and protect President Trump against the threat of indictment.”

In response, the White House has lined up a full thousand special interest groups to come out swinging against this fellow, which is a pretty impressive act of ginning up opposition on a literal dime. And the traitor Susan Collins isn’t helping the cause, having the temerity to speak her mind and break the party line. What a terrible thing to do! There’s no way the Democrats would ever have criticized that line of thinking in the past. Then they’d be hypocritical, and we know that politicians are never, ever hypocrites. Except for the ones you disagree with. They all smell.

The idea of a Kavanaugh as the New York Time’s Arch Conservative, like an arch nemesis, is a wonderful image. Just picture Justice Kavanaugh leaning back in his chair, his fingers steepled, his laugh cackling, as he single-handedly bans abortions, gives every insane person a gun, and sends indecent messages to your mother. That’s right: he’s sending lewd messages to literally everyone’s mother, all at once. They might even be dick picks, with his schlong wearing judicial robes. They don’t call him the Arch Conservative for nothing.

Of course, the problem here is that this dude is really bad news. Trump appointing Supreme Court justices is bad news on principle. Even if Trump is run out of office on a rail, his justices will stick around, bedeviling the Constitution until they drop dead of coming on to your mom. And Trump picking one that’s so offensively bad right out of the gate is not a good sign for the future of jurisprudence. Or anything else, for that matter.