Funniest Moments of Jim ‘Big Tuna’ Halpert On “The Office”!

“I ate a tuna sandwich on my first day, so Andy started calling me Big Tuna. I don’t think any of them actually know my real name.” Jim Halpert 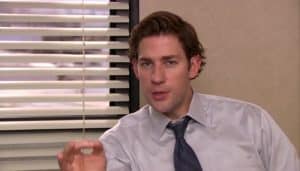 If you watch(ed) “The Office“, than you know that James “Jim” Halpert was a salesman at what was formerly Dunder Mifflin-Sabre up until he was terminated (technically he quit, however he was offered severance pay by Dwight) and subsequently championed his company Athleap.

The main subject surrounding Jim, of course — is his relationship with Pam Beesly. The pair’s conjunction was exceedingly uncomfortable when Pam was engaged to Roy Anderson, a Dunder Mifflin warehouse worker.

It was divulged that Jim and Pam went out together for lunch when they first met and had an awesome time until Jim discovered that she was already engaged to Roy. In the Dundies episode, Pam smooches with Jim in front of everyone during an awards ceremony when she was inebriated.

In the premiere of season 4, “Fun Run“, Jim and Pam confess that they have began dating after the camera crew busts them kissing. The “Dunder Mifflin Infinity” episode is when the office ultimately learns of their relationship.

In Season 6, Jim and Pam are married in the season’s 4th and 5th episodes; their child is born in the second half of the season. Pam and Jim’s second child is born during season 8. In the end, they elect to leave Dunder Mifflin together so Jim can pursue his sports marketing job.

Now without further ado … we bring to you (via the official YouTube channel for The Office US) the best of Jim!