Scott Pruitt Continues To Be Awful, Begs For Job for...

Scott Pruitt is a walking garbage bag, trying desperately to use his assuredly brief stint as a Trump staffer to aggrandize himself and enlarge his bank account as much as he possible can. Apart from demanding dole for himself, family, and friends, he’s living virtually rent free in a posh Washington DC condo while he tries to single-handedly dismantle the Environmental Protection Agency. When he’s not demoralizing employees by running programs counter to the agency’s stated mission, he’s purchasing expensive furniture for his office and trying to get a sired on top of his car so he can race to dinner reservations.

He’s the kind of guy that you’d cross the street to avoid talking to, just for the sheer idiocy of his shenanigans. He’s the dumbest huckster in the Trump administration members by far, and considering the competition of Ben Carson, that’s saying something. The fact that he still has a job is, frankly, astonishing. And not because he is incompetent, though he obviously is. It’s because he’s a liability and an embarrassment that attracts negative attention to himself and the administration a monthly basis.

Right now, there are approximately a dozen federal investigations into Scott Pruitt’s behavior as EPA chief. According to the Washington Post, these include “everything from his first-class flights that taxpayers paid for to a $50-a-night condo rental from a D.C. lobbyist, to a $43,000 soundproof phone booth that was installed in his office, to the most recent revelations about using his subordinates at the EPA for all sorts of things: to look for a mattress, to pick up his dry cleaning, to help in the search for his wife to find a job.”

Trump, however, does not seem to care. Maybe he doesn’t get briefed on Scott’s goings on? He likely lacks the attention span for it. 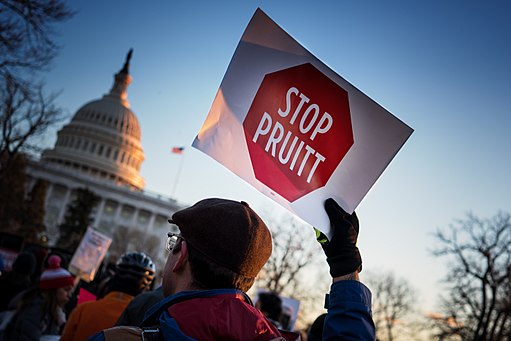 The most recent Scott Pruitt related embarrassment involves using his connections to scrape up a cushy job for his wife. He got a top aide to contact Republican donors to try and get his wife a job. They called Chic-fil-A, activists, and donors, many of whom run substantial business operations. Scott, however, does not seem to realize that this is both illegal and totally shitty. And does little Mrs. Pruitt have so little capability that she can’t even track down her own cushy corruption jobs?

Pruitt is basically knocking on people’s doors to ask if they’ve got any corruption money they can pay him. He’s like a corruption Girl Scout hopping to dig up some extra sales by just asking if he can have the money straight out. When one donor said that it would be a conflict of interest for him to hire Pruitt’s wife (DUH!), Scott didn’t stop even then. Instead, he did his best to pick the donor’s brain for other possibilities.

Eventually, Pruitt landed her a job at the Judicial Crisis Network, an organization “dedicated to strengthening liberty and justice in America” by, apparently, shilling for the most conservative Supreme Court appointees imaginable. The JCN did confirm that they worked with Mrs. Pruitt as an “independent contractor.” The group was apparently satisfied enough with her work to give her a salary of $200,000. Mrs. Pruitt, however, probably got sick of having responsibilities and decided the Pruitt family could instead subsist off her husband’s graft, and left the organization voluntarily.

Not that her departure solves anything for Pruitt! This is just another tick mark next to his name in the “obviously corrupt” column. Another federal investigation bound to dig up dirt, and another obvious indication of the Trump administration’s oligarchical corruption. There’s barely any daylight between Russia and Trump, not only on personal relationships, but also on style of government.

Expensive Pen Agency, or Why Does Scott Pruitt Still Have a Job?