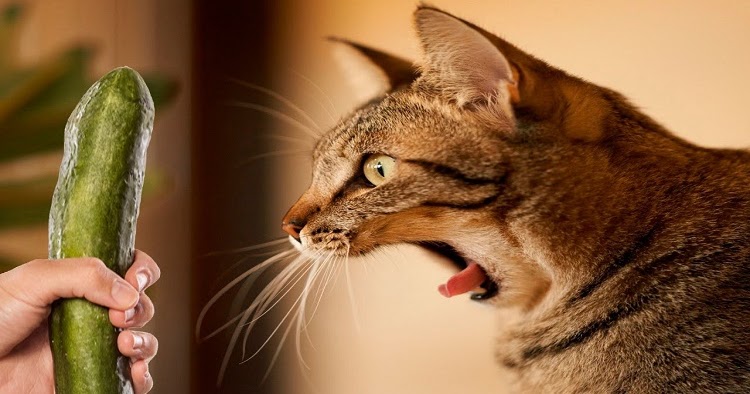 Supported by evidence of more than a dozen YouTube videos, it appears as though there’s something about cucumbers which cats find unjustifiably frightening!

Upon detecting a cucumber nearby, our feline dearies leap into the air, scurry away, or/and get ready for battle against the invading green abomination. So, what’s the deal with that?

In the majority of the Youtube videos, feline owners are seen sneaking up behind their pets as they’re facing the other way — largely eating — and positioning the green, lengthened veggie right behind them. As the cat turns around and witnesses the unforeseen item, it goes bonkers, leaps into the air, and gets away from the green demon as fast as it can!

IFL Science implies that it could be that the cats’ response is not about the cucumbers explicitly, but the fact that the cucumbers were situated nearby without the felines knowing. Generally speaking, cats would be fearful of anything that was able to ‘sneak up’ on them like that. Meantime, Jill Goldman, a certified animal behaviorist, told National Geographic that it is practicable that cats’ initial instinct is to presume that the cucumber is a snake, which can potentially be a lethal predator.

“Cats have to be suspicious of the unknown: It could represent the danger of a snake or another predator,” says Dr. Roger Mugford, a specialist in animal behavior. “I suspect that there would be the same reaction to a model spider, a plastic fish or a human face mask.”

Cats are known to be wary of anything that moves quickly, makes a bunch of noise, or lights up capriciously: in essence, anything that they do not fully fathom (which isn’t different from most animals really, humans included). It is too worth adding that cats are mainly solitary creatures, and humans are the most sociable animals — thereby, they’re befuddled enough by us as it is — freaking them out with unanticipated cucumbers likely isn’t adding value to their lives.

The following video explains further why cats are afraid of cucumbers (begins at the 7:40 mark):

The 15 Most Famous Cats On The Internet