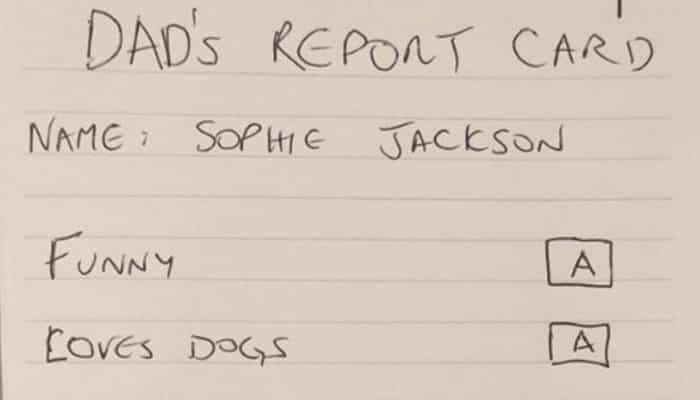 Sometimes no matter how hard you study, the grades you want or need are just beyond your reach. This fact is particularly hard to swallow when the reason is something you have no control over, such as a disability.

10-year-old Sophie Jackson, who has autism, felt she’d let everyone down when she received a report card filled with D grades. Fortunately, her dad Shane Jackson was there to make sure his daughter knows how proud he is, no matter what a piece of paper from her school says.

To prove to Sophie that there is more to life than grades, Shane made her a new report card featuring everything that makes her special, including items such as “funny” and “imagination.” Of course, she got all As.

My daughter who has ASD received straights Ds on her report today. She cried and said “I’ve let everyone down” this is my report card for her. pic.twitter.com/godh2iiQ88

Unsurprisingly, Shane’s heartfelt gesture has gone viral on Twitter, and as of writing has been retweeted more than 12,000 times. Not to mention the thread is filled with tons of sweet responses from followers around the web who were touched by the story.

This is beautiful Shane. It looks like you and Sophie have discovered the things that really matter 🙂

Actually D is for Distinction

You sir made me cry. Your handwriting looks identical to my father’s who has been gone for almost 9 years … He once too gave me something like this …

Thanks Shane. You just gave me the solution to my year 6 son’s reports. So proud of him, at this moment he is on stage, in combined schools band. Band playing in a night of local High School school performing Arts.I drew the short straw, had to stay home and look after twins.

Every little thing counts, keep up the progressive thinking! It might not change the blinkered approach of mainstream but it works wonders on our children with ASD??

Shane has also created an account to showcase Sophie’s artwork called “SophieSideWaysSmile,” and we have to say, we think he’s got a budding talent on his hands.

ok this is the first drawing ive posted pic.twitter.com/EvgYJIEn97

hey guys I drew this one its called an Indominus Rex pic.twitter.com/JjMO7t8TXz

Sophie has also made her dad his own report card, and it’ll definitely make you giggle.

hey, i thought i would do a report card for my Dad. if anyone else wants to do one for their dad or mum, you can reply with a photo of it to this tweet. should be fun! pic.twitter.com/EOplorNlQS

Looks like he only got a C in wrestling though. Oh dear…

The Blood Test, The Swab Test, and The Saliva Test      Essentially, there are three general types of COVID-19 testing produced so far. One is the rapid test, the second is the saliva test and the other is the swab test. The rapid test (also known as the anti-body test) uses blood samples. The swab test… END_OF_DOCUMENT_TOKEN_TO_BE_REPLACED

The COVID-19 pandemic is one of the biggest modern pandemics known in history. Currently, there are more than five million confirmed cases in the world, with a total of 333,000 deaths. A total of 1.6 million of these confirmed cases are in the US alone. The world is currently in a race of finding a… END_OF_DOCUMENT_TOKEN_TO_BE_REPLACED

Despite concrete data and research, people’s opinions will always be diverse when it comes to a variety of topics including religion, politics, gender, and more. Denial is a common reaction to many important discussions and serious world events. The COVID-19 pandemic does not differ from any issues and is subject to opinions from critiques all… END_OF_DOCUMENT_TOKEN_TO_BE_REPLACED

Back in January, when the Wuhan, China coronavirus broke out, it didn’t make it to the front page of newspapers, in print or virtual form. Today, January feels like a lifetime away. Like it or not, people around the world have adapted to the new normal – staying at home, frequent hand washing, and social… END_OF_DOCUMENT_TOKEN_TO_BE_REPLACED

Since the beginning of the year 2020, the whole world has been stupefied by the rapid spread of a deadly coronavirus known as COVID-19. World superpowers in the West were unable to prevent the virus from reaching their borders. Because of this fact, the novel coronavirus COVID-19 became a world-wide pandemic no less than three… END_OF_DOCUMENT_TOKEN_TO_BE_REPLACED

For months since the start of 2020, the attention of the world has focused on immediate response efforts to contain and combat the novel coronavirus, also known as COVID-19. The deadly virus has pushed millions of people into isolation.  This kept people in their homes for weeks and months away from their work, their friends,… END_OF_DOCUMENT_TOKEN_TO_BE_REPLACED