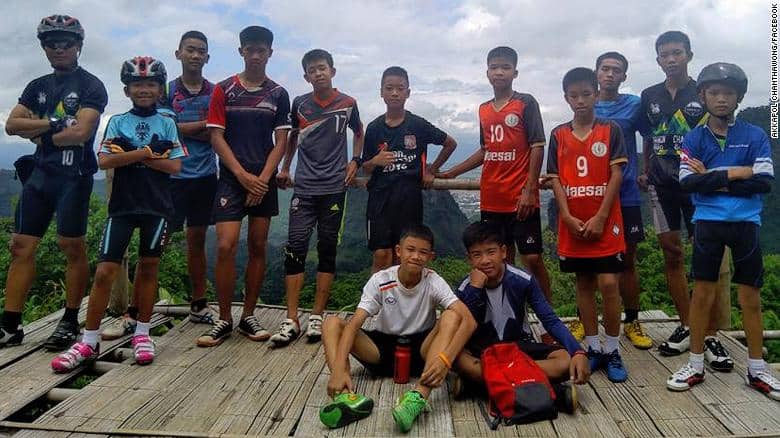 Family members greeted the ameliorating news with tears of happiness and relief, fist-punching the air when they heard that their boys were alive and well.

“I confirm they are all safe,” Narongsak Osottanakorn, governor of the local region Chiang Rai, informed reporters on Monday night.

Rescue teams reported that they discovered 12 youths and their soccer coach alive in a cave in Thailand nine days after the bunch went missing.

A Thai Navy released a video via Facebook seemingly displaying the moment the group were found. In the near 5-minute clip, the boys are kindled by torchlight whilst a diver can be heard speaking out loud to them.

The boy soccer team, aged 11 to 16, and their 25-year-old coach went missing after entering the cave on June 23rd and becoming trapped by rising floodwater, sparking a dire round-the-clock search plagued by incessant downpours that initially stopped divers going in.

International rescue teams — which included Thai Navy SEALs as well as experts from the US, Australia China and the UK — had been working to reach a vast deep chamber, colloquially known as Pattaya Beach, where the missing kids were believed to have taken refuge.

I’m crying in taxi right now. They found all the 13 boys in the cave! #13ชีวิตต้องรอด

“I was happy to hear the cheering from the rescue workers. I felt that I have hope that I am going to get to see my son alive,” expressed Adisak Wongsukjan, whose 14-year-old son, Ekarat, is one of the juveniles seen huddling in the cave.

“I want to hug my son… usually our family sleep in the same bed together. We are a very close family.”

Dog Rescue Nearly Failed After Spaniel Falls Over Cliff, Refuses to Be Rescued