People in the UK Are Desperate to See This Baby...

by Sophie Lloyd 5 years ago8 months ago

If you think the news surrounding Donald Trump couldn’t get any weirder, well, it turns out it can. A giant “Baby Trump” could fly over London during the US President’s UK visit in July, thanks to activist Leo Murray.

Murray has launched a crowdfunding campaign to fly a colossal inflatable Trump over the city. The model depicts the former business mogul as a baby, complete with diaper. Describing the project, Murray said:

“Donald Trump is a big, angry baby with a fragile ego.

He’s also racist demagogue who is a danger to women, immigrants and minorities and a mortal threat to world peace and the very future of life on earth. Moral outrage is water off a duck’s back to Trump. But he really seems to hate it when people make fun of him.

So when Trump visits the UK on Friday the 13th of July this year, we want to make sure he knows that all of Britain is looking down on him and laughing at him.”

Still, it’s pretty clear the president doesn’t have many fans in the UK. So far almost 50,000 people plan to protest his arrival next month, and Murray’s campaign has already more than doubled it’s target of £5000, with £12,000 raised at the time of writing.

The proposed balloon will be six ft by six ft, making it impossible to avoid. Just look at this image that puts it to scale. 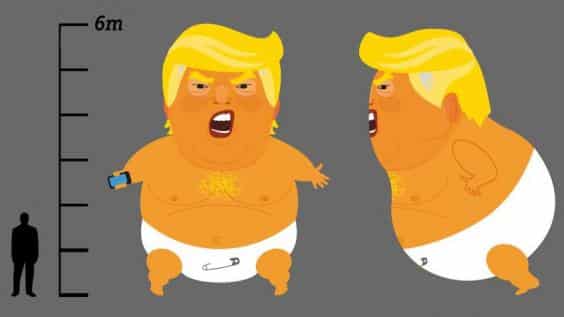 Still, there’s a catch. Murray needs permission from the Mayor of London, Sadiq Khan, to be able to launch the inflatable from Parliament Square, and so far his team have said the balloon doesn’t qualify as a protest.

According the Mayor of London’s offices, the only type of protest legally allowed on the property is “a gathering of people, with banners and placards.”

As a result, Murray has set up a petition for those who wish to see Baby Trump soar, with over 6000 people signing so far.