Is The World No Longer Safe For Liars? Sarah Huckabee...

Sarah Huckabee Sanders might be legally allowed to lie for the President. But it turns out there are consequences for being the tool of a hateful, dishonest administration.

Last week, Sanders was ejected from the Red Hen restaurant in Lexington, Virginia, near Washington, D.C. Apparently the owners of the restaurant weren’t too keen on having her in their establishment. And considering that bakers don’t have to make cakes for people they dislike, the owner figured they don’t have to serve people they dislike. And legally, they are correct. Not that this makes Sanders very happy, but if irony was icing, this cake would be thick.

Last night I was told by the owner of Red Hen in Lexington, VA to leave because I work for @POTUS and I politely left. Her actions say far more about her than about me. I always do my best to treat people, including those I disagree with, respectfully and will continue to do so

That’s the Sanders I recognize… she’s so well known for treating people with kindness and respect.

Business have fairly broad rights to eject patrons. If someone is being disruptive or making trouble, they can be thrown out and banned from returning. But people can also be thrown out for any other reason that isn’t considered a “protected class.” These factors, like age, disability, national origin, pregnancy, race/color, religion, or sex, can’t be considered when ejecting someone from your establishment. For example, you can’t thrown out a patron because of their race. But if they’re trying to start a fight, then you can thrown them out. Sarah Huckabee Sanders has learned, to her chagrin, that lying freely for a widely detested president is not a protected class. 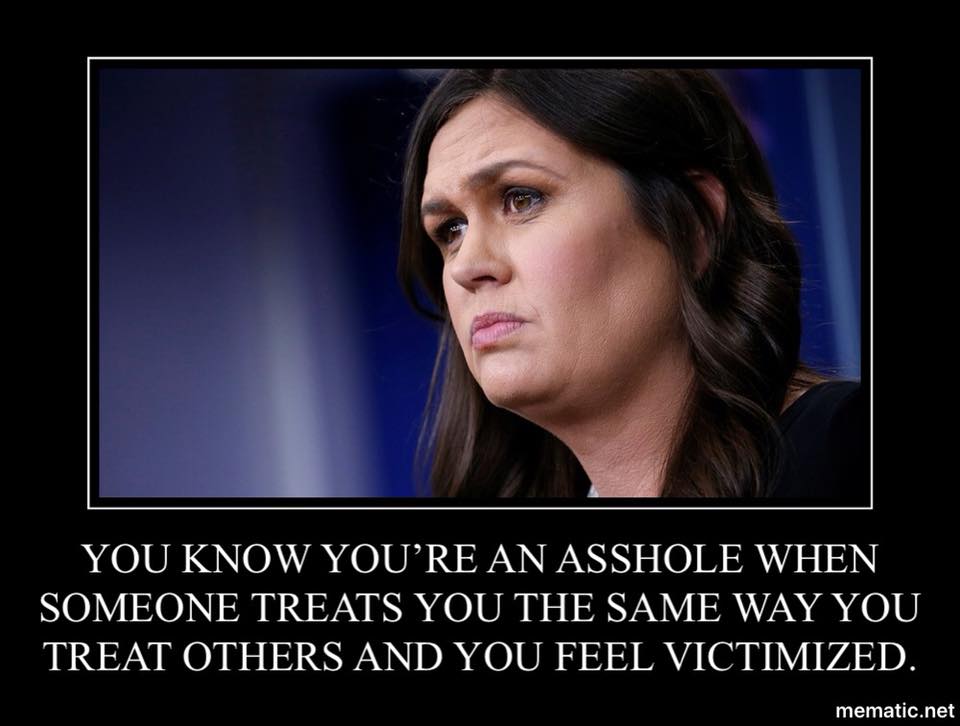 Sadly, Sanders is now wondering if the world is no longer safe for liars like her. It is apparently news to here that people judge you for the content of your character. Of course, she’d be likely to say that she meant those other people should be thrown out, not her. She’s white! That means she’s protected—isn’t that how fascism works? Sanders is a victim of the golden rule: she’s being treated in the same way she should treat others. And the smell of Schadenfreude is thick in the air.

Big Daddy Trump, always looking for a target for his Twitter ire, fired back, protecting his minions with some strong language of his own:

The Red Hen Restaurant should focus more on cleaning its filthy canopies, doors and windows (badly needs a paint job) rather than refusing to serve a fine person like Sarah Huckabee Sanders. I always had a rule, if a restaurant is dirty on the outside, it is dirty on the inside!

This is a lot like when your fastidious nan says the toilets are dirty at Red Lobster, so you shouldn’t go there. Considering that your Nan’s favorite dish is dry pasta, it’s probably not work taking her recommendation on dining options. Also, you can tell that he’s literally never been there and probably just looked at the Street View pictures. Oh, the paint is peeling, must be a shithole! And for real, who cares if Donald recommends a restaurant? The guy looks like he eats Big Macs in bed and dabs his cheeks with the bed sheet when he’s done.

The Red Hen will likely never recover from such scathing criticism. Oh wait, it turns out they actually got major praise from half the country and will probably have a line out the door for the next six weeks. How can they possibly survive?