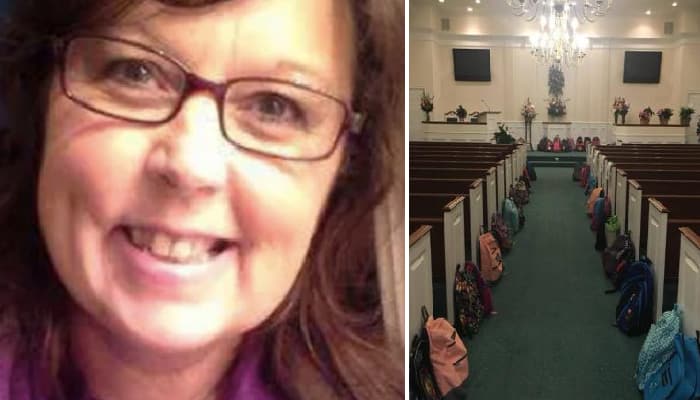 Last month a study by the US Department of Education revealed that more than 90% of public school teachers buy supplies for students with their own money.

On average £400 of a teacher’s salary a year goes on equipping their students with necessary stationery and supplies due to the underfunding of schools, and it didn’t make a difference whether they worked in cities, the suburbs, or rural areas.

Tammy Waddell, a teacher in Forsyth, Georgia, was known for going the extra mile for her students. Spending 30 years in education, Tammy worked hard to improve the lives of young people.

Sadly, the teacher passed away on 9th June at the age of 58, after a long battle with colon cancer. Still, her final request made sure that local school kids would be taken of in her absence.

Two weeks before her death, Tammy told her son that she didn’t want flowers at her funeral. Instead, she requested that people to donate bagpacks full of school supplies for children in need.

My cousin’s final request at her funeral was Backpacks full of supplies for needy students instead of flowers. A teacher to the end. @TeachersNet @edutopia @EdWeekTeacher pic.twitter.com/eGig25tYwH

Waddell’s cousin, Brad Johnson, told CNN: “This was just the kind of teacher she was, and this is a reflection of her heart. She was a teacher first, all the way.”

Johnson shared photos from Waddell’s funeral at the McDonald and Son Funeral Home and Crematory. One shows church pews lined with bagpacks, all donated by friends, family, and colleagues – of which there are 130 in total.

Another shows several of the 100 teachers who turned up to be honorary pallbearers, who assisted in carrying the bagpacks back to the school.

Honorary pallbearers… Teachers who had taught with her through the years… pic.twitter.com/CyB2pBbBNy

“She had about 100 teachers as honorary pallbearers who carried the backpacks out and back to their public schools,” Johnson explained. “It was heartwarming.”

Waddell had beaten colon cancer once before, but unfortunately the disease returned in August 2017. This time, doctors informed her she didn’t have long left to live, so she retired after three decades as an elementary school teacher.

Since sharing the funeral photos, Johnson has been contacted by TES resources, a non-profit that helps educators across the globe. The organisation has decided to honor Waddell with a donation of even more school supplies for Georgian students. Johnson has also shared on Twitter where others can donate too.

back packs can be sent to: pic.twitter.com/62D6ALVF7L

Tammy’s online obituary describes her as a person with a “passion for literacy and believed that every child deserved an opportunity to learn.” We’re sure she’ll be sorely missed!