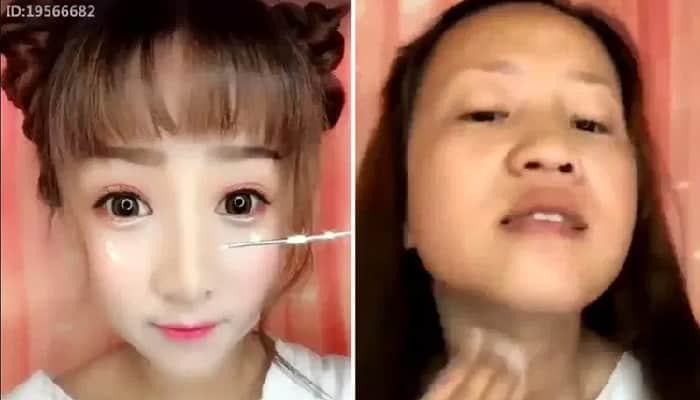 Nobody’s perfect, and we all have bits about our appearance that we don’t love. Over time, most of us learn to love the face God gave us (or least to put up with it), while others go to more innovative measures to hide their flaws.

Forget film monsters and special effects, some people are apparently using prosthetic makeup for their every day look.

This video one user uploaded to Twitter is a perfect example. A compliation tape, it shows Asian women who use prosthetic makeup or “clay” to transform everything from noses, to chins, and even the shape of their forehead.

Omg this is NUTS. Imagine having to sculpt your nose with clay every day ? pic.twitter.com/EWclKst5hp

Seriously, imagine having to wake up every day and put your chin on!

The video is a “backward” tutorial, meaning the women are wearing their everyday looks at the beginning and removing each individual add-on until they reach their natural features. It now has over 77,000 views, and unsurprisingly, lots of comments from fascinated followers.

This is too much. I’ve never seen the this nose sculpting

Other elements the women use to alter their appearances include wigs, thick layers of light creams and foundations, and contacts used to create the “big-eyed” look that is popular in Japan.

The end result is pretty much the same for each woman featured – big eyes, light skin, and a long, slender face. One women even went so far to change her ears.

I wanna know how they just plucking them contacts right out they eye. Like what IS the secert sis…

Still, these girls have serious SKILLS.

Nevertheless, some users didn’t believe that anyone would go out in a full-face of prosthetic makeup on a daily basis, but others quickly shut that theory down.

Speak for yourself…… They do

Whereas many male Twitter users said they felt “betrayed” by the women in the video, and that women wearing makeup gives them “trust issues.”

the men in my mentions going on & on about trust issues, having to take a woman swimming, etc., are crazier than the video lmfao I wouldn’t believe a pretty lady was actually talking to you either, so I feel you, ugly.

Maybe guys, instead of worrying about how it makes you feel, worry about why these women feel the need to so drastically change their appearance in the first place? Just saying.

The Michelle Obama Podcast was released on the 29th of July and can be streamed on Spotify, both for free and premium users. The world is currently hyped that the Former First Lady of the United States has released the first episode of her latest podcast. What made listeners even more excited was when she… END_OF_DOCUMENT_TOKEN_TO_BE_REPLACED

Research in Britain has deduced that there are a total of six “general” classifications of COVID-19 symptoms. The research, originally published in June of 2020, has revealed that the symptoms of COVID-19 can be generalized into six different categories. This is based on the data collected from a symptom tracking app. It has been widely proven… END_OF_DOCUMENT_TOKEN_TO_BE_REPLACED