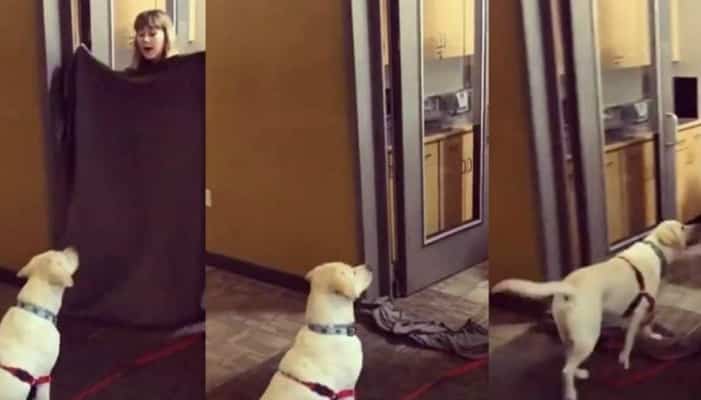 As far as animals go, dogs are supposed to be pretty intelligent. They’re smarter than cats (sorry, science says so), and are at least as brainy as a toddler. Although, these canines may convince you otherwise.

The #WhatTheFluffChallenge is the latest pet trend to go viral, and it’s doing man’s best friend a heckin’ confuse.

Basically, people have been filming themselves holding up blankets and hiding behind them in front of their dogs. They then drop the cover and jump speedily of the way, as if they’ve evaporated into thin air. Cue panicked puppers wondering where their owner has gone!

As pretty much all woofers are good girls/boys, once they’ve got over their initial confusion the dogs go searching for their humans. Eventually, even the slowest dogs realise their owners are only around the corner, but it’s adorable while it lasts.

Not to mention the pure joy when they see their owner hasn’t really disappeared will make your heart melt.

When the PXY pup rolls thru, ya gotta do the #WhatTheFluffChallenge. pic.twitter.com/p5M6sQzsP9

This is one very confused doggo

“I have absolutely no idea what’s going on”

You can’t fool this corgi

Even the fails are adorable

We’ll just leave this compliation here for you to enjoy…

The #WhatTheFluffChallenge is basically people pranking their dogs with this ‘magic trick’ and it’s absolutely amazing. ? pic.twitter.com/qQxHf3pVol

Presidential pardons are one and many in the history of the US. There are many times when US Presidents granted reprieves for their citizen’s misdeeds. The US President may grant a pardon for any individual, including himself, for any crimes done against the country and its citizens. This issue of Presidential pardons has been trending… END_OF_DOCUMENT_TOKEN_TO_BE_REPLACED

President Biden has tapped Rachel Levine to be his assistant secretary of health, making her the first publicly transgender federal official. In 2017, Democratic Gov. Tom Wolf appointed Levine to her current post, making her one of the few transgender persons serving in appointed or elected positions countrywide. Biden said in a statement: “Dr. Rachel… END_OF_DOCUMENT_TOKEN_TO_BE_REPLACED

The minimum wage hike has always been an issue in the US for the past decades. With only a few hours before Biden gets inaugurated as the President of the United States, people are excited for all his promises to take place. One of these is his plans to raise the minimum wage of workers… END_OF_DOCUMENT_TOKEN_TO_BE_REPLACED