Criminal Posts That He’s Going To Get Shot On Facebook...

Eric L. Ramsey knew that he was going to get shot. He even posted a message about his feeling on Facebook. Well, it turns out that Ramsey was right. The 30-year-old man was fatally shot by a police officer in Michigan earlier this week.

According to CNet, police were searching for Ramsey last night in Michigan after he allegedly kidnapped and raped a woman from Central Michigan University. Ramsey also allegedly set a house on fire, stole a sanitation truck, and crashed into two Michigan State trooper vehicles.

Needless to say, Ramsey had a hunch that the night was going to end badly for him.

At 1 am Ramsey wrote on a friend’s wall on Facebook: “It’s been real, bro, wish I could have hung with you once last time. Love you, brother.”

And shortly before his final showdown with police he took out his phone and wrote that he was going to get shot Facebook: “Well folkes im about to get shot. Peace.” 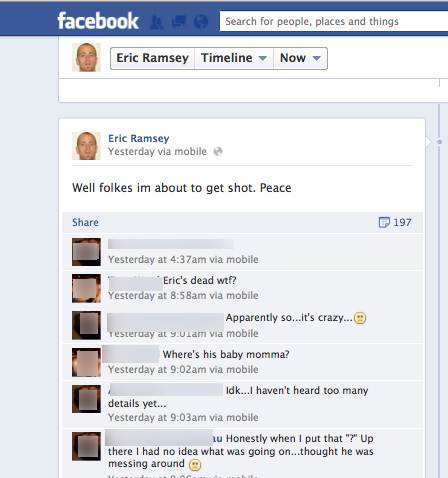 A state trooper would shoot and kill the 30-year-old man shortly after his post.

“A short while later, a Crawford County Deputy located the sanitation truck, and the suspect ended up hitting the deputy’s car head on. The deputy then got out of the patrol car, ran up to the cab of the pickup, and fired shots, fatally wounding the suspect.”

Criminals have used social media in the past. Some crooks use Facebook, Twitter or Youtube to brag about their crimes (which usually ends up in them getting caught) while others use the internet to make threats about potential future crimes. In September of last year a hostage situation unfolded live on Facebook.

Why do you think Ramsey turned to Facebook in his final moments?