Donald Trump might call any negative storyline about himself “fake news,” so perhaps we should take a moment to look at some actual fake news. Or, fake tweets. There are so many parody Twitter accounts and fake tweets out there, and surprisingly some of them are actually hilarious. There’s even a website you can go to and make your own fake tweets that appear to be coming from the president! These are a few of my favorite fake Trump tweets so bad that they’re good.

“@Jesus, such a loser. Washes people’s feet. Very dirty. Would be nothing without daddy. Mom wasn’t a virgin, needs to be said. SAD.”

If this had been tweeted about anyone else other than Jesus, it would be 100 percent believable. It’s written using all of the right Trumpisms without being a total Trump overkill, which is a mistake made by many other fake tweets. The writer used loser just once before insulting both the man as well as his parents and ended the tweet in a single word. SAD. It’s just perfect! 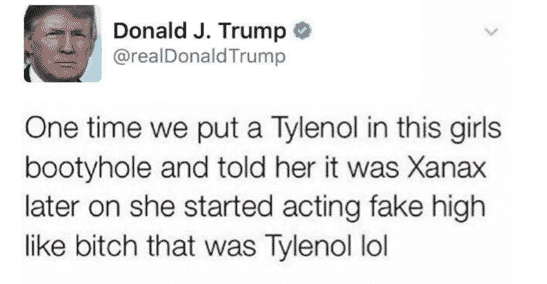 While this tweet is far from something our president would be foolish enough to write himself, it kind of sounds like something he’d do. Or would have done during the height of him womanizing days. Xanex is hardly a recreational drug, but that’s kind of what makes it so funny. That and the hilarious imagery this fake tweet gives us.

That Time Trump Went To The Moon

The Moon Landing May Have Been Phony Before I Got Elected, But Now It's Real #SpaceForceRecruitmentSlogans

“The moon landing may have been phony before I got elected, but now it’s real #SpaceForceRecruitmentSlogans”

This might have been sourced from a Trump parody Twitter page, but that doesn’t make it any less entertaining. Trump would totally take credit for something that happened decades before he was even considering a career in politics, including landing on the moon. Like they’d ever tell him whether or not that was legit! He’d be the first one to blab. “Go to the moon and write ‘Trump Sucks’ in the dirt.” #SpaceForceRecruitmentSlogans

“@MotherTeresa not an actual mother, sources say ‘undateable.’ Can’t get a man. Pathetic.”

Another fake tweet that truly got Trump’s personality right. Hit the nail on the head, as they say. While Mother Teresa is long gone and not exactly someone Trump would tweet about, I can picture him saying something just as similar about Hilary Clinton. Or Rosie O’Donnell. Or any of the other dozens of women Trump can’t stand.

“All Vietnamese people with the last name Nguyen are getting deported. Y’all take up too many spots in yearbooks.”

If you didn’t know, Nguyen is the most popular Vietnamese family name. It would hardly be surprising to see yet another tweet from the president regarding political information and laws that should be left to a more formal announcement, but that’s just not his style. Neither is the way this tweet is written, but it’s still pretty funny. I’ve never met a Nguyen before, but I have a feeling I will now after seeing this.

That Time Trump Called Out Rosa Parks For Having A Car

It would be just like Trump to insult an activist of the civil rights movement and claim that the black community loves him all in a single breath. If Ms. Parks were still alive, perhaps this tweet would have been believable. Even though Trump has said some seriously racist crap over the years, this might actually be too tame for him. Trump does, however, give Kanye West credit for doubling poll ratings among black Americans, something the MSM has reported on quite a bit.

It’s the Democrats fault that I'm ripping babies from their mothers' arms! They say they won't negotiate with a terrorist who kidnaps children and holds them to ransom! Now even Ivanka's upset because the kids are sitting in cages when they could be making shoes for her to sell!

“It’s the Democrats fault that I’m ripping babies from their mothers’ arms! They say they won’t negotiate with a terrorist who kidnaps children and holds them to ransom! Now even Ivanka’s upset because the kids are sitting in cages when they could be making shoes for her to sell!”

He’s always blaming the Democrats. For the healthcare system. For school shootings. For the abduction of the rainbow and its use as a symbol for the LGBT community. While this particular tweet is coming from a Trump parody page, it’s spot on. Democrats are being blamed for immigrant children being ripped from their mother’s arms and will continue to be blamed until we start supporting that damn wall. Ivanka is smart enough to know that having these kids in cages is the best way to get them to work on her line of shoes, but I’ll let that part slide.

That Time Trump Thought He Was Better Looking Than Shrek

“Shrek is overweight and Fiona is enabling him. Sad.”

Far from political, this fake Trump tweet simply had me in a fit of giggles. Shrek is hardly overweight, he’s just a bit big boned. It kind of comes with being an ogre as their natural diets are high in protein. Fiona loves her big green ogre and is with him of her own free will, which is more than we can say about Melania. Her big orange ogre has held her captive for over a decade now, the poor girl.

That Time Trump Revealed How We’d Pay For The Wall 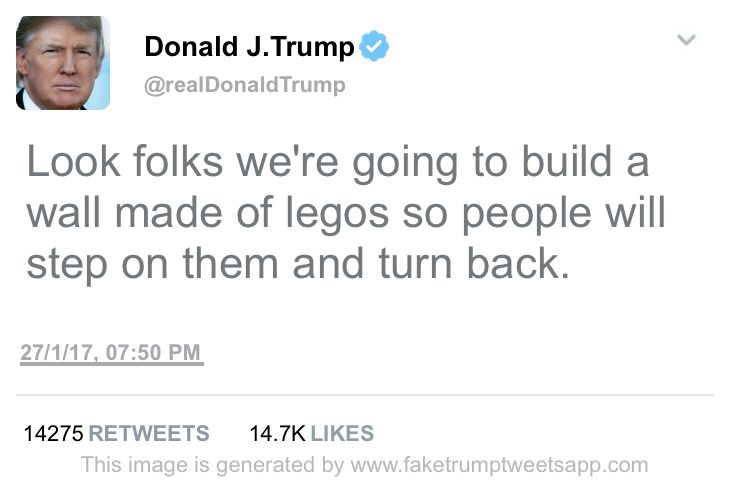 “Look folks we’re going to build a wall made of legos so people will step on them and turn back.”

This fake Trump tweet solves the big mystery of how we’re going to build that wall: Legos. What a genius idea. Everyone who supports the wall can donate their unused or old legos, and Trump can spend the rest of his presidency over on the border building it. Even though the pain caused by stepping barefoot on a lego likely won’t deter Mexicans from crossing the border, it’ll keep Trump occupied long enough so that we can be sure our country will still be standing come 2020.