Hilarious Photos Of Trump’s Hollywood Star After A Democrat Got...

by Rose Burke 5 years ago11 months ago

Donald Trump’s star on the Hollywood Walk of Fame has been targeted by vandals ever since he announced his decision to run for president, and Democrats seem to come up with amusing ways to do this. Democrats and Liberals have got to be some of the funniest people in the world to not only come up with some of these ideas but to execute them perfectly so that the entire world gets to laugh along with them. These are the most hilarious photos of Trump’s Hollywood Star after some Democrats got their hands on it. 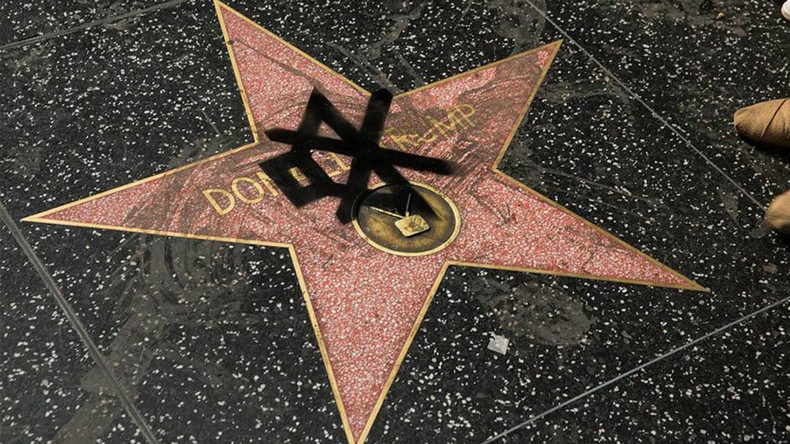 Donald Trump isn’t exactly known for his words of wisdom, which is what this artist symbolized in a masterpiece of the mute button over his name on the star. From his tweets to his press conferences, the man seems to vomit stupidity every time he opens his mouth. We can ignore his moronic tweets and change the channel every time his big orange head makes an appearance, but the words are stilling come out, and his supporters are just eating it up. If only we could put Trump on mute in real life. 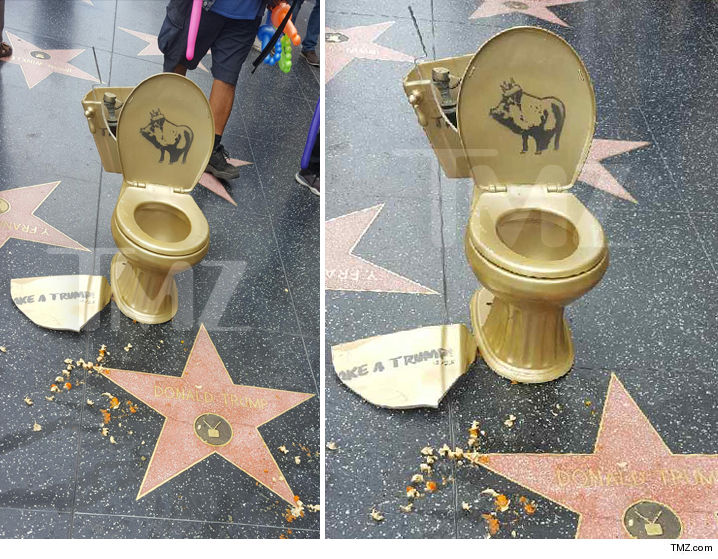 Trump’s actual gold toilet might not look as dapper as this one, but there’s no doubt that this commode would fit right in with the president’s preferred decor. His ignorance might even lead him to believe that the crowned pig and creative slogan are compliments. “Take a Trump” likely refers to taking a dump or the unique excrement that was found inside this golden throne. Reports described the substance as gross and wet, but I’d like to think that it was an imagined and utterly unique sample of what might actually come out of Trump’s anus. Either that or someone drank too much and puked their brains out in what looked like a perfectly functional toilet.

The Wall Of Fame

With Trump being so keen on building a wall between the United States and Mexico, an artist decided to give him the only wall he’ll ever be able to afford. And at no cost to him or taxpayers! It might be slightly smaller than what he had in mind, but beggars can’t be choosers. This wall even comes with teeny tiny barbed wire and the kind of American flag you might find keeping your burger together at some of those more patriotic food trucks. Perhaps this assumed liberal artist was actually a Republican attempting to protect Trump’s star from all of the urine and feces that somehow manages to smear itself across the president’s name. Unlikely though. Republicans aren’t that smart. 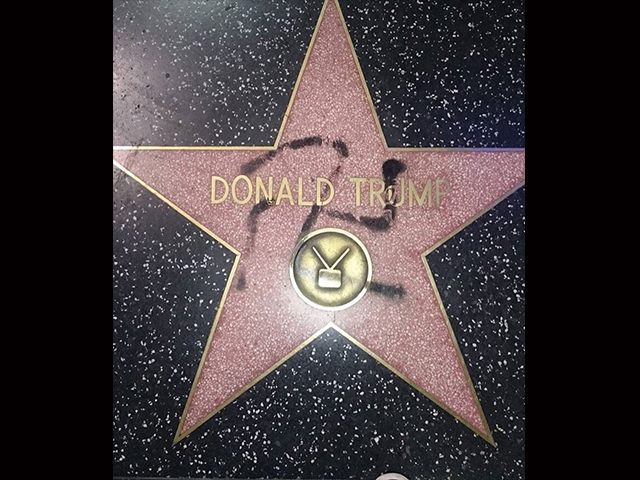 While the artwork here could use some work, someone felt that Trump’s Hollywood Star should honor his commitment to the Nazi regime and their overall philosophy of doing anything to put down people of color. Making America white again, while impossible, has proven to be Trump’s true purpose during his time in the Oval Office as he has proven that racism, white supremacy, and the KKK not only still exist these days but is actually quite rampant throughout our country. Like the Nazis, we can only hope that these people will be appropriately punished when Trump is finally out of office. During a Resist and Equality March in Los Angeles, participants walked right by Trump’s star on the Hollywood Walk of Fame, an opportunity that certainly couldn’t be overlooked. The star quickly started collecting a number of stickers to support the LGBT community as well as others against racism, sexism, and other topics that the big orange doof in charge can’t seem to understand. As the day went on, Trump’s star became unrecognizable as it was devoured by stickers of resistance. By the end of the day it looked more like this: 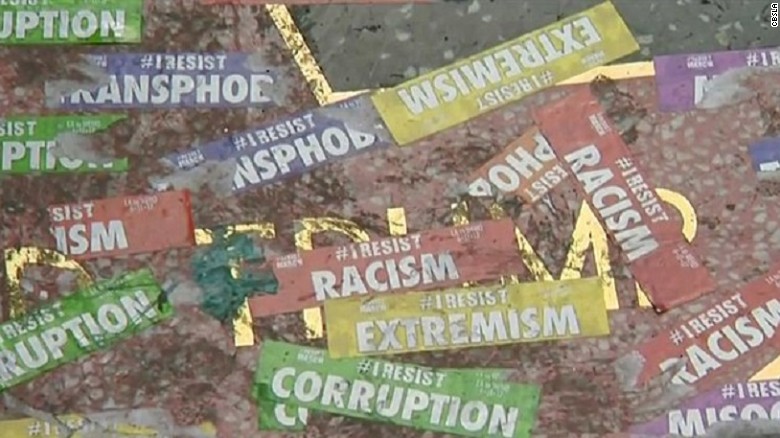 Apparently, some stickers or a funny hoax wasn’t enough for James Otis who decided to take a sledgehammer and a pickax to the president’s Hollywood star. His original intention was to steal the star and sell it to raise money for the women that had accused Trump of sexual assault, but that task might have sounded easier than it ended up being because he couldn’t get it done. Instead, he smashed it to pieces and ended up getting arrested the following day. Trump’s Hollywood Star was repaired soon after while Otis was stuck with three years probation and a bill of $4,400 to cover damages. He has since learned his lesson and plans to keep all future protests in the form of hilarity.

A Decorated Star After The Damage 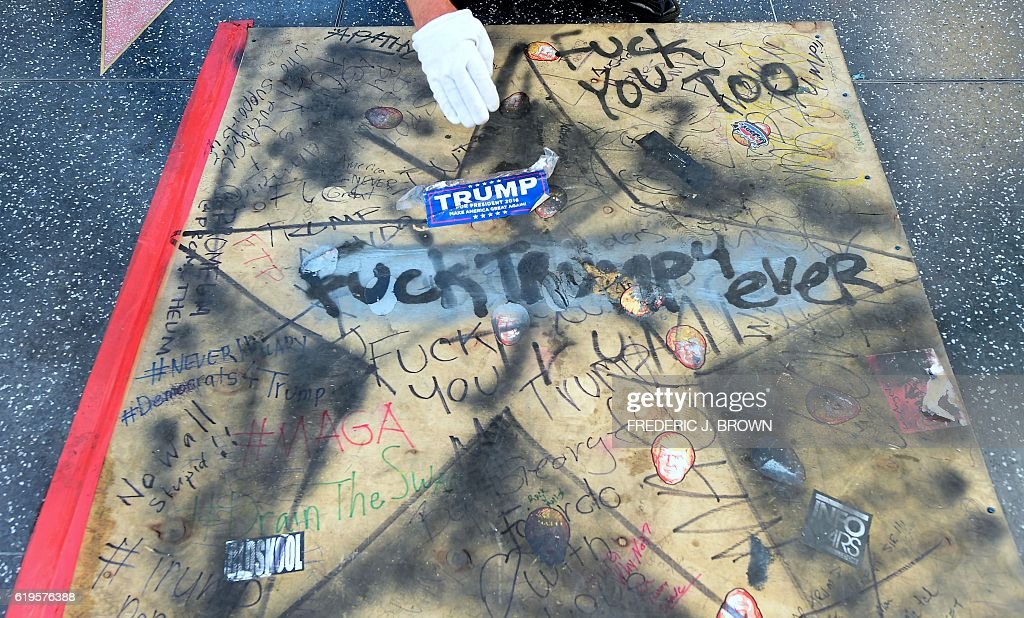 After Trump’s star was destroyed by Otis, it was decorated by those passing by before repairs could be done. Someone decided to place a Trump bumper sticker over the damaged area so that people would know exactly where to scribble their remarks. The comments were a mix of both Trump haters and Trump supporters, but some of my favorites are “No wall stupid!” and “Apathy.” Oh, and how could I miss “Drain the swamp.” Our furry friends might not be able to vote, but that doesn’t mean they’re incapable of having their own political feelings. It would seem that fido here isn’t a fan of Trump, which he was able to show by leaving his own personal mark behind. And he’s not the only one. There is a slew of photos on the internet of dogs doing their business on Trumps Hollywood Star. There are also photos of a ton of humans doing the same things, so be careful what you Google. FYI, it’s only cute when dogs do it guys. Here are a few more photos to enjoy: 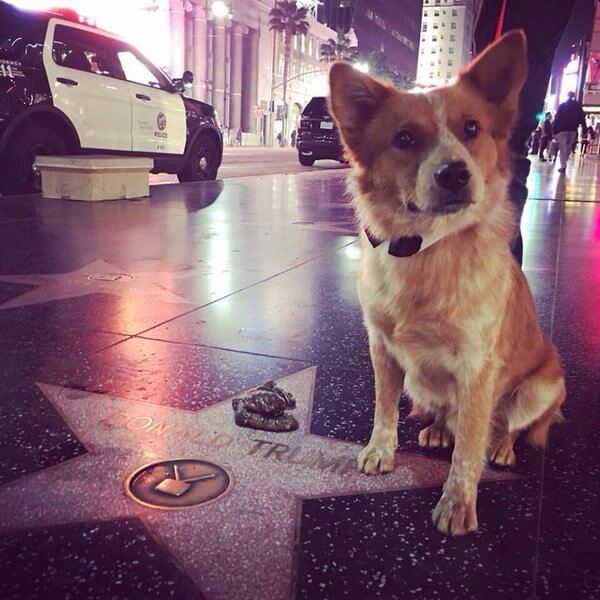 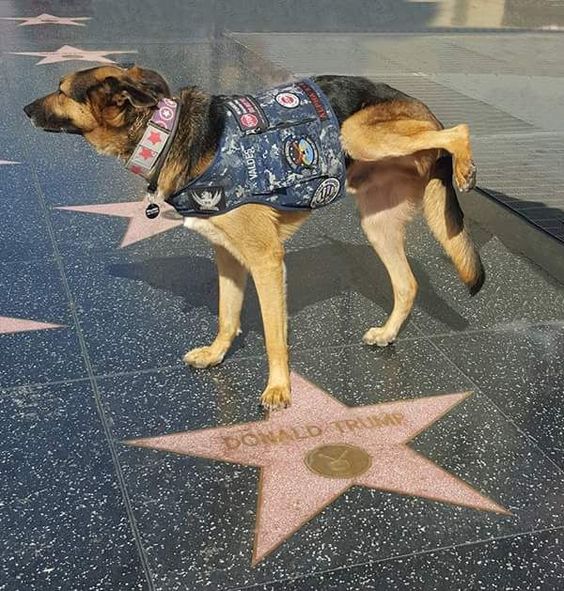 As there has been no shortage of Trump protests these past few years, there is no doubt that we’ll see more of these hilarious pranks befall upon this Hollywood Star over the next few years. Or, hopefully just until he’s impeached sometime over the next few months. Until then, we get to enjoy the artwork of some of the more creative Democrats who take it upon themselves to decorate the Hollywood Walk of Fame.