Most Awkward Moments Between Trump And Kim Jong Un

Donald Trump and Kim Jong Un’s summit might be over, but we now have the pleasure of laughing over their most awkward moments from the meeting for as long as we see fit. And there sure isn’t a shortage of moments to chuckle over. The two dictators seemed to get along for the most part, with Jong Un somewhat following Trump around like a bored child in a museum, clearly laughing at Trump’s expense. Strangely enough, Trump seemed more comfortable in his meeting with Jong Un than he does in most. Perhaps due to the fact that they’re both so similar in nature. Like kindred spirits. Here are some of the most awkward moments between Donald Trump and Kim Jong Un.

President Trump played quite a dramatic video before his press conference ???? pic.twitter.com/pKMD72izJ8

For some strange reason, Trump decided to make a video to show Jong Un and eight members of the North Korean delegation upon their arrival. A video edited in the style of some kind of ’80s movie trailer that made the two of them out to be some superheroes destined to bring peace to the world. It even included that cheesy voiceover guy who hasn’t had steady work since the ’90s and digital effects you might have learned in high school. Then, in true Trump fashion, the president played the video for the media as well. Apparently, he was proud of his little project. 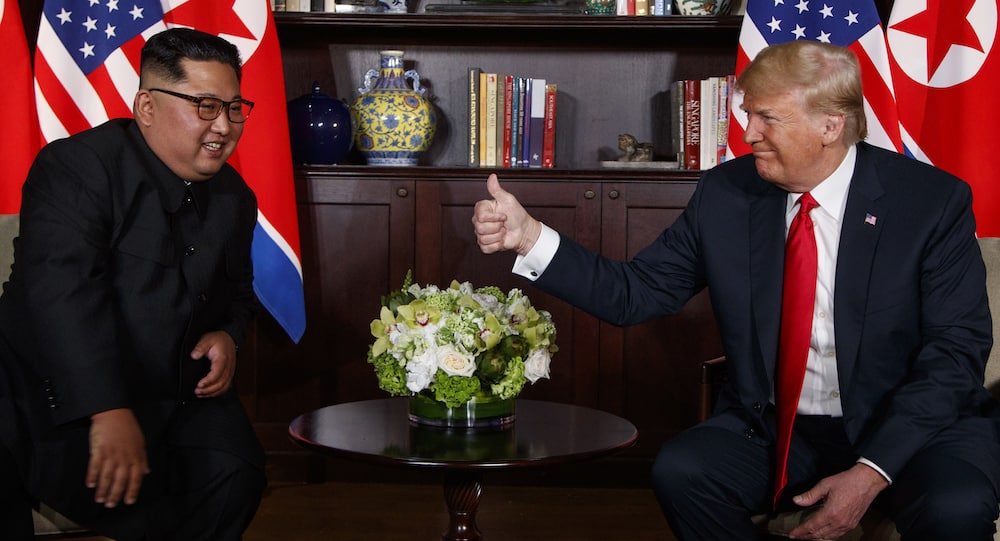 Like Miley Cyrus with her tongue, Trump needs to put his thumb away. He’s holding it up to the most unstable dictator in the world as if Jong Un was a child who’d just completed his first poop on the big boy potty. Not to mention the fact that hand gestures like that mean different things in other countries. For all we know, Jong Un could be thinking that this orange American is flipping him off and is now plotting the ultimate revenge for his embarrassment. Clearly, Jong Un is unsure what this means since he’s staring at Trump’s thumb like he’s expecting to see a bugger on the end of it. What the hell was Trump thinking?!

It may have been a joke, but it was a pretty bad one at best. Trump said to photographers (without thinking first), “Getting a good picture everybody? So we look nice and handsome and thin, and perfect.” Notice how he hesitated before adding that last part, likely realizing that his comment might be taken the wrong way by Jong Un who Trump had indirectly called “short and fat” on Twitter. By looking at Jong Un’s face, you can tell that he too is contemplating whether or not this American idiot is trying to make a fool of him. It almost seems like he’s debating whether or not he should kill the man for what he said while the translator is speaking. Most of us probably wish he had. Fortunately, or unfortunately, depending on how you view it, Jong Un laughs it off and the awkward moment passes. 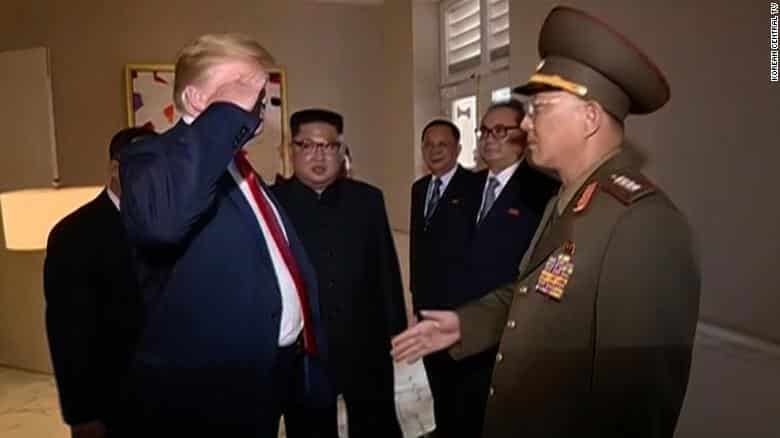 Just days after Trump and Jung Un met, a short documentary was aired in North Korea displaying footage from the visit. It’s in this footage that we see Trump shaking hands as he’s introduced to numerous North Korean officials, and ends up saluting one of their generals. Some are saying that this gesture was anti-American and pretty foolish, but others are concerned that it’s being aired over there at all. As we all know, North Korea’s media is highly controlled by the government, so many are speculating that this documentary is some sort of a propaganda campaign that is designed to earn Jong Un extra points with his people. Perhaps North Koreans won’t feel they’re being controlled or oppressed if the American president seems to be getting along with their leader.

It’s hard to say whether or not Kim Jong Un made this comment before or after seeing that epically horrendous movie trailer starring both himself and Trump as world-renowned superheroes, but it doesn’t make it less hilarious either way. Jong Un, whose words are translated to the man in the doorway we can assume is Trump, says “There are many people who will think of this as a scene from a fantasy, from a science fiction movie.” Well, yea, that’s what happens when you’re constantly lying to your people. They eventually start thinking everything you say is a lie. Perhaps Trump could learn a thing or two from Jong Un after all. Anyway, in America, we wouldn’t classify this as science fiction as it falls more in line with the horror genre.

WATCH: President Trump walks with Kim Jong Un to show off his presidential limousine that is nicknamed "The Beast." https://t.co/SjJeNHlVRD pic.twitter.com/f2CJ4ZHR6x

Likely Trump was showing Jong Un his shiny black limo because he can’t imagine that someone from outside of the United States has ever seen such a nice vehicle before in their lifetime, as they’re all “shithole countries” in his mind. The president probably expected Jong Un to fawn over his precious car that he has nicknamed The Beast, but instead, the North Korean dictator showed very little interest and walked away in under five seconds. Trump’s fantasies of the two of them hoping in the back and taking a ride together were quickly crushed when the limousine failed to impress. What did he expect? Why would a guy who owns millions of dollars in luxury vehicles glance twice at a basic limo? Jong Un was certainly laughing to himself during this one! 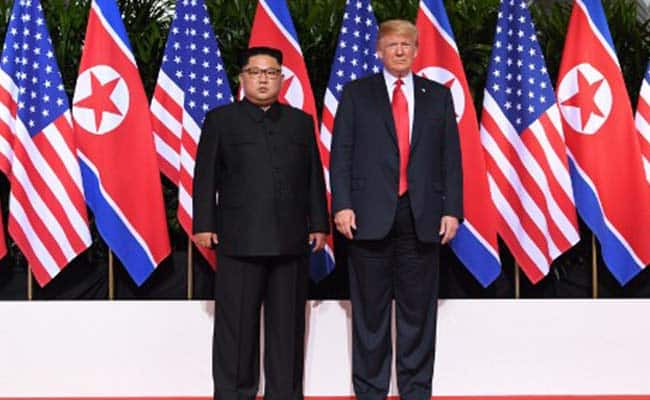 Perhaps the photographers were telling them to stand that way as if they were nailed to a tree. Maybe they told them not to smile because one of them needed a passport renewal. The two almost appear statuesque, like caketoppers at your typical Korean gay wedding. Thankfully they loosened up for more realistic photos after this one. Who the heck was the genius behind this one though? Not a good look for either of these men!

And One Last Awkward Moment…

Dennis Rodman gets emotional talking about the death threats he received after he traveled to North Korea. "I couldn't even go home, but I help my head up high." pic.twitter.com/8CbnHimz95

…with a tearful statement on live television from Dennis Rodman.

Proof That Trump Supporters Need To Go Back To High School