Teenager Tries to See if Her Head Can Fit in...

We’ve all done stupid things when we’re drunk, but some people take it further than most (just ask this squirrel). Take for example, this teenager from Minnesota, who after a few drinks thought it was a good idea to see if her head would fit in an exhaust pipe. In her defense, she wasn’t wrong.

While attending Winstock Music Festival, 19-year-old Kaitlyn Strom decided she just had to know if her noggin was small enough to fit into the exhaust pipe of a stranger’s truck. Although she was successful in her endeavor, she wasn’t as fortunate when it came to getting back out again, and ended up trapped inside for 45 minutes.

Kaitlyn told The Hutchinson Leader: “We were just all having fun and I saw this big exhaust pipe and I was like “hey, my head could probably fit in that. So I tried it. It did fit, but it didn’t want to come back out.”

Kaitlyn was eventually freed by firefighters, who cut her out using an electric saw. 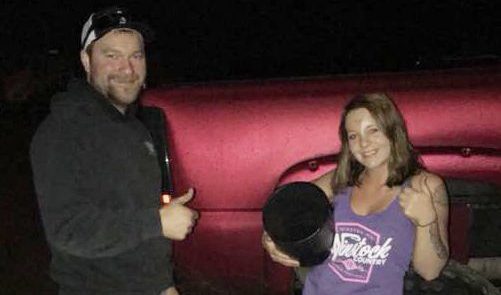 After her was release, she was quickly cited by the McLeod County Sheriff’s Department for underage drinking, but at least she apologised to the owner of the vehicle.

“I remember getting my head unstuck, and I just looked at him and apologized, and he said “no, I’m just glad you’re OK. Don’t worry about it,” Kaitlyn said.

Kaitlyn and the pipe have since become celebrities in her hometown, after the teen shared a photo of herself with the sawn off pipe and the truck’s owner on social media.

She accompanied the snap with the caption: “Yeah I’m the tail pipe girl, whatchu know about it? #winstock2k18kickedmyass.”

The pipe is now on display in local Minnesota pub The Darwin Tavern.

Drunk Man in Trouble for Pretending to Be Ghost in Cemetery