In a narrow ruling earlier this month, the Supreme Court decided in favor of a bakery owner who did not wish to bake wedding cakes for same sex couples. Deftly, we learned who among us didn’t know what the term “narrow” means in reference to Supreme Court rulings.

Though a vote of 7-2 determined the outcome, the decision itself, which can set precedent, was very narrow in scope — even, specific to this individual case. Bakers should not assume they can discriminate against same sex couples in the future based on this case alone, as it likely would not apply should they find themselves in court as well.

However, that didn’t stop a Tennessee storeowner from restoring a “No Gays Allowed” sign to his shopfront, in response to the recent ruling.

“Christianity is under attack. This is a great win,” Jeff Amyx told his local NBC affiliate, “don’t get me wrong, but this is not the end, this is just the beginning.”

How Amyx determines who among his patrons sits comfortably on the homosexual side of the Kinsey scale is unclear.

In fact, unbeknownst to Amyx interviewing with NBC, a gay couple walked into the store without noticing the “No Gays Allowed” sign. They had been distracted by the news crews, uncertain of why they were at the local hardware store in the first place.

“We came here because we’re expanding our patio,” the couple later commented.

I Saw The Sign, And It Opened Up My Eyes

Hoping to add a covered patio to their yard, Geoff and Rudy have been frequenting Amyx Hardware & Roofing Supplies for several weeks prior to the court decision. On this day, they’re wanting to pick up some wire mesh. 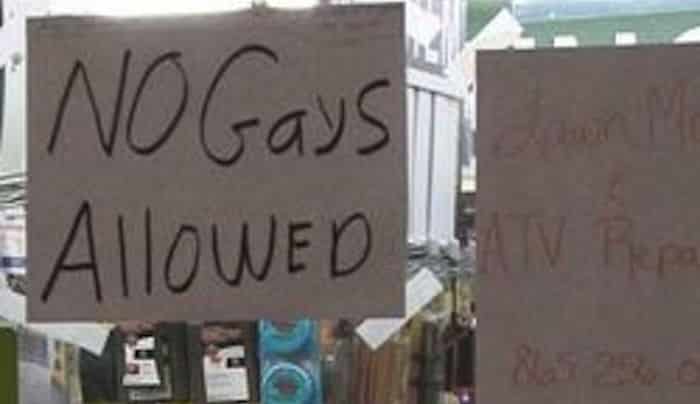 While Amyx is busy with the news crew outside, Geoff and Rudy browse the store’s wares aimlessly, preferring to wait for his assistance. They’ve gotten to know him rather well over the last few weeks, and find his candor amusing.

However, the couple knows the dangers of wandering eyes, and try not to look at too many things in the store that might spark inspiration for a new project. There’s already too many abandoned half-completed DIYs lying around the house at the moment.

When Amyx finally reenters the store, he’s looking particularly proud of himself.

“What was all that about?” says Geoff.

“News wanted to talk to me about the sign outside.”

The couple glance toward the window, but are unable to see the “No Gays Allowed” sign in question from where they stand. They assume he means a “Help Wanted” sign. They both quietly decide the news must be drumming up yet another one of those “Meet the Trump Supporters In Rural America Who The Country’s Forgotten” pieces.

“I told them that Christianity’s under attack,” Amyx says. “But that we’re seeing a ray of sunshine. It’s my right to put up that sign, if that’s what I believe in.”

Geoff and Rudy, who are also Christian, agree with the sentiment that “Christianity’s under attack” enough that they don’t pay much attention to rest of the statement.

“Hard to believe how much grief we get for being Christians these days,” agrees Rudy.

“And I don’t care what anyone says, people do say ‘Merry Christmas’ much less nowadays,” adds Geoff.

“I Serve Everybody! Except…”

Meanwhile, the cake maker (Jack Phillips) at the center of the newly swirling controversy posits that he doesn’t discriminate against anybody.

In defense of his stance that led him to a lawsuit by an LGBTQ couple whom he refused service to, Phillips said, “I serve everybody. It’s just that I don’t create cakes for every occasion.” 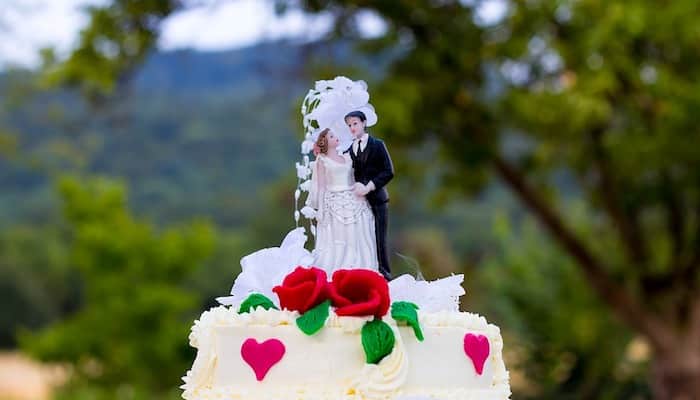 Phillips went on to explain that he offered to make other desserts for the couple for their wedding — but refused to make a wedding cake in particular, owing to his religious beliefs.

“A wedding is an inherently religious event, and the cake is definitely a specific message,” Phillips said.

Biblical scholars are still searching for reference in the Holy Book to the wedding cakes enjoyed exclusively by Jesus Christ and his disciples.

Of course, weddings are traditional to cultures all across the world, including non-Christian countries. Additionally, atheists participate in non-religious wedding ceremonies every single day, most of the time with three tier buttercream wedding cake, as they fully accept the existence of cakes as scientific fact.

Furthermore, the cake maker hoped to demonstrate his lack of bigotry by pointing out he similarly refuses to make cakes for Halloween.

Every year on October 31st, thousands and thousands of witches and vampires come together to eat cake, as long as they don’t go to Phillips’ bakery. A lawsuit against Phillips is currently pending in the Supreme Court of Halloween Monsters.

And They Lived Happily Ever After (Maybe After 2020)

Back at Amyx Hardware, Geoff, Rudy, and Amyx are sharing a hearty laugh over some wire mesh.

“When you hold that wire mesh up in front of you like that, you look like Crooked Hillary!” says Amyx.

Geoff and Rudy, who were Bernie supporters that allowed social media propaganda to radicalize them against Hillary in the weeks prior to the election, roar with laughter.

“Is that all I can get for you guys today?” says Amyx, as the three head back to the cash register.

“Yup, that’s it for today. We’re taking it easy. Mom’s coming over for some dinner, so we won’t have much time to work on the new porch.”

When all’s said and done, the loving couple of ten years leaves the store with their new wire mesh. They don’t notice the sign on the way out. 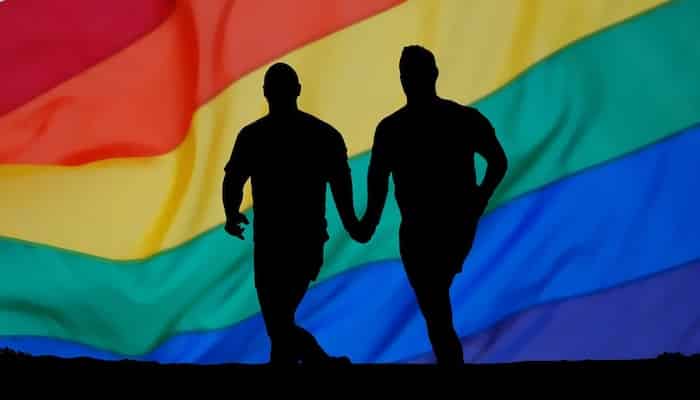 Despite a large litany of contextual clues, it never occurs to Amyx that they are a couple. Despite the nonzero amount of effort it took to put up a “No Gays Allowed” sign on his storefront, he routinely forgets that LGBTQ people even exist.

He sighs to himself with a flutter of contentment. He enjoys it so much every time those two adult brothers who live together come into his store, as they remind him so much of himself and his own brother — whom he loved, dearly, until he got cancer while not on a health insurance plan, and died a year later.

Glancing at the backside of his sign, he vigilantly surveys his store for gay people, as a child might timidly peer under the bed for monsters.

The House Chaplain Needs To Pray Better, According To Paul Ryan