Combat Reloaded: The Comprehensive Fun of a Classic FPS on...

Most first-person shooters, especially those on the web, are geared towards seasoned FPS pros. Those that spend hour upon hour honing their shooting skills and climbing through the ranks to be named best of the best in whatever game they play. This leaves little hope for the noobs of the game world.

Fortunately, Combat Reloaded is a comprehensive first-person shooter game that welcomes everyone. Every level of gamer can get in on the fun and fast-paced action. No one is left out. Plus, there’s no bigtime set-up. Nothing to download or take up data and memory on your PC. You jump right into the games—which is more than you can usually say for PC FPS games like Counter Strike, Halo, or Quake III Team Arena.

Have you ever wanted to battle it out with tribal enemies at the site of Machu Picchu? Or, would you like to explore the brutal possibilities of carnage in Bikini Bottom (think Spongebob Squarepants, Patrick Starr, and Mr. Krabs)? Or, better yet—is Lego Square or Minecraft more your speed in all their cubic landscapes? These maps, and lots of others, are accessible from the get-go. Nothing to unlock.

There are dozens of unique maps too. Ones that are more appropriate for a classic first-person shooter game, like the Infiltrator Map. These are a bit more rustic and mechanic, complete with drippy pipes, tons of places to hide, and perhaps a monster or two. It’s not out of place to see a zombie or some weird creeper lumbering in your direction. 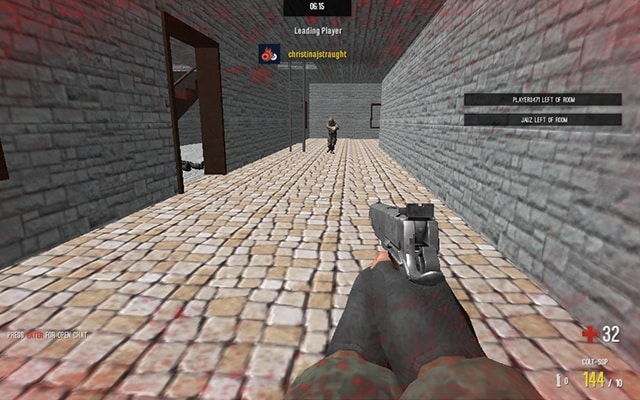 One of the perks of Combat Reloaded gameplay is team plays. You can jump into a pre-made game on a pre-decided map as soon as the game server loads. Or, you can create your own game on the map of your choice. Have a few friends that want to play too? Set up a password that only you and your friends know, then play together in your custom-created game.

There are also 6 game modes in Combat Reloaded, but the most popular are Zombie, TDM, and Gun Game. In Zombie, you and your team are pitted against ravenous, reanimated corpses. TDM stands for Team Deathmatch and it’s the classic that is a go-to for those that are new to the game. Whereas, the Gun Game consists of strictly guns—no melee weapons, grenades, or otherwise inferior weapons.

In a nutshell, there are well-over two dozen maps to take control of. Each with a unique design and well-crafted appeal that makes it twice as fun to shoot it out with your adversaries and rise to the top of awesome Combat Reloaded game ranks. 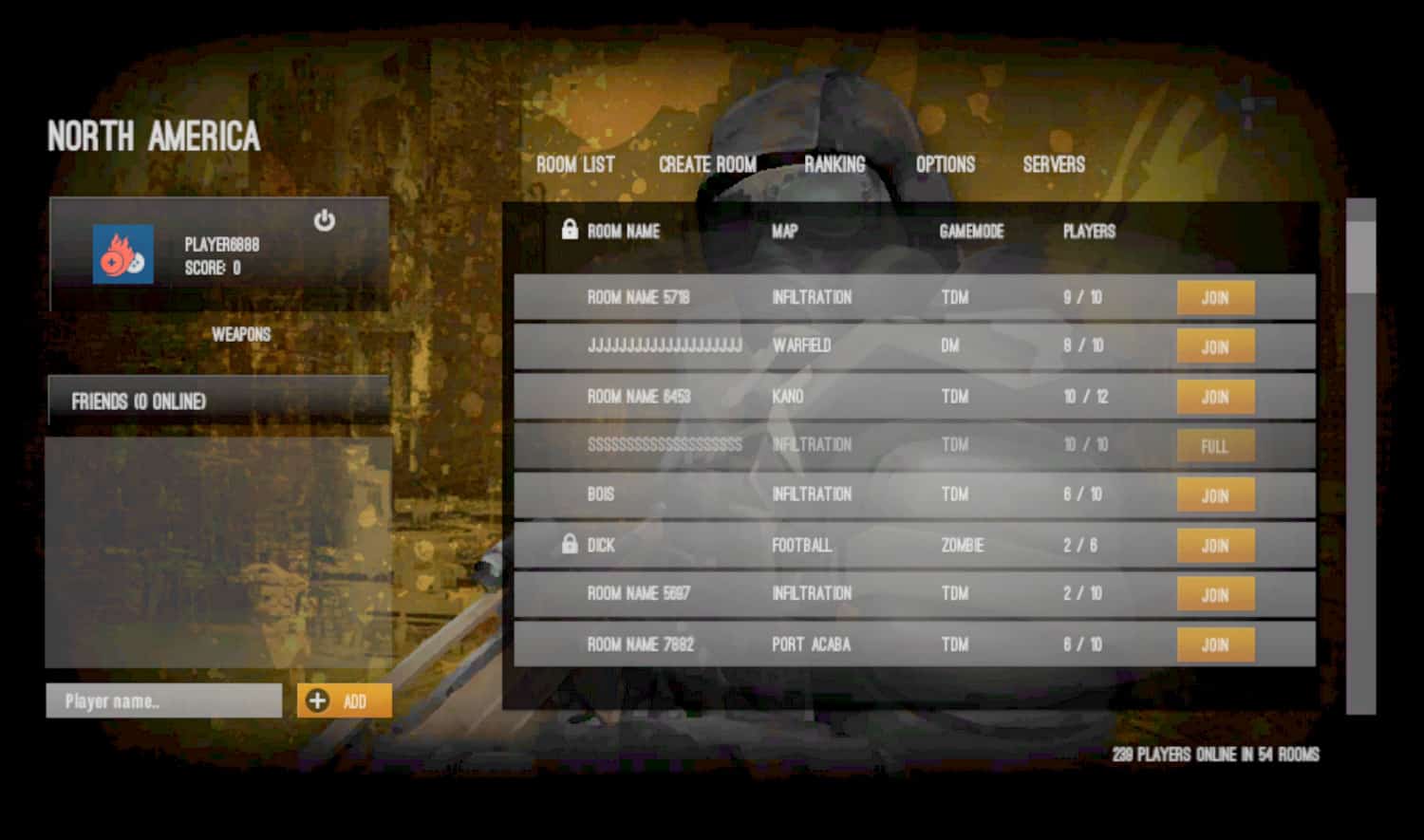 Weapons-wise, Combat Reloaded boasts a bunch of classics, like:

Classic grenades: Pull the tabs, throw them at your enemies, and watch your adversaries explode. You might even find a smoke bomb or two—perfect for waiting out your competition before picking them off when they run to avoid the choke.

Sub-machine guns: These guns are high-powered but the reload speeds differ from one gun to the next. AK-47 is the preferred, most popular gun because the reloads are fast, the firepower is rapid, and accuracy is high (especially if you have amazing aim).

Melee weapons: Baseball bats, hand-to-hand combats, the occasional brass knuckles, and lots of knives. There are several methods for deathmatch brutalities at close ranges. And most of them are both effective and fast.

Side Note for the Melee weapons: If you want to try your hands (literally) at Combat Reloaded melee attacks, make sure your opponent is ill-equipped. Sub-machine guns will rip right into your character, but a slower weapon, like a pistol, will injure you but still gives you a chance to win. 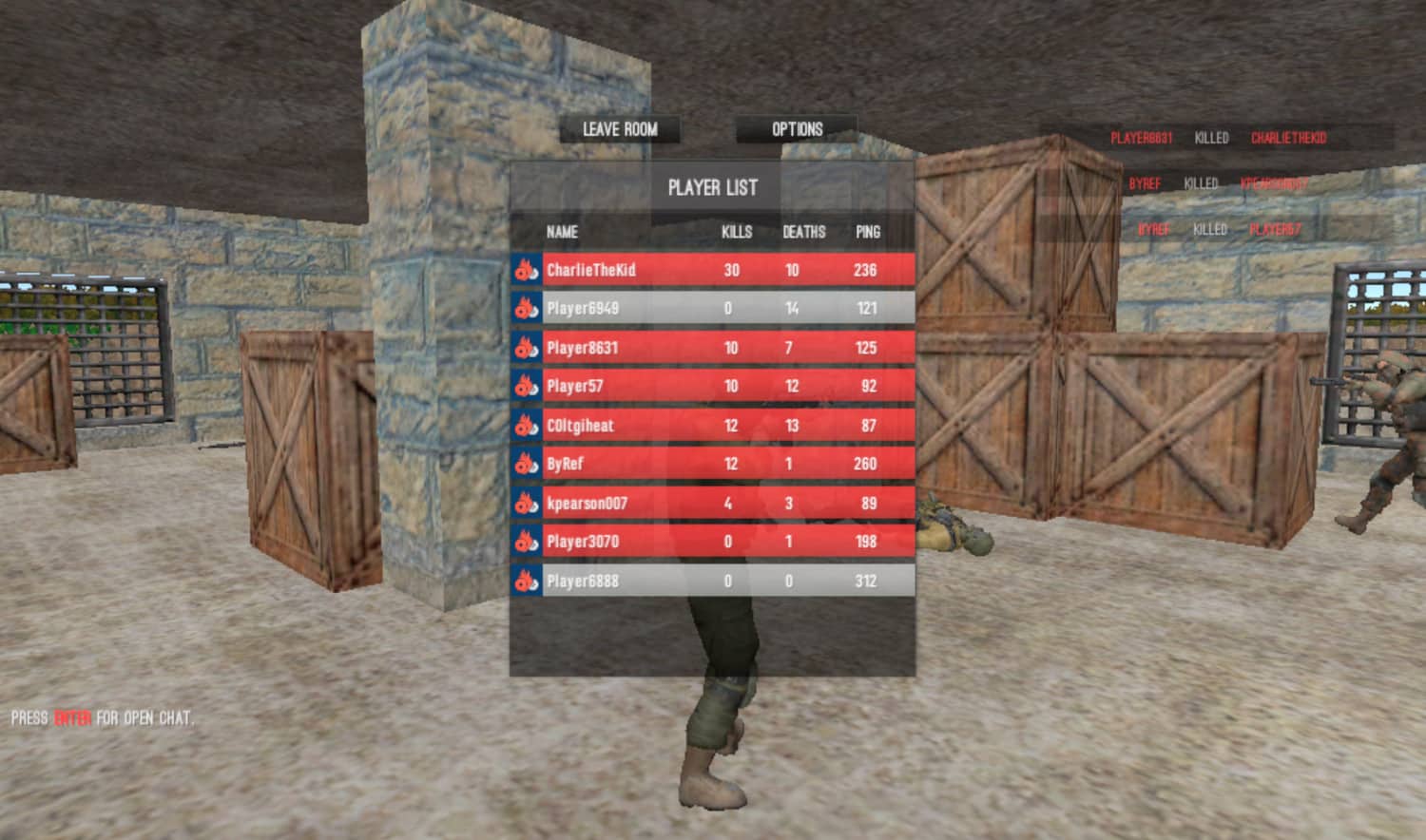 The controls for Combat Reloaded are SUPER simple and classic. You need your keyboard and mouse—nothing else. WASD is your movement configurations—W moves your character forwards, S moves backwards, A moves left, and D moves right. C is good for crouches to hide or creep, while the Spacebar is (of course) for jumps. Pick up guns, grenades, ammunition, and other weapons with F.

As for the mouse controls, the Right Mouse Button is for zooms, while the Left Mouse Button shoots or fires a grenade. Interested in hand-to-hand combats or knife attacks? Press V for quick melee attacks and avoid return attacks with left (Q button) or right (E button) leans.

If you’ve ever played a popular multi-person shooting game of any kind on the web, you know that sometimes the servers can become packed. This results in varying levels of sucky server lags. However, to combat server lags, Combat Reloaded is split into four separate servers by regions: North America, Europe, South America, and Asia. You can pick the servers closest to you for the best results. Or, you can try something new with a less loaded server.

The United States is the biggest North America server; ergo, if you live here during peak hours, like when kids get out of school or after classic dinner times, the servers are likely to be loaded. But if you choose somewhere else during their non-peak hours, you can avoid some of the lags with fewer gamers on in that region at once.