It’s been 72 years since Donald Trump was conceived in a room you can sleep in yourself through Airbnb. Not wanting the President who threatens to end trade with all allies to feel unloved, the GOP invites all Americans to sign his birthday card. With the freedom to type literally anything into the card, those frustrated with the antics of the current administration were not keen to let the opportunity slip by.

Especially when popular tweeter Chrissy Tiegen called them to action.

“Hey guys, let’s put the jokes aside and all come together to send president trump some birthday messages on this official card where you can write anything u want, all your thoughts and feelings absolutely anything anything for this special day,” she wrote, being sure to add, “Just know this is his official birthday card so make sure it’s from the heart! Happy Birthday, champ.”

Predictably, not all the messages were as sincere as the ones you write to your Grandma.

The concerned Ali wrote simply, “Please resign before they impeach you. It’ll be less embarrassing.” In addition to platitudes like “Hope you have an amazing day with loved ones,” birthday cards are great avenues for offering advice. After all, haven’t we all received birthday cards that say things like “Happy Birthday! Wishing you a blessed day, and did you know that if you wash your dishes right away they’re a lot easier to clean?” 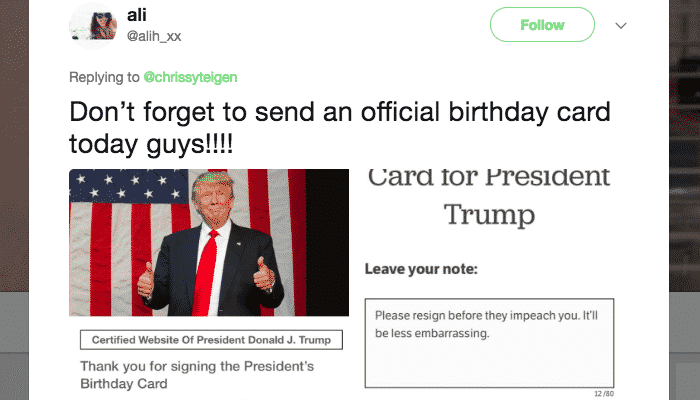 And Ali’s not wrong — Trump would not be the first person to resign from office. However, he would be the President to be removed via impeachment. And for an egomaniac, that would certainly be mortifying. And there’s the added benefit that without the presidency’s spotlight, both media and law enforcement will likely lose substantial interest in the crimes surrounding him. Can’t lose!

Dan was slightly less charitable in his card’s message, favoring harsh reality. Still, confronting our deepest flaws is part of personal growth, so Dan’s pointed words aren’t without their small degree of mercy. 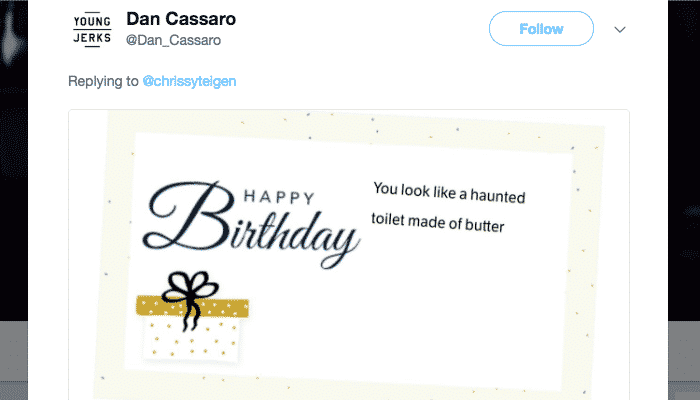 The truth is that, yes, Donald Trump does look almost exactly like a haunted toilet made of butter. That’s undeniable. So what can he do about it? Well, there’s a lot. How about a new haircut? Or a different brand of spray tan? How about exercising — since his belief in the human’s finite amount of battery energy is as void of scientific fact as his views on climate change?

But perhaps the comparison is needlessly cruel, summoning painful memories of the used golden toilet the Guggenheim museum offered to send Trump after a failed request for a Van Gogh painting?

There’s nothing more heartwarming than a personal, handmade gift. Ryan understood that, and that’s why he decided to celebrate Trump’s birthday by presenting him with a poem he wrote himself. 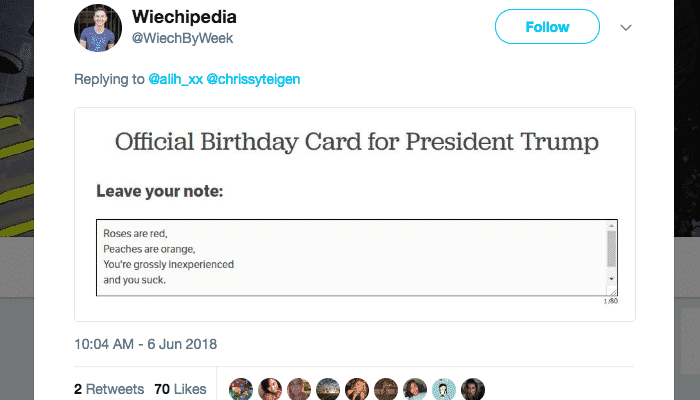 There’s certainly room for improvement as far as rhyme scheme is concerned, but it’s not Ryan’s fault that nothing rhymes with ‘orange.’

Hoping to humble the Commander in Chief Ryan emphasized Trump’s lack of political, diplomatic, and military experience in his card, perhaps hoping doing so would humble the man in the Oval Office.

Sometimes, the best thing to write in a birthday card is a movie quote that perfectly sums up your relationship with humor and poignancy. That could have been what Gigi was going for when she quoted a popular ‘Mean Girls’ quote. 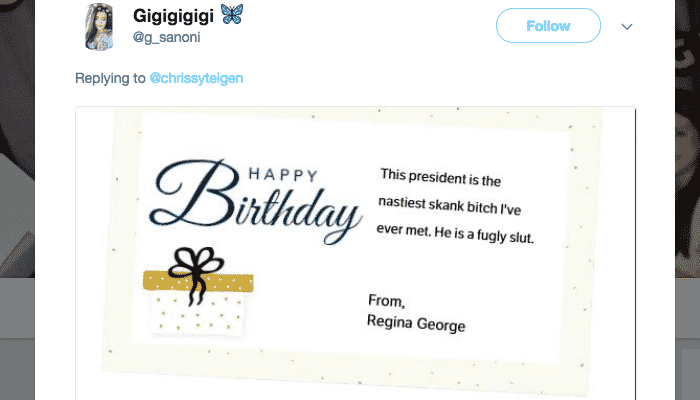 It’s like when you write in a card “Happy Birthday! My heart wants to sing!” in reference to the film ‘Sound of Music.’ Sometimes a fun quote can add a special flavor to your card’s message.

So when Gigi writes that this president is the”nastiest skank ass bitch I’ve ever met” and “a fugly slut,” it’s hard to tell if she really means to direct those words at him, or if she’s simply sharing a funny quote from Tina Fey’s popular 2004 film.

Did You Forget About These Things?

On the other hand, Jesse put niceties aside and took a tough love approach, pointing out many of the President’s failures, including his response to Puerto Rico, his inability to enact legislation on DACA, his numerous failed attempts at taking healthcare away from millions of Americans, and that time he called the Charlottesville Nazis “very fine people.” 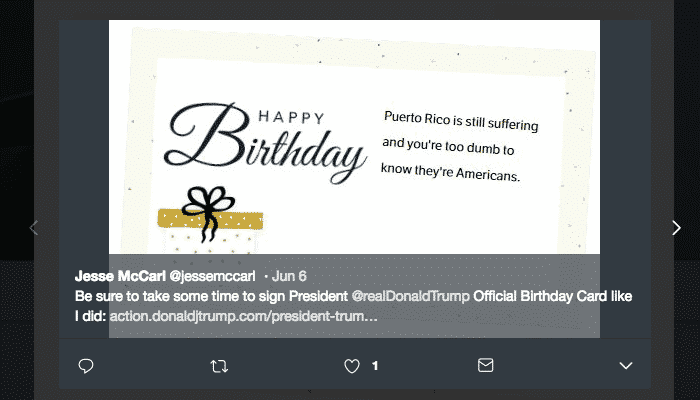 And when she puts it that way, it becomes hard to remember why we would even want to sign a birthday card for this man in the first place. He’s not that great, is it?

Even more, it becomes clear once you submit your card that it’s nothing more than a fundraising scheme to both solicit money and your contact information. When signing, you’re prompted to provide your phone number, email address, and zip code.

In the fine print, it says that you consent “to receive calls and SMS/MMS messages, including autodialed and automated calls and texts, to that number from each of the participating committees in the Trump Make America Great Again Committee, Donald J. Trump for President Inc. and the Republican National Committee. Msg & data rates may apply.”

And once your submit your card, it takes you to a page requesting a gift in the form of a monetary donation to the commemorate the President’s birthday, with a default set to $100.

Geez, isn’t he the billionaire? What happened to “it’s the thought that counts”?

Ms. Manners Would Want You To

Regardless of your personal feelings for the President, sending a personalized birthday card is always the polite thing to do. After all, do you ignore your racist Aunt’s birthday, or do you send her a short, nondescript card in the name of good manners? Do you pretend your homophobic relatives don’t exist, or do you send them birthday cards each year like the civilized individual you are?

Or maybe you don’t, and that’s fine too.

Whatever the case, signing the card might be the charitable thing to do. Who knows many he will get, given the tensions he’s created US allies? And if you do sign it, you should probably use a fake phone number, email, and zip. He’s a fake president, anyway.