The Democrats Are Trying to Keep Illegal Immigrants in the...

Over the course of May and early June, Donald Trump has gone to great lengths to make the public aware of a tremendous threat to our southern border: MS-13. Our revered president crusades to wake everyone to the fact that an army of non-Americans continually pours across the border to wreak immigrant-havoc on good, God-fearing Republicans.

Even worse, the Democrats want to make it easier for the members of MS-13 and their criminal cohorts to pass back-and-forth from country to country.

The President and His ‘Animals’

In mid-May, Donald Trump was attacked by the liberal media when he said of unauthorized immigrants, “You wouldn’t believe how bad these people are. These aren’t people, these are animals, and we’re taking them out of the country at a level and at a rate that’s never happened before.”

When asked to clarify what he meant, Trump explained that he was referring to gangs like MS-13 who are a scourge on American communities.

“MS-13, these are animals coming onto our country,” Trump told reporters. “When the MS-13 comes in, when the other gang members come into our country, I refer to them as animals. And guess what? I always will.”

The Gangland Arm of the Sinaloa Cartel

Sure, it sounds like old Trumpy has stepped in it again when he dehumanizes MS-13 members, but in all honesty, the president isn’t likely to get a lot of static. For those who aren’t familiar with MS-13, they’re best known for being real dickheads. Drug-dealing, murdering, human trafficking dickheads with a penchant for excessive brutality and merciless retribution. Also, some of them are huge fans of Satan; and not the hedonistic academic way Americans like Satan, but real Old Testament, human sacrifice stuff.

You know what … re-reading the above, I’ve decided to reverse my opinion on MS-13. They seem like good dudes. They’re enterprising fellas who probably never even stabbed that one guy 100 times before decapitating him … Also, I, for one, think the face tattoo is an underrated fashion choice. 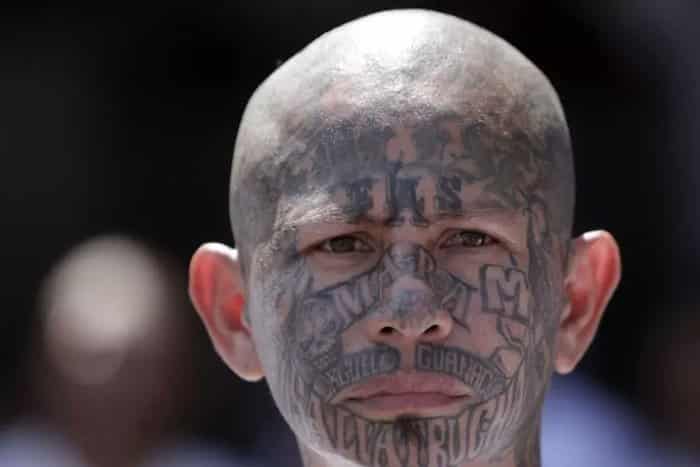 It’s not me, but all those other people who claim that MS-13 is a threat not only to the United States but Central and South America, as well. MS-13 began in Los Angeles as a group of El Salvadorian immigrants, but they’ve grown extremely powerful and numerous in the interim by abiding by their horror movie motto, “kill, rape, and control.”

They’re such a fearsome group that the Sinaloa cartel enlisted MS-13 to fight on the front lines of its drug war with a rival cartel. Like I said, I, personally, wish them well in their reign of terror.

Anyway, an editor made me write this.

Fighting Back Against the Horde

In recent years, MS-13 activity has become a problem in and around Suffolk County, New York. Since 2016, at least 15 bodies have been connected to the gang. Some people, like criminal justice professor David Kennedy, believe the Trump administration’s policy of isolating immigrants (and deporting them, when possible), allows gangs like MS-13 to thrive.

“[There’s] no question that in the last couple of years, we’re seeing reductions in reporting of crime by mainstream immigrant communities,” says Kennedy. “And what that means is that people are afraid to report. And that gives the really dangerous the room they need to operate.”

Of course, this liberal academic (read: sissy) fails to realize that those immigrants likely aren’t reporting the crimes of MS-13 because they’re all members of the gang themselves. And some, I assume, are good people.

Anyway, you don’t need the community on your side when you have pepper spray and a nightstick, which is why God invented the NYPD. The president has been effusive in his praise of New York’s cops and their ability to crack some skulls.

He told an assembled group of police officers, “Recently, MS-13 gang members called for the assassination of New York City police officers so the gang could quote, ‘take back the streets.’ They got it wrong. We are the ones who are taking back the streets. We are getting them out of our country by the thousands. Every week we’re setting new records.”

And, sure, Trump-hating fact-toters like Politifact called that statement — that we’re “getting them out of our country by the thousands” — Mostly False, but what would they know about anything. All they have is books and in-depth interviews with apolitical experts.

No, the truth is that Trump (https://socialnewsdaily.com/69544/dogs-who-cant-stand-donald-trump/) is single-handedly ridding America’s streets of vile MS-13 gang members while Democrats work to protect these offenders.

No One Wants Your Help, Nancy Pelosi (for Serious)

If you list MS-13’s crimes in a row and then point to the fact that several incarcerated members have shown zero remorse for some pretty awful acts of terror, it’s almost easy to defend Trump’s comments. At the very least it’s probably best to avoid this one racial slur (especially when Trump will probably give us all another doozy to attack any day now).

Try and tell that to House Minority Leader and permanent buzzkill Nancy Pelosi, who dared to insist that even MS-13’s members were still human. At a news conference in the midst of the hubbub, Pelosi asked of Trump, “Does he not believe in the spark of divinity, the dignity and worth of every person?”

Of course, expressing sympathy for cold-hearted killers just prompted Pelosi’s detractors to wonder if she’d argue Adolf Hitler’s humanity so passionately, too. A side-note for Ms. Pelosi from someone who’s participated in more than a few internet message board conversations: You’re never going to come back to win an argument in which your opponent feels comfortable enough to accuse you of being cool with Hitler.

You’ve already lost and/or they’re too dim-witted to convince.

Thanks to Pelosi’s bull-headed approach to the MS-13 ‘Animals’ comment, Trump has enough juice to keep inflating the issue. A single Democrat was foolish enough to take the bait and claim that MS-13 were people. So, naturally, all Democrats everywhere are in league with MS-13 working to destabilize America. It’s an easy leap to make.

“The Democrats are sticking up for MS-13,” Trump told his besties on Fox & Friends a few days after Pelosi’s comments, adding that the Democrats were obviously concocting reasons to keep MS-13 officials in the country. That’s why they champion unfettered immigration, and that’s why they stick up for gang members who are terrorizing the United States.

Though the shock value has worn off in the eighteen-plus-months that Trump has been in office, the showman’s ability to turn a random racist comment into a full-blown Democrat conspiracy is nothing short of impressive.

If only it weren’t the real world Trump was screwing with.