If You Weren’t Laughing At Roseanne’s Ambien Twit-Slip Before, These...

Roseanne Barr is still asking for forgiveness after her racist tweet left a few hundred people suddenly without jobs, but ABC is having any of it. There are talks of a spinoff, but since Barr owns the rights to the show, she would actually benefit from this. It has gotten to the point where it’s kind of sad. I don’t know who to feel worse for, the actors who are out of a job, the crew members, the writers, or Barr herself as she’s clearly oblivious to why her tweet was wrong. Throughout the madness, political cartoonists are having a field day with this unfortunate situation, turning something that sucks for so many people into hilarious pieces of art. Here are the best political cartoons that depict Roseanne’s downfall guaranteed to make you laugh. 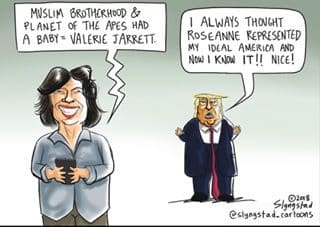 While Roseanne’s tweet was certainly made in bad taste, it does seem to fall in line with Trump’s Make America White Again campaign. She may have committed career suicide in the entertainment industry, but it might have opened some doors for her in politics. We all know Trump goes through advisors like he goes through McDonald’s burgers, so there’s still hope for Roseanne to get back in the spotlight. Perhaps Trump will even have her on his newest reality show project, The Apprentice: White House Edition.

If A Dunce And A Racist Had A Baby 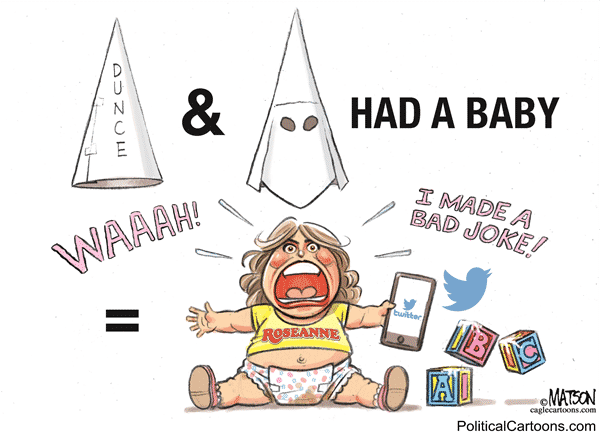 Roseanne’s Twitter mathematical equation lost her the respect of millions and prematurely ended the careers of people she likely considered close friends. This cartoonist depicts a more accurate equation that hardly needs explaining. Barr’s racist tweet should have come as no surprise as the comedian has been playing with fire in that arena for over a decade. Perhaps if she keeps whining about it, some of the cast will get their jobs back with a spinoff.

When You Take Bigotry Pills 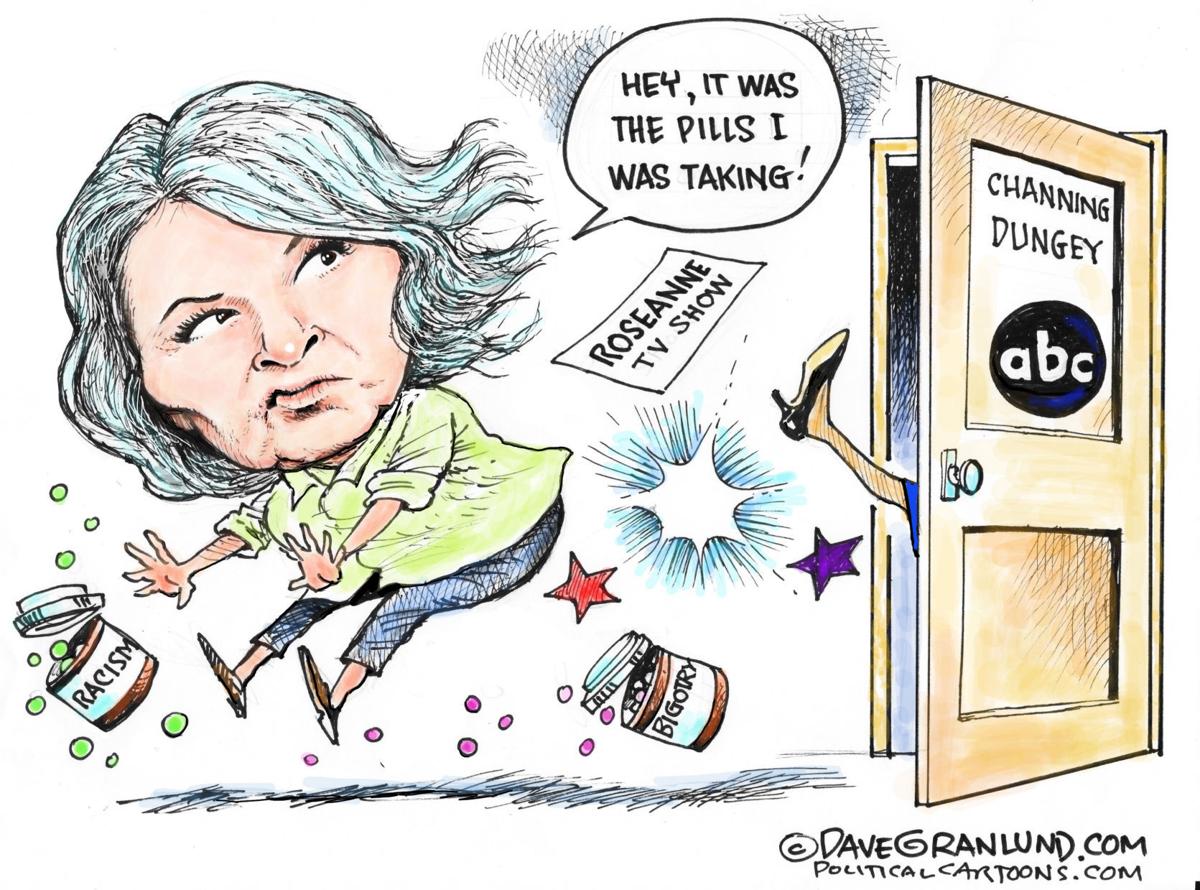 It’s kind of poetic that Channing Dungey, ABC’s first black president, was able to give Roseanne’s show the ax. Her excuse for her tweet, claiming she as on Ambien, was pathetic at best but gave cartoonists something more to work with. Roseanne might be taking drugs that gave her loose lips, but it certainly wasn’t sleeping pills. Besides, racism isn’t caused by medication. Not yet at least. 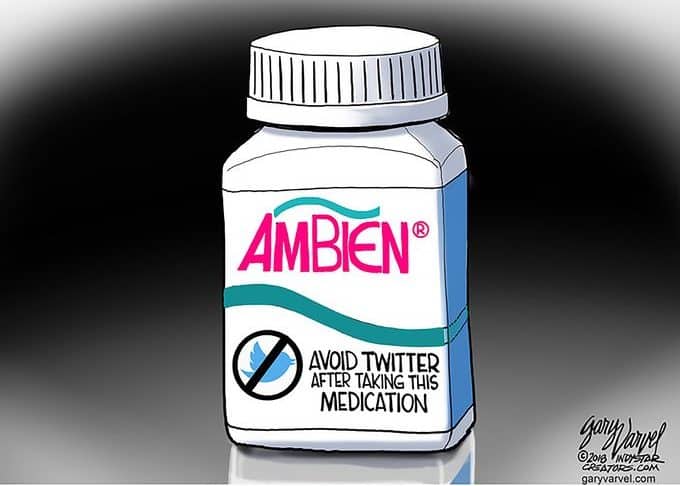 The makers of Ambien may have released a statement that claimed their medication in no way could result in racist tweets, imagine if this whole debacle forced them to put a warning label on all of their pill bottles? Tweeting on this sleeping pill would become the new trend among teens. They’d probably make some kind of game out of it to see how much racist garbage they can spew before passing out. It’s hard to say if that would be better or worse than the Tide Pod challenge. 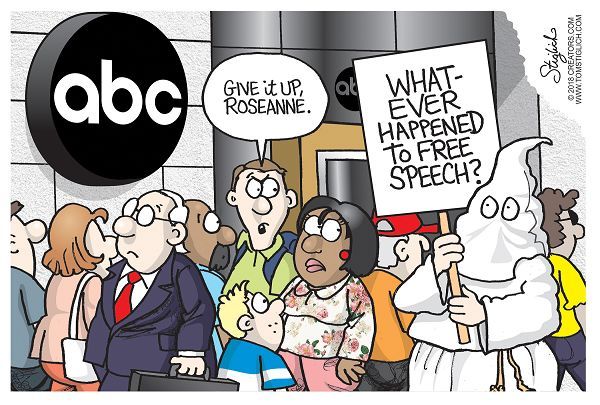 It’s shocking how many people use freedom of speech as an excuse for their racism. The right to say whatever we’d like doesn’t save us from the consequences, which is Roseanne’s case was to lose her job. It’s not like Twitter got rid of her account and took away her right to tweet. She still has a platform to share all of her ridiculous “jokes” on. ABC just won’t be one of them. 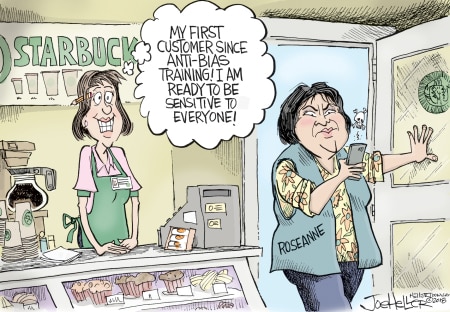 Hopefully, Roseanne doesn’t actually go to Starbucks as those employees deal with enough crap on a daily basis. Their new training likely didn’t inform them on how to handle a known racist white comedian walking in their doors. At least Roseanne seems to only share her opinions from behind a screen these days. Starbucks employees are safe for yet another day.

Roseanne Gets A New Job 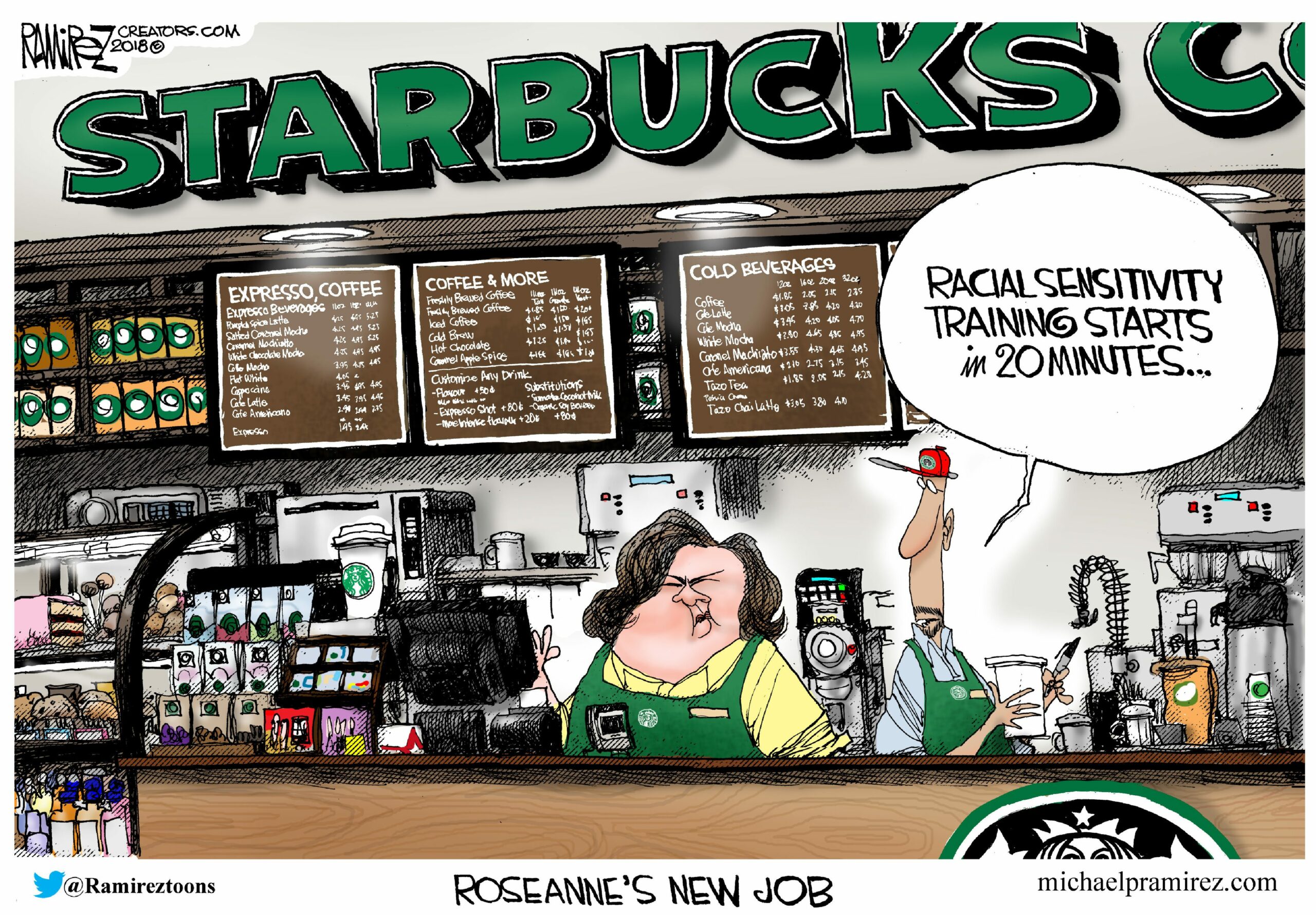 If working in politics doesn’t work out for the comedian, there’s always a job open at Starbucks. Roseanne wouldn’t be able to pass a racial sensitivity course if it was led by Donald Trump, but fortunately, the coffee moguls don’t seem to be requiring testing after the training. Perhaps Barr should be forced to take a similar course, one that takes place over several months. That would be a much more painful punishment than the cancelation of her show.

Roseanne Put To Work In Hell 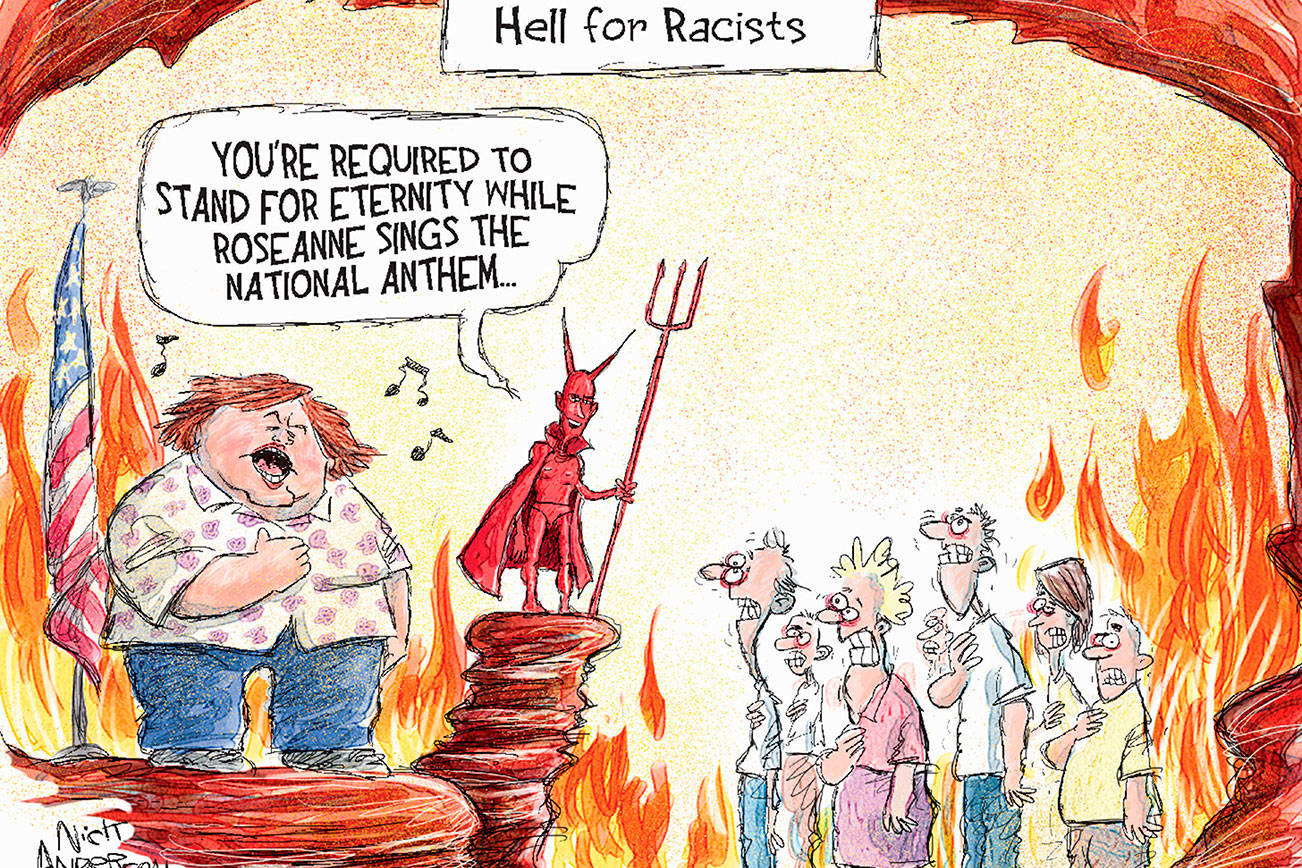 If you’ve never heard Roseanne’s rendition of the National Anthem from a baseball game in the ’90s, consider yourself lucky. Calling it singing would be an insult to the industry, as she screams and screeches her way through the lyrics before spitting on the ground. Why she was asked to sing in the first place is absolutely mind-boggling, and the audience can’t seem to make up their minds as to whether or not they should boo her or applaud her efforts. After listening to it just once, I can agree that this would be a suitable punishment for racists in hell. Donald might not be teaching racial bias training for Starbucks, but he may have led a lecture or two for students working toward their degrees in racism and bigotry at Trump University. Of course, now none of these degrees hold any value, but students likely learned many valuable lessons on how to keep their businesses white during their time at the school. Roseanne may not have attended as a student herself, but her white privilege was referenced in many of the school’s textbooks and curriculum. If anyone knows how to get away with being publically racist and still keep a career going for so many years, it’s her! 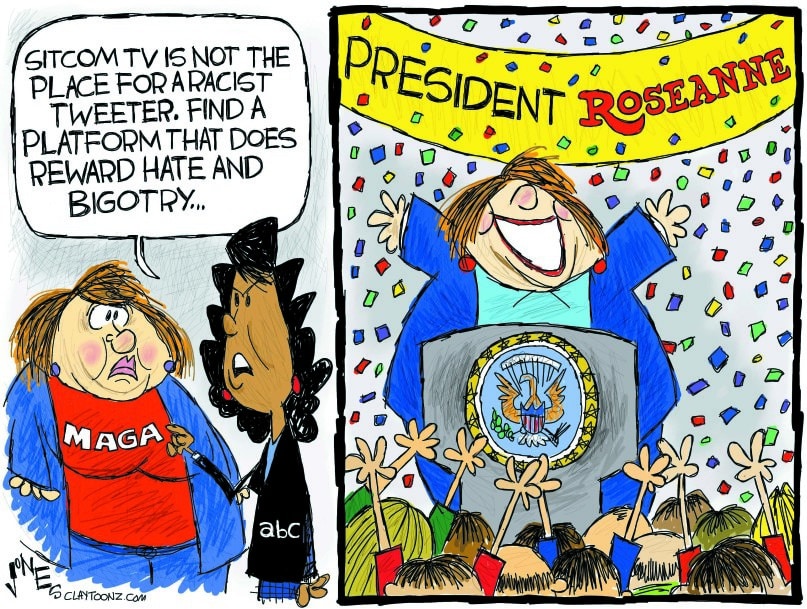 One racist tweet can end your career in entertainment, but it can win you a presidential election for sure. The proof is in the orange pudding who sits in the Oval Office these days. Kanye announced his 2020 campaign, it would only make sense that Barr do the same as it’s the only logical direction for her career at this moment. Either that or she needs to schmooze Trump for one of his advisor’s positions. He tends to give those out to anyone.