The CDC Zombie Preparedness Comic Is Way More Subversive Than...

by Justin Andress 4 years ago3 weeks ago

Written by Maggie Silver all the way back in 2011, the Center for Disease Control’s Zombie Preparedness Comic arrived with a murmur of appreciation from the general public. That may not sound like much, but when it comes to the government’s attempts to relate information to the average person, any reaction from the public booms like thunder in a federal building.

The campaign immediately went “federal viral,” which is like “real viral” but much, much smaller. Still, the government was so pleased that it sent Silver on tour to talk about the message of the comic.

Now, if you watched that minute-twenty and you dismissed Silver as some PR person who happened to stumble upon a decent idea, you’d be forgiven. If you read the comic and saw some blatant attempt to trick people into gathering an emergency preparedness kit, you’d also be forgiven. I mean, it dares to conclude with, “The End?”

But the CDC Zombie Preparedness Comic has an underlying message. Something much more terrifying than the hackneyed zombie tale that propels the comic forward.

The CDC Zombie Preparedness Comic follows Todd, his lady friend, Julie, and their dog Max. One night, after Julie heads to bed, a news report informs Todd of a mysterious virus that’s aggressively contagious and has the unfortunate side effect of turning people into voracious face-eaters.

Thank the good Lord that Todd is on a permanent Xanax drip, because rather than, you know, break out in a cold sweat, lock all the doors, and wake up his wife so they can start rustling up sharp objects, Todd takes a different route. He calmly checks the CDC website for information. The CDC, meanwhile, is so on top of shit that they’ve already identified the virus as “zombie” in the space of time it takes Todd to watch the news and then slide across the floor in his drug-induced haze. They even have a preparedness checklist ready to go. 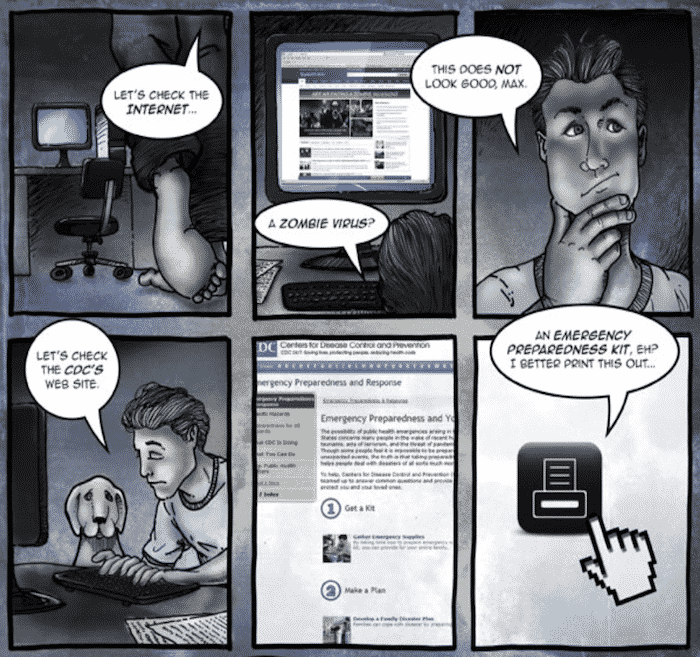 Ever the charitable partner, Todd goes around gathering up supplies (again, without waking up his wife). No reason to bother her as society crumbles. She can learn about it in the morning when Todd is munching on her brains. Because this pill popper wouldn’t survive long without the four-leaf clover that’s apparently grafted to his butt.

Todd must be lucky because, in spite of how vigilant Todd is about staying on top of his CDC prep skills and listening to rando news reports when an actual zombie shows up, he has no clue what’s staring him down. 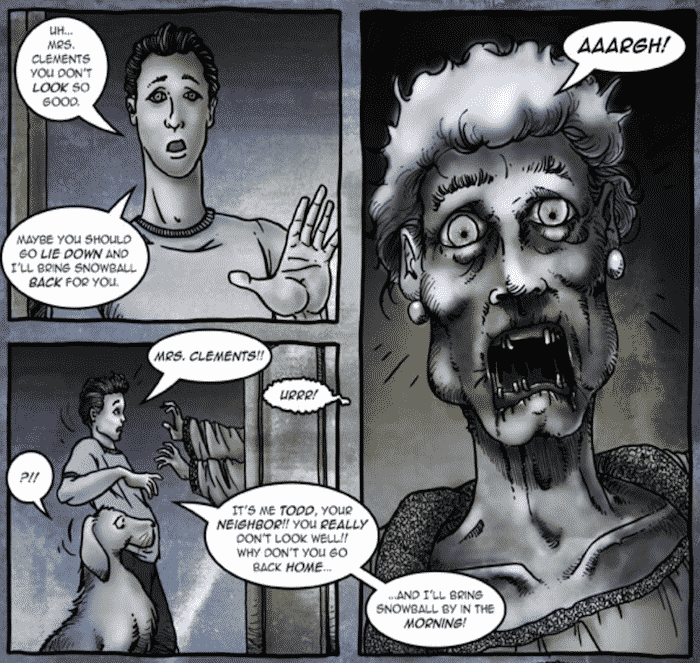 Be Prepared to Put Yourself in Harm’s Way, Because Help Isn’t Coming

Fortunately, old widow Clements is comic history’s most easily distracted zombie because she takes Todd’s suggestion to heart and wanders off back to her house. She’s probably still in her living room waiting for Todd to return Snowball.

Anyway, after a week of waiting, Todd, Julie, and their dog Max are low on supplies and becoming acutely aware that the government isn’t coming to save them. So, they pick up sticks and race through the zombie-filled streets.

For those moments when people in a disaster inevitably find themselves without help, forced to plunge through the chaos just to survive, the CDC Zombie Preparedness Comic offers this helpful tidbit: go fast and take chances. 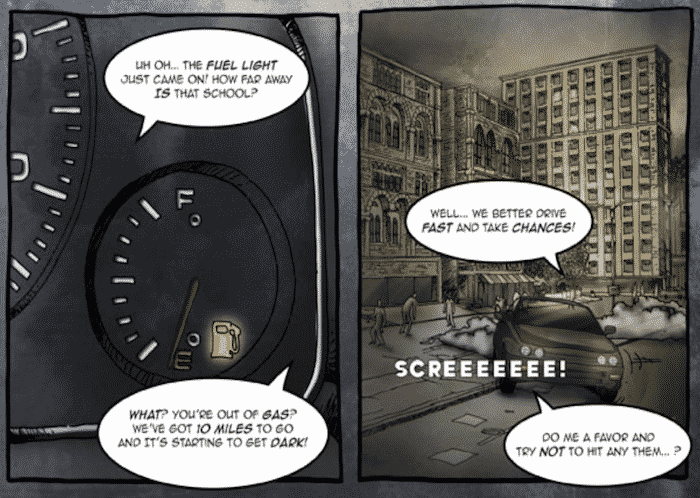 Charge forward and think recklessly, a surefire recipe for mitigating loss during a catastrophe.

After arriving at the cleanest, most organized refugee camp in the world, Todd and Julie put their complete faith in the government. And that’s where everything goes to crap.

Life in the Shelter Is an Excerpt From a Fairy Tale

For a little while, things are looking up for Todd and Julie. There are food and beds at the shelter, and nobody is bringing down the vibe by mourning loved ones, complaining about the lack of personal space, or expressing frustration at sitting around all day. Also, there’s apparently no smell from all those un-showered people fear-sweating in the same enclosed area. Maybe Todd shared his stash with them.

Anyway, after a few days, secure inside their untouched bunker laboratory, the nerds at the CDC come up with a zombie cure. It’s just too bad that some dill hole decides to send the life-saving shipment to Todd and Julie’s refugee camp like 20 minutes before the sun goes down and the zombies (who are primarily nocturnal) come out to play.

You can guess what’s coming next. It’s hard to administer a vaccine when a zombie is ripping your arm out of your socket. 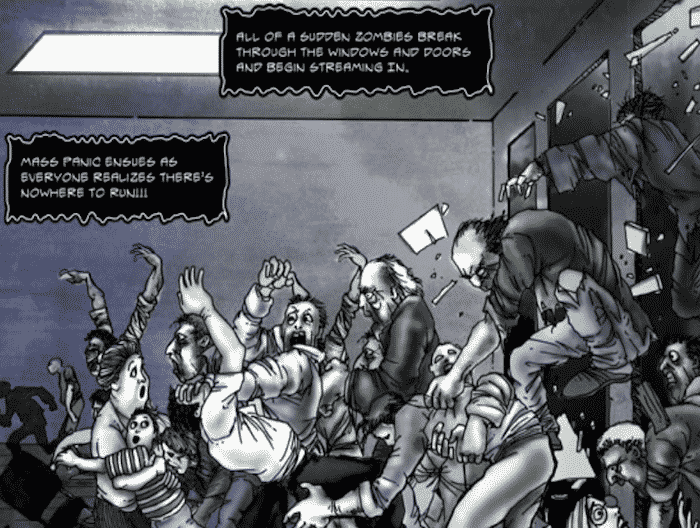 The Real Message of the CDC Zombie Preparedness Comic

Todd and Max are seconds away from joining the undead party when the CDC Zombie Preparedness Comic pulls a Dallas/Lost/Buffy the Vampire Slayer/Ninth Season of Roseanne and reveals that the whole zomb-pocalypse was just a bad dream. Fortunately, Todd learned a valuable lesson: always keep an emergency preparedness kit around because the government cannot be trusted to keep you safe.

After all (at least from the perspective of a CDC marketing pro) the only time Todd, Julie, and their dog enjoyed relative comfort and safety was in their home, out of the grasp of blundering bureaucratic incompetence. The moment they put their trust in the folks in charge, Todd and Julie are forced to take dangerous risks. Even when they manage to survive those trials, a scheduling screw-up gets them killed. If only Todd and Julie had more supplies on hand, they wouldn’t have needed to descend into the unreliable maelstrom that is the United States government.

A lesson we can all take to heart.

ACE May Have Fired ‘When The Zombies Come’ Documentary Kids