Twitter Helps Make the Longest Poem in the World

When you think of what a really long poem looks like, you likely think back to what you learned in High School. Maybe one of those ancient Indian poems? Maybe the olde English Beowulf? However, you probably don’t end up thinking of a Twitter feed.

The website, “The Longest Poem in the World” has a collection of over 231,000 tweets and is still growing. The site automatically collects random posts from all over Twitter and matches them up into rhyming couplets, with more being added in real time. 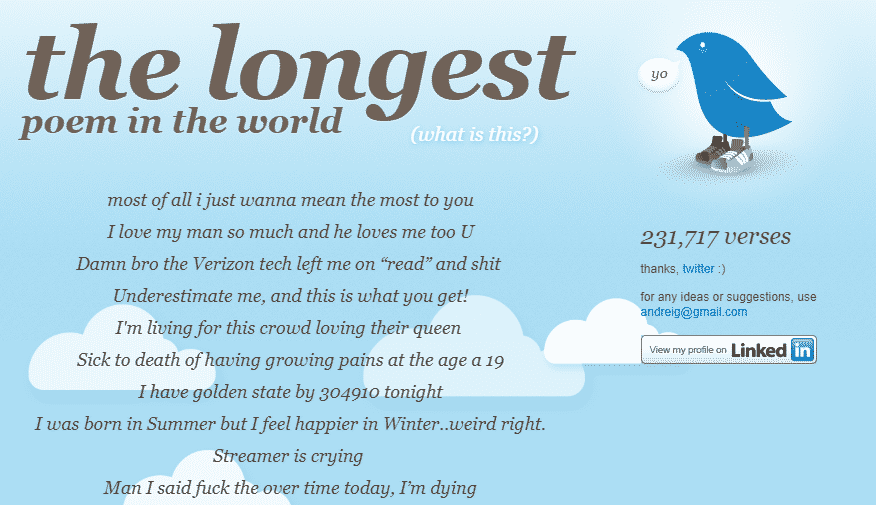 This results in a continuous stream of random thoughts that just happen to have rhyming last words. For example, as of writing this article, the most recent couplet reads, “Oh no i just bought a game that i wont probably play on Steam, Is this a memory or a dream?”

Is this a memory or a dream??

The pairs often have very little to do with each other. However, at times, it almost seems like some of these were put together on purpose, such as this NBA Western conference final hot take: “Look at all the hurt Rocket fans in the stands LOL, my scalp is starting to peel y’all.”

In a development post on Github, the developer describes his process. His site automatically fetches a collection of 100 tweets using the Twitter API. For each one, it is checked for viability using a pronunciation dictionary. Once new tweets get added, they are checked against any posts in the backlog that they might rhyme with.

The Mahābhārata, an Indian poem, is considered the longest poem in history with 220,000 verses. The Longest Poem in the World has already passed that mark.

Popular Twitter Hacks that will Surely Make You Laugh