Fresh-faced and optimistic, the nation’s newly minted college graduates prepare to go out and conquer the world. Only to discover that world-conquering pays $12 per hour and requires a Master Degree of World Conquering Studies.

Yes, it’s a tough life out there for college graduates. Especially with the Boomer Generation breathing down your neck about how great things used to be back in their day, when college tuition was literally $400 and you could get a job paying $50,000 a year in modern money right out of high school. Yes, those Boomers sure worked hard for their privilege and they’re damn sure not going to give any to you lazy avocado-buying snake people! 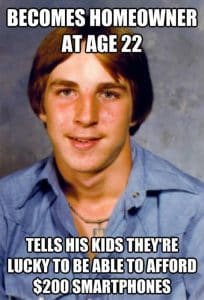 It’s not like the world has changed or anything: it must be that the modern generation is so dramatically different from everything that came before. Yes, it’s the youth of today who are wrong, not the system collapsing under flaws long hidden by demographic improvements and pay increases!

The best part is getting blamed for killing all these industries. Millennials get payed less than previous generations, they say. Why won’t you all get married and have kids and buy houses? I mean, surely your minimum wage job at Taco Bell can support that kind of life, right? Oh, you want healthcare? You’re young, you can’t possibly need medical attention because the stress of modern economic pressures is destroying both your heart and mind!

It’s hard out there for a college graduate willing to try hard and work their way up the ladder. Mostly because the bottom rungs of the ladder have been obliterated by market forces wielded by the last several generations’ inappropriate stewardship of the national economy. It’s starting to feel like America is about two-thirds of the way through “Rise and Fall of the Roman Empire”—and that’s where all the fun societal destruction starts happening!

White Privilege At Its Finest

Reddit Gets Real: “What Popular Life Advice Do You Disagree With?”