If it wasn’t clear before that Melania is being held against her will in her marriage to Trump, it certainly is now. The sinkhole that recently appeared on the White House lawn is proof that she not only despises the Don but that she has been forming an escape plan for quite some time. Perhaps even since the moment he won the election. In a nearly successful escape attempt, Melania was able to dig quite an extensive tunnel that likely would have brought her outside of the White House gates long before Trump’s 2020 campaign went full force. Unfortunately, her eagerness got the best of her, and she underestimated the burrow’s distance from an old septic tank, which led to a visible sinkhole that deterred her escape plans almost immediately.

Of course, the Don has done his best to cover up this reckless stunt, but we all know the truth. It may not have been easy for the First Lady to get down and dirty but it would seem that her desire to escape was far more important. Rumor has it that Melania used nothing but an old hairbrush and one of Trump’s many Emmy Award replicas that he keeps in his trophy case next to his Nobel Peace Prize copy and his photoshopped Time Magazine covers to get the tunnel started. Here’s what we know about the story so far.

Melania Hung A Poster To Hide The Hole

While Melania and the Don may sleep in separate bedrooms, she’s contractually obligated to allow him to visit on a monthly basis before she starts bleeding out of her wherever. So, while she didn’t have to work too hard to hide any evidence of her escape attempt, she did start her dig in the back of her walk-in closet, and in true Shawshank fashion, she hid the hole behind a poster. Insiders are saying that the poster depicted a photo of her and Trump from the campaign trail, back where it all began. They claim she was banking on the fact that her husband would ignore the poster as he ignores her in real life every day. She knows her man well.

After Melania had achieved enough depth where she could no longer rely on her closet’s fluorescent lighting to guide her, she began dropping 24-carat gold forks and knives every few feet. A super reliable source revealed that they were from a silverware set that Trump had brought to the White House from New York, one that Melania happened to despise. Her cellphone’s flashlight was able to bounce off their shiny surfaces easily, ensuring she wouldn’t get lost during her journey. It also helped to soothe the First Lady’s PTSD, as she came into the country in a very similar fashion and doesn’t exactly cherish those memories. She was beginning to have flashbacks of her life before she was rich, so the gold silverware helped remind her. Apparently, she didn’t drop the spoons because they’re worth more and she intended on pawning them once she got to the other side.

Melania Had To Crawl Through More Shit Than Andy Dufresne

During her digging, Melania made the mistake of attempting to use one of the gold forks she had been marking her path with as a tool in hopes of speeding up the process. Without realizing it, she was digging near the old White House septic tank which has more cracks and holes in it than Abe Lincoln on the day he was shot. By loosening this dirt, the septic leaks were able to spread easily, eventually compromising the stability of the soil. Somehow, Melania kept at it and never realized for a moment that she was trecking through urine and feces that the last dozen or so presidents had left behind. A shifty insider told us that the First Lady lost her sense of smell after a nose job gone wrong many years ago, and likely thought she was making her way through some mud. So, in the end, she wound up crawling through more shit than Andy Dufresne. She must really hate her day job.

Melania Had A Meltdown When Sinkhole Destroyed Her Hard Work

When the sinkhole came crashing down on Melania’s hopes and dreams as well as the tunnel she had dedicated her time to for so many months, she practically had a nervous breakdown. The White House staff had never seen someone so upset over a hole in the ground before and actually sent someone out for ice cream to help calm her down.

Fortunately, Trump was away playing golf and pretending to be president, so the staff covered it with toppings from the president’s personal stash of whip cream, M&Ms, and caramel that no one, including Melania, is allowed to touch. In fact, Melania is constantly on a diet in order to maintain the weight the Don put in their marriage prenup. I bet she wishes she had added her own stipulation on that subject.

The insider who has been giving us all this incredibly true information told us that Melania refused the ice cream sundae, throwing it into the hallway where it landed on the White House floor. One of the staffers later caught her eating it off the ground with a gold spoon in her mouth, sobbing and muttering things in a language he didn’t recognize. Needless to say, he wasn’t able to clean up the spilled ice cream that evening. 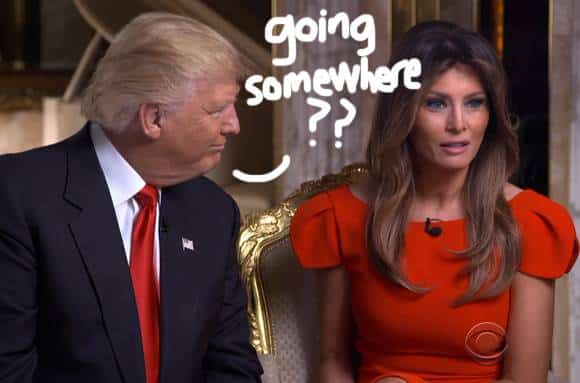 Melania may not have been able to disappear like a fart in the wind, but it’s just a matter of time before she comes up with a new escape plan. While this was her most elaborate strategy thus far, there have been rumors of her hiring a look-alike and sending her to spend nights at the White House. When she was caught, Melania said it was a prank that they all fell for, but then she was caught on surveillance cameras attempting to pose as a tourist and even stole a secret service uniform in hopes of walking right out the front door. But you know what they say. Hope is a dangerous thing. It could even make a woman go insane.