Trump Pulled Out Of North/South Korean Summit Because He Thought...

After amassing hype, Trump abruptly canceled his planned summit with North Korea’s Kim Jong Un and South Korean President Moon Jae-in. Speculation spread like wildfire over Trump’s prospect for a Nobel Peace Prize in the weeks preceding the planned talks. Though, no one could quite adequately describe what Trump contributed to the process, other than antagonizing North Korea’s unpredictable leader. Still, many felt the US President who threatened “fire and fury” deserved the highest honor for peace-makers.

And yet, despite the promise of sycophants lathering the President in unearned glory, Trump withdrew the US from the talks, blindsiding the two Korean leaders in the process. But why? Really, all he had to do was attend and sit quietly.

As it turns out, President Trump misinterpreted the logistics of the meeting.

When he heard that the historic peace talks were being called “a summit,” he assumed that meant they would take place at the top of a mountain.

Having no desire to climb a mountain, President Trump decided he would rather pull out from the meeting. After all, he’s a 70 year old man one pound under medical obesity who can barely climb stairs as it is.

In Trump’s mind, there are complex dangers associated with climbing a mountain.

For one, it would certainly drain an exorbitant amount from a human’s finite battery of energy.

For another, Trump is possibly afraid of stairs. And what is a mountain, but a giant set of stairs? 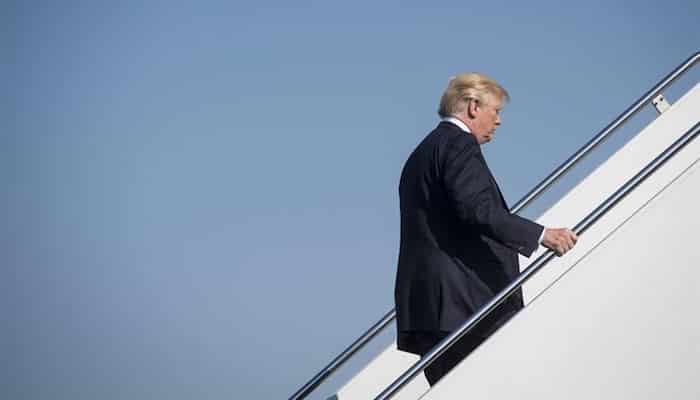 “We explained to the President that it may be called a ‘summit,’ but it won’t necessarily take place at the top of a mountain,” commented a White House staffer, shrugging. “But he just keeps saying, ‘There’s no way I’m going to climb a mountain.'”

Those who suffer with bathmophobia possess a fear of both stairs and slopes in general. It would explain Trump’s general aversion to metaphorical upward progress as well, as seen in his desecration of US tax code, race relations, immigration, foreign policy, and the country as a whole.

“It all goes back to his bathmophobia,” said the staffer. “He doesn’t want any of this.” At this point, the staffer mimed an upward slope. “Just this.” He then mimed a flat line.

Following Trump’s withdrawal from the peace talks, South Korean President Moon Jae-In met with Kim Jong Un anyway. Upon meeting at the Line of Demarcation, the two longtime adversaries shook hands and hugged. Kim wondered why it took so long.

After the surprise meeting, Moon assured the media that Kim was as committed to denuclearization as ever. However, he had new concerns. 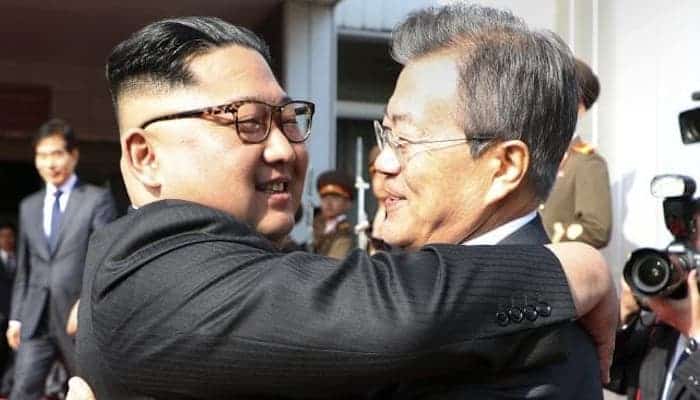 “What is unclear to Chairman Kim Jong Un is not the will for denuclearization, but the concern that if (North Korea) denuclearizes, whether the US can end hostile relations and guarantee the security of the (Kim) regime,” said Moon.

The newly arisen worries were not unfounded.

Prior to Trump’s departure from the planned summit, some in his administration unwisely drew parallels between North Korea and Libya. The comparison made by Trump’s national security advisor, John Bolton, and later echoed by Mike Pence, drew suspicion. After all, disarmament led to the eventual deposition and death of the country’s chairman Moammar Gaddafi.

Anger freshly flared, Kim Jong Un’s Vice Minister of Foreign Affairs issued a fiery statement. It read, “as a person involved in the U.S. affairs, I cannot suppress my surprise at such ignorant and stupid remarks gushing out from the mouth of the U.S. vice-president.”

Quickly, Trump walked back the sentiment, assuring the North Korean leader he would “be in his country; he’d be running his country.”

Making A Mountain Out Of A Meeting

Despite all the drama, the meeting seems to be back on the table, with numerous logistics tumbling through a White House administration constantly at war with itself. Whether the summit takes place on June 12th as planned, or later, hoping North Korea will be more agreeable to terms after a longer time under tight economic sanctions — Trump acts on impulses, often contradicting sense in favor of going against an adversary.

Indeed, when a White House official expressed doubt over whether the unexpected turbulence regarding the summit would allow enough time to plan for the June 12th date, Trump blew up on Twitter.

“The Failing @nytimes quotes ‘a senior White House official,’ who doesn’t exist, as saying ‘even if the meeting were reinstated, holding it on June 12 would be impossible, given the lack of time and the amount of planning needed.’ WRONG AGAIN! Use real people, not phony sources,” he tweeted.

Embarrassed by the perception of unpreparedness, Trump preferred claiming the official never existed to admitting someone on his staff had concerns. Immediately, members of the press corps corroborated the Time’s reporting. After all, it’s hard to claim a person who spoke to a roomful of news reporters never existed.

“He’s still caught up on the summit thing,” said a reporter. “He’s just lashing out because he has anxiety about having to climb a mountain.”

“He thinks Mount Everest is in Korea,” said another reporter, sighing.

Trump, like a feral animal backed into a corner, sees no positive outcomes. He saw the glory. He saw the Nobel Prize. And he wanted the peace talks — not because he was fully aware what countries he would be speaking to, but because he wanted media recognition for doing something good. But then, people started talking about “the summit.” And everyone knows, summits are on tops of mountains.

His bathmophobia triggered, Trump began to see upward slopes wherever he looked, as long as he didn’t look at a graph of his approval numbers. Panicking, surrounded by slight verticality merged with horizontality, he did the only thing he could: he pulled out of the meeting. He just couldn’t do it.

But if there’s anything Trump hates more than upward slopes, it’s bad press. And by withdrawing from the peace talks, bad press suddenly consumed him.

Who knew the President of the United States could have so few options?

What choice did Trump have, but to take it all back? Pretend it never happened? The talks are back on — in fact, not only are they back on, but they were never off.

And he’ll be at the summit. At the top. And you know why? Because he’s bringing his golf cart. 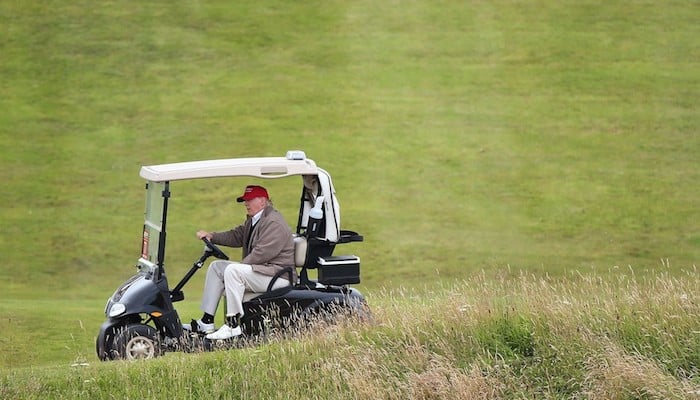