IndaHash is an influencer platform that launched the IndaHash Coin cryptocurrency which lets brands remunerate social media influencers in digital currencies instead of cash. The platform has about 300,000 social media users in over 70 countries, and it matches applicable brands to them. The main aim of the company is to tokenize the entire influencer industry to provide a solution to foremost issues between brands, influencers and fan bases.

Some of these challenges include how long it normally takes for advertisers to pay influencers. According to the company, the payment terms usually takes between 30 to 60 days the most. However, by using digital tokes, they will get paid right away, and businesses have the option to pay influencers in fiat currency still if they want to.

IndaHash is one of the biggest platforms today for brands and influencers. It was created in 2015 as a by-invitation-only network. The main idea behind it was conceptualized by Barbara Soltysinska, the company co-founder, and current CEO. Her idea then was to systematize the process of partnership between brands and social media influencers.

The company’s growth throughout 2016 was fast as they opened up offices in Berlin, Warsaw, and London. Ultimately, major brands came on board like Pepsi, L’Oreal, Lay’s Huawei, Nestle, Red Bull, McDonald’s, MasterCard, T-Mobile, Adidas, Subway, Samsung, Volkswagen, Merck, Heinz, Nestle and many more.

In 2017, they expanded further and opened offices in Johannesburg, Dubai, Singapore and New York. Currently, IndaHash operates in around 70 markets worldwide.

What are Social Media Influencers?

In the last two years, we’ve seen rather fast growth in the influencer industry. We’ve seen social media start advertising random products after another. You’re also probably wondering how that travel blogger you’re following on Instagram can afford his lifestyle. Basically, these individuals get paid to promote products online, either on their blog, vlog or social media accounts. They are called influencers because they are able to influence a substantial percentage of their audience.

And for that reason, IndaHash came up with the idea to connect these influencers with brands associated with their niche via a digital token and a decentralized marketplace. IndaHash is actually a working app that’s already being utilized by both brands and influencers across the globe. In fact, it is currently one of the biggest and most well-known global platforms for influencer’s marketing campaigns. Aside from boasting hundreds and thousands of influencers, they also have more than 400 clients which include Fortune 500 firms.

How Does IndaHash Coin Work? 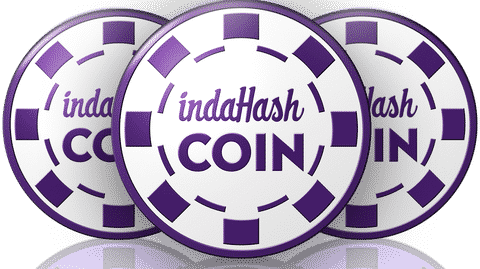 IndaHash’s main purpose is to build a crypto-economy with its very own IndaHash Coin. These digital coins will circulate amongst the brands, influencers, and their audiences. The brand will use IndaHash Coins to compensate influencers for their marketing campaigns. When influencers receive the coins, they can then exchange them for that brand’s products or services and get discounts as well when shopping, alongside gaining first access to new product offerings.

Here’s a quick look at how IndaHash works on each of parties involved in the platform:

IndaHash is not just about businesses and companies having the capability to pay users of social media with cryptocurrency, the social media stars themselves can also reward their audiences with tokens. In addition, their followers will have their own profile with IndaHash where they will be able to see their token balance from all the influencers they are following.

Advertising products and services using social media influencers have exploded over the last couple of years. Millennials pay more attention to what’s trending online, and they’ve tuned out TV ads and billboards. A new generation of buyers trust products recommended by people they know and admire, like these social media personas. IndaHash is brilliant to take advantage and utilize this growing industry and advertising economy to come up with a marketplace for influencers and brands.

Today, the company has already made a mark and is now one of the biggest influencer platforms in the world. They aim to build a virtual coin that can be utilized by both the influencers and their followers, while still allowing brands to buy ad campaigns.

One of the biggest differences between IndaHash Coins from credits is transparency. This means that brands and influencers can instantly see the coins every influencer has redeemed or paid, via the distributed ledger of the blockchain.

However, paying their followers, either by tokens or credits, would appear to misrepresent the full logic of influencer marketing, because the whole idea turns influencers’ fans into some kind of employees. But these payments from influencers also aid in rewarding their followers and sustain a community.