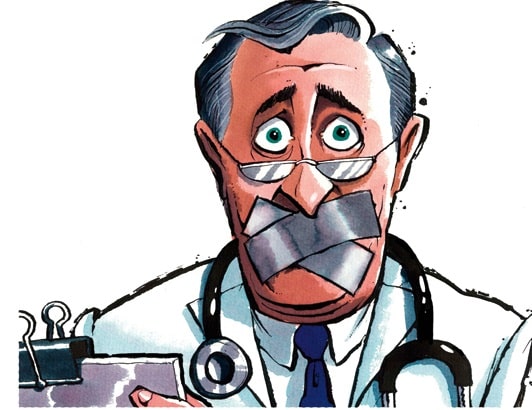 Donald Trump and his right-hand man Mike Pence will stop at nothing to defund Planned Parenthood and prove once and for all that women are second-class citizens. Their latest move is introducing a domestic gag rule that would ultimately forbid the use of the word “abortion” in your doctor’s office. Technically, you can ask about it all you want, but any government funded facility will be forbidden from speaking about such a procedure. This includes being banned from offering abortions, recommending any abortion clinics, or even sharing a building or facility with those who perform the procedure. As punishment for those who choose not to follow suit, the government will be able to stop funding them.

This would leave Planned Parenthood in quite a predicament. After struggling for as long as they could on donations, they would likely then be forced to close the doors of dozens of locations. Either that or stop offering abortion services, which goes against most of what they stand for. This is a clear attack on women’s health and reproductive rights and could have some serious consequences. Abortion facilities will go back underground, there will be no regulations on how far into a pregnancy an abortion can take place, death rates will go up as women try to terminate a pregnancy on their own, STD rates will increase exponentially, breast and cervical cancer screenings will no longer be affordable, prenatal care will be impossible for many families, women will start going online to find affordable birth control, and the list goes on.

So, in response to this attempt at censoring abortions, women have come together and come up with a list of a few things that we’d like censored as well. Hopefully, the men in government won’t be too upset once these other gag rules are enstated.

No More Oggling Women At Pools And Beaches

Men in government will no longer be able to go to public pools, beaches, or any other facility where women often walk around partially nude or in bathing suits. They will be provided with private facilities, where the only women that can accompany them are their wives and children under the age of 17. To be considered a wife, the couple must have been married in a church by a priest before the conception of any children. The men in government will be forbidden from being in the presence of any woman or women in lingerie or bathing suits other than their wives, censored from cleavage and butt cheeks.

Men in government can say goodbye to seeing half-naked women prancing around in their lingerie while flipping through magazines or during television commercials. All of their television consumption will be monitored and restricted to only include G and PG-rated shows. The same will go for any streaming services they use such as Netflix or Hulu. Magazines will also have to adhere to these ratings, making Maxim, Playboy, and similar reading materials strictly forbidden. Family members living under the same roof will also have to abide by these censorship rules or face the consequences of the gag order.

Incentive Programs For Strippers And Sex Workers Will Be Enstated

To keep these men in politics out of strip clubs and away from sex workers, an incentive program will be put in place that will pay off these ladies and club owners to turn them away. Any male politician caught partaking in these sorts of indulgences will be found in violation of the new gag rule, where they’re forbidden from partaking in sexual activity with anyone other than their spouses. Even “just looking” will be considered a violation, no matter how they claim they can make it rain.

This new gag rule would forbid the use of the words “erectile dysfunction” and “Viagra” by doctors or healthcare professionals when tending to any male politicians. Prescriptions cannot be written out for any erection inducing medication, nor can their doctors inform them of where they can go to get them on the streets. Any doctor who fails to comply with this part of the new gag rule will be punished by having to volunteer for 25 hours per week at the nearest Planned Parenthood.

Repercussions For Not Following Gag Rules

For each occurrence where a single member of Congress, a mayor, a governor, etc. fails to follow these rules, a Planned Parenthood will get back their funding as well as their right to provide patients with safe and affordable abortions. This must happen even if they have to fund the facility from their own pockets. They’ll be able to keep their jobs, however, failure to follow through with properly funding Planned Parenthood will result in public shaming. Evidence of their indiscretions will be released to the media, likely encouraging them to “retire.”

If you haven’t already noticed, this new gag rule does it’s best to take away anything that might inspire these male politicians to beat their meat as the young kids say, ultimately attacking their rights to do what they want with their bodies. Sounds familiar, right? An eye for an eye, as Hammurabi would say, but since men don’t have a uterus, this is the next best thing to target. Perhaps if these men who control our laws have rights to some of their body parts taken away, they will be able to better understand what defunding Planned Parenthood means for most women. And if they don’t, well they can live the rest of their lives without an erection for all I care.

Battle of the Crazies: Rodrigo Duterte vs. Donald Trump