Donald Trump is the Most Goodest at Science

In administrations past, the President of the United States happily handed off the science’ing to a bunch of nerds and shut-ins who touted themselves as “experts,” empowered by something called “years of research and collected data.” Well, not anymore.

Now that the country is in the hands of a “very stable genius” and not a Kenyan-born community organizer intent on transforming the country into a socialist hellscape, the White House can do science the right way. The Trump way.

As of November 2016, science is no longer constrained by the unfounded claims known as “facts.” No longer is the Scientific Method the preferred way to get results — that whole rubric just teaches you to think inside the box, anyway. In the new administration, science is whatever Donald Trump says it is.

For an average man, that burden might seem like too much, but in the hands of Donald Trump, science is a shifting organism that only he can adequately decode. Hell, he’s been doing it for the last decade on Twitter. His skills in science are so pronounced, in fact, that someone took the time to turn Trump’s delicate relationship with science into a video game. (check out TrumpVsScience (https://trumpvsscience.com) for some good, work-avoiding fun).

So, in place of a textbook that would need to be updated on a daily basis, here are some of Donald Trump’s most profound scientific breakthroughs.

Get the Right People to Strut Their Stuff

When Obama was President, he wasted his time hiring some guy named John Holdren as science advisor. Holdren was a real dork who graduated from MIT and then got a Ph.D. from Stanford before teaching at Harvard.

Dubya had three science advisors over the course of his eight years, and they touted dumb college degrees and doctorates from places like Boston College, Princeton, and Stanford (again).

Donald Trump’s designated science advisor has them all beat. This person has a degree from … nowhere. It’s nobody. Donald Trump had not named a science advisor because he already knows all the science. Trump is so confident in his science’ing that he’s even “gutted” the Office of Science, Technology, and Policy according to the letter issued by 575 members of the “scientific” community.

Fortunately, Trump has a lifetime of impressive science skills to fall back on. For instance:

Some Light Bulbs Cause Cancer

Just in case you thought you were helping the environment by purchasing longer life environmentally friendly light bulbs, just remember that you’re putting your own life in danger.

Global Warming Is a Chinese Conspiracy

Global warming — known as climate change to people who have read a news article in the last five years — is a scientific topic of particular interest to Trump. The President has tweeted out his thoughts on climate shift more than 100 times over the course of his Twitter residency. Because it would be counterintuitive to list them all, suffice it to say that the President believes that global warming is total BS.

Now, it directly contradicts the Trump method to list evidence of that, but … you know, gotta fill up space and all.

In 2012, in the middle of a rant about how aggravated he was at Obama winning a second term, Trump dropped this little (now-deleted) gem: 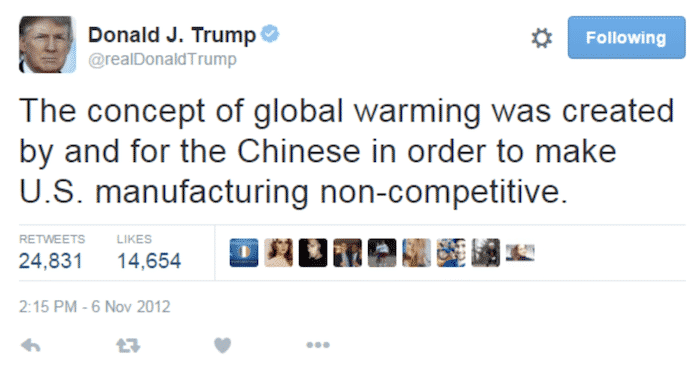 Renewable Energy Is Brought to You By the Devil

Thank White Jesus that someone finally said what we were all thinking: wind farms are a blight on the landscape, and renewable energy was sent here to kill us all. Donald Trump said as much when he tweeted the results of a totally legit science-type person named Carl V. Phillips.

Phillips told Pennsylvania’s Lee County Zoning Board of Appeals that he had “overwhelming evidence” that wind farms cause mood disorders and increase stress for locals up to two miles away.

The danger of shadow flicker will eradicate humankind if wind power is allowed to expand. That’s just science.

Science has long propped up the notion of changing weather by explaining some cockamamy nonsense about the Earth spinning on its axis while also rotating around the Big, Yellow Light Bulb in the sky. But Trump understands that these “seasons” as they’re called are the smoking gun that just put a bullet in the head of these climate change lies.

Those Twitter users looking for a little truth with their weather reports can catch Trump debunking the myth of global warming during heatwaves and cold spells alike, all year round.

Ebola Is Going to Get Us!

All the way back in 2014, people were positively freaking out about the threat that Ebola posed to the world at large. While the CDC urged calm, explaining that Ebola was largely contained and nothing to shut down borders over, Trump cut through the bull and demanded action.

Good thing people took action and shut down ebola-ridden Africa, turning it into the isolated husk it is today … wait, that’s not what happened? Just WAIT!

Want to Do Science Right? Start With a List of Banned Words

Though Obama chose to celebrate the money he was flushing down the toilet by funding dumb science experiments, Trump has already seen a vinegar volcano, so he knows there’s not much else you really need to explore.

So thoroughly is this message being communicated to the people making science, that the higher-ups at the CDC made headlines by issuing a list of seven words that people should avoid using should they want their projects funded. Among icky words like “fetus” and “transgender” were the terms “evidence-based” and “science-based.”

The message has been received. Trump won’t tolerate any old-fashioned notions espoused by people who probably didn’t even get laid until they were well into their twenties.

The Science Of Hell, Explained By An Engineering Student