Since Kanye West announced on Twitter that he not only supports the president but that both he and Donald Trump share some kind of “dragon energy,” the similarities between these two men have become more and more apparent. Specifically, these similarities can be found in their irrational outbursts and often nonsensical rants on social media, which we will be looking at here. See if you can figure out who wrote these examples of the most absurd and idiotic tweets. Was it Trump or Kanye?

“My twitter has become so powerful that I can actually make my enemies tell the truth.”

So, it would seem that the author of this tweet thinks quite highly of himself yet very little of his enemies. It also would appear that they’re foolish enough to write such a thing on a platform where their enemies would be able to read it, clear as day. They likely weren’t telling him much after reading what he had to say about them. This tweet demonstrates personality traits of both Kanye and Trump, so who wrote it?

Even back in 2012 Trump was making enemies left and right. Why on earth he would tweet this is a mystery, as it would make more sense for him to keep this kind of information to himself. Likely he’s just tooting his own horn, as usual.

“I have no interest in working with anyone who is too important or too good or too traditional to take a call at 3 am.”

Part of being an entrepreneur is working long hours, but expecting people to take your call and discuss business at three in the morning is a bit ridiculous. Time is money, yes, but sleep is kind of important. Not only does it keep you alive, but it also gets rid of those voices in your head. Sometimes. So, who tweeted this, Kanye or Trump?

Insomnia much? Kanye’s insistence on doing business in the middle of the night might actually explain his erratic behavior. Perhaps he’s just been sleep deprived throughout his entire career, causing him to speak without thinking first.

“Every time I speak of the haters and losers I do so with great love and affection. They cannot help the fact that they were born f***ed up!”

Both Kanye and Trump seem to have a ton of haters and will entertain them online by engaging with their cruel and often attention-seeking comments. While Kanye will take long breaks from social media to get away from the trolls, as POTUS Trump doesn’t have that luxury at the moment. Using the word “losers” in this tweet kind of gives this one away, but who do you think tweeted this?

Our president always seems to have something to say about those he considers “losers,” but this tweet is a bit harsh. Also, what’s that expression? People who live in glass houses shouldn’t throw stones, Mr. President! Someone really needs to take this guy’s Twitter account away from him.

“The last thing our country needs is another BUSH! Dumb as a rock!”

We all know how Kanye felt about former president George Bush. If your memory needs to be jogged, back when Hurricane Katrina hit Louisiana NBCUniversal presented “A Concert For Hurricane Relief” which attracted dozens of celebrities. On live air, he and actor Mike Myers were asking that people make donations when Kanye decided to go off script. Making one of the most shocking statements of all time, Kanye declared that George Bush didn’t care about black people. So, was it him who tweeted this or was it Trump?

It would seem that Trump and Kanye share similar political views alongside all that dragon energy. Bush may have been dumb as a rock, but unfortunately, Twitter wasn’t around back then for him to document his intelligence for examination. When future generations look back at those in office during these past few decades, they certainly won’t be calling Bush the dumb one. Or the other Bush. Spoiler Alert: It’ll be Trump’s intelligence that they’ll be questioning.

“Sometimes I push the door close button on people running towards the elevator. I just need my own elevator sometimes. My sanctuary.”

We’re all guilty of impatiently pushing the door close button in elevators, but to do it while someone’s running to catch the lift is pretty messed up. Since both Trump and Kanye have over-sized egos, they both have a reason for needing their own elevator. Their heads wouldn’t be able to fit otherwise. But which one of these maniacs would consider a 15-second elevator ride their sanctuary? 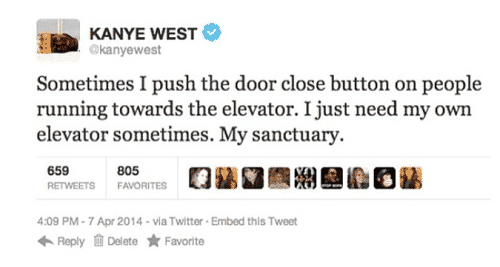 It seems that Kanye only needs a few seconds alone to compose himself and reset his mind, and even an elevator ride will do. Perhaps if he took some more time to meditate and find sanctuary in an area that wasn’t designed for people to get in and out of in under a minute he would be slightly less mad. Perhaps he likes elevators so much because it’s where he can take his naps so that he’s well rested for his business discussions that apparently occur in the middle of the night.

Persian rugs are clearly important, maybe even essential, to the person behind this tweet. That just leaves us to wonder whether it was Trump or Kanye who wrote it. If the rug is embellished with gold, then we’d know for sure it was Trump who posted this tweet as he thinks gold is the color of wealth and success. On the other hand, cherubs have something to do with gods, and we all know Kanye thinks he some kind of deity. So, who tweeted it?

With Kanye’s involvement in the fashion world, it should come as no surprise that he’s a tad picky about interior design as well. We can all probably agree that a request for a Persian rug with cherub imagery sounds as far from simple as it could be. But for Kanye West, his wish is everyone else’s command.

Who Said It? Trump vs. Voldemort

HUD Does a Great Job Increasing Rent For Poor People