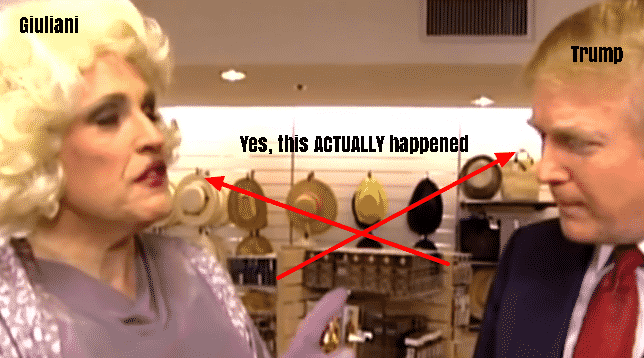 Rudy Giuliani is kind of a crappy human being. I know that is a very biased way to begin an article but the reality is, over the last few years in showing his devotion to Trump he has slowly revealed a much truer version of himself to the public, and that man-boy is a name-calling juvenile who is no different than Trumplestiltskin himself at the end of the day.

For further proof of this (as if I have not posted enough damning evidence already, which I have) we have yesterday, when Rudy Giuliani called Stormy Daniels lawyer a “pimp.” I don’t even need to give you context. Giuliani called him that because he is the lawyer of a porn star. Yes, he said “pimp. this is grade school behavior on display by the supposedly full-grown “men” who run this country and in doing so, represent us. Nah, I gotta be real here. Grown men name calling does not represent me as an American, nor does it represent most of us.

The crazy thing for me is this stuff no longer angers me to write about. Just makes me sad for these simpletons (and us in the long run). A glaring testimony to just how sad and silly politics have become in 2018. It is self-satire at its finest (and saddest), truly.

And Rudy Giuliani (get ready because I use this joke a lot, but it would be a missed opportunity not to) once again shows us why you cannot say his name without using the word rude.

Here, read this. It will leave a much better taste in your mouth for the weekend.

The world is devastated by the news that Britain’s Prince Philip, the Duke of Edinburgh, has died at the age of 99. Palace media confirms that the Duke has expired mid-day today, April 9th. The announcement did not contain any specifics on the cause of death. The United Kingdom will enter a state of national… END_OF_DOCUMENT_TOKEN_TO_BE_REPLACED

Who would have known that religious prophets would be among the most loyal supporters of former President Trump? In fact, it has been observed that the most conservative Christians may have been the right amount of push for Trump’s presidential win back in 2016. Since Trump’s election back in 2016, numerous self-proclaimed “prophets” have been… END_OF_DOCUMENT_TOKEN_TO_BE_REPLACED

President Biden falls and slips multiple times on the Airforce One Steps and PEOPLE ARE GOING CRAZY! What’s the big deal? Some people are hating, while others are making memes just for the fun of it. We are all human, aren’t we? Everyone’s expected to stumble some time in their lives. However, with the internet… END_OF_DOCUMENT_TOKEN_TO_BE_REPLACED