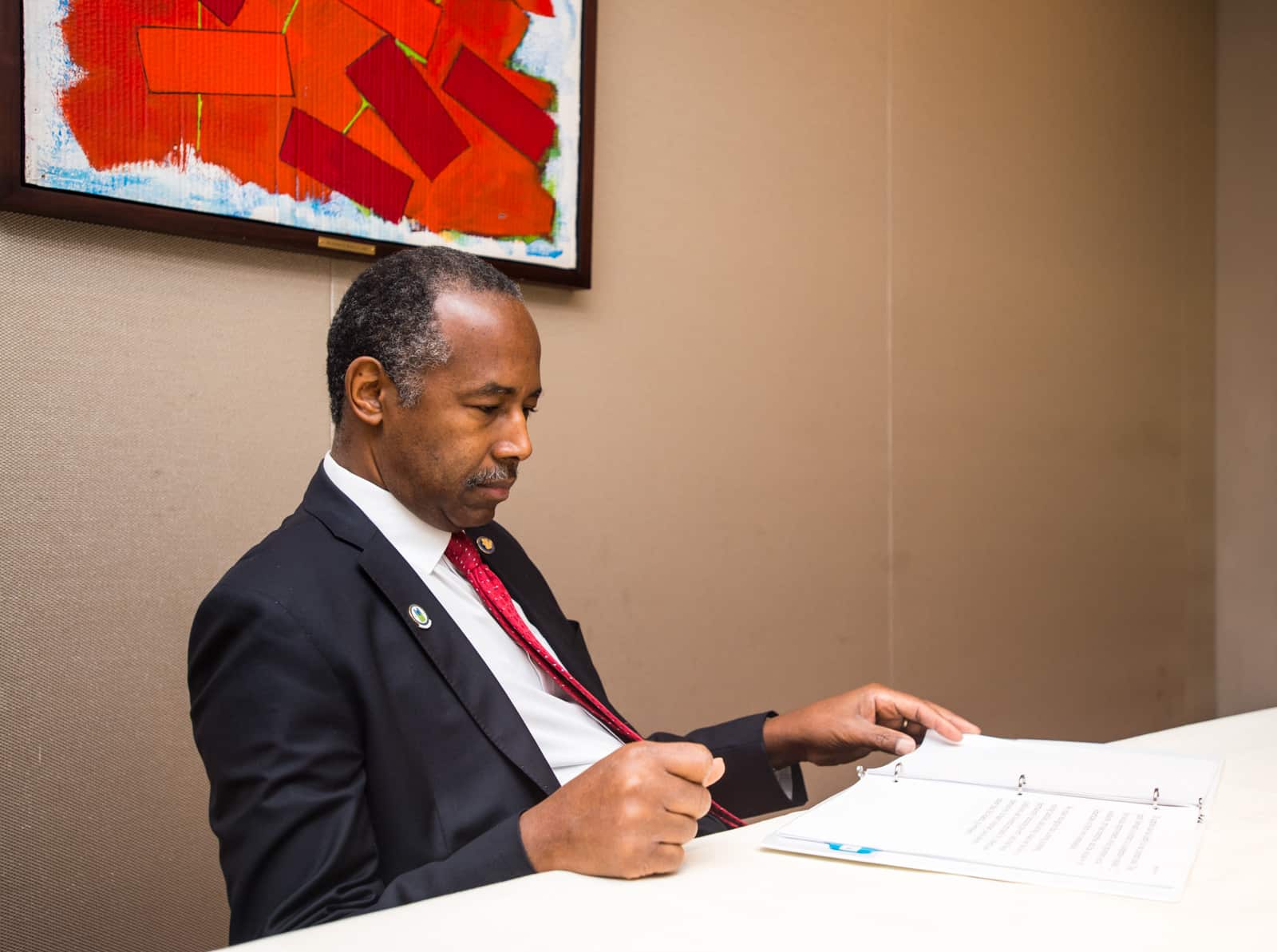 The Department of Housing and Urban Development is supposed to help people afford housing. But here in the mirror universe, all government agencies now work with furious energy to perform the exact opposite of their originally stated purpose. Witness Scott Pruitt’s Environmental Protection Agency doing the best it can to lift restrictions made to protect the environment, the Department of Education making it harder to learn good, and the State Department running American diplomacy, not only into the ground, but into the billion degree molten metal composing the Earth’s core, where it burns in a hellish state of constantly dying without the pain ever truly ending.

So, like it’s fellow agencies and departments, the Department of Housing and Urban Development has made wonderful progress is making housing less affordable. HUD’s modern goal seems to be the punish the poor for the temerity of trying to scrounge their way out of poverty. Homelessness and unstable housing situations cause a raft of problems, especially for children, which the majority of HUD money directly or indirectly benefits. Physical and mental illness increase, school performance decrease, and neural development is stalled: a fact that Ben Carson, one-time brain surgeon, should be intimately familiar with. But if there’s ever been a proof that general intelligence doesn’t exist, it takes the form of Ben Carson, a highly skilled doctor who cannot otherwise reason his way out of a damp paper bag.

Under Carson’s fumbling leadership, HUD is scaling back fair housing enforcement and raising rents on the poor, old, and disabled while Benny spends $31,000 on furniture that his wife apparently picked out. These changers are meant to undo Obama-era rules that were intended to help ease the strain of systemic racism and income segregation on housing supply. Better still, this comes at a time when HUD is positively flush with cash thanks to federal grants meant to help citizens displaced by the many hurricanes that have ravaged the Gulf Coast and Puerto Rico. So while they could use that money to alleviate suffering, Benny has decided to cash it out as gold coins and stuff it in a vault, where he can dive into it like Scrooge McDuck. Maybe he thinks he gets a cut of the grants that he doesn’t spend. If there was a “most likely to imitate Michael Scott unwittingly” award, the winner would be Ben Carson by a mile.

It’s no surprise that the Trump administration should strike against these regulations. Hurt the poor AND undo something that Obama did? That’s got to be the equivalent of a wet dream for these fellas. And considering they couldn’t manage to undo the evil communism-cum-slavery that is Obamacare, they’ll have to settle for injuring smaller groups of impoverished citizens. Less efficient, but still effective. It’s a war against the poor, after all, and their brave, enduring war must be won somehow. As we all know, once all the poor people die from starvation and exposure, poverty will simply vanish, like tears in rain or dust in the wind or something.

What Poor Sucker Got Roped Into Being Secretary of State?

Gift-giving isn’t just a seasonal affair between friends, families and acquaintances. The art of gift-giving is also conducted on a national scale with countries often sending each other big, weird and expensive gifts. Experts in all things gifts, Vanilla Reindeer put together some examples of these expensive and odd gifts that have been shared between… END_OF_DOCUMENT_TOKEN_TO_BE_REPLACED

There are lots of ways you can make Pres. Trump feel welcome: you can offer him coffee, or mow a penis into a field for him to view as his plane lands. The willie in question has been chopped by Born Eco ahead of the arrival of President Trump, who visited the UK Monday for… END_OF_DOCUMENT_TOKEN_TO_BE_REPLACED

The year isn’t even halfway over, yet Donald Trump has managed to make a fool of himself and our country countless times. From inviting the national college football champions, the Clemson Tigers, all the way to the White House for some McDonald’s to his to the dreaded results of Mueller’s investigation, it has been one… END_OF_DOCUMENT_TOKEN_TO_BE_REPLACED

Republicans have always said that when they gained control in Congress, they would work to overturn Roe v. Wade and here they are, cashing in on that promise one state at a time. So far, Alabama, Arkansas, Georgia, Kentucky, Missouri, and Ohio have all passed incredibly restrictive laws on abortions, making it illegal for women… END_OF_DOCUMENT_TOKEN_TO_BE_REPLACED

If you’re on Snapchat, then you’ve probably played around with (and were likely horrified by) their filter gender swap filters. While you’re probably using these filters to send hilarious pics to your friends, some guys using them to create Tinder profiles. What likely started out as a joke has quickly evolved, and these guys are… END_OF_DOCUMENT_TOKEN_TO_BE_REPLACED

“Milkshaking” is a hilarious trend in Britain where a milkshake is thrown at and ideally lands on a far-right politician or activist. The point of this nonviolence protest is to humiliate them without causing injury. Physical injury at least. There’s no doubt that milkshaking has led to a few bruised egos. Not only is this… END_OF_DOCUMENT_TOKEN_TO_BE_REPLACED