Trump Loves Veterans But Doesn’t Want them Nearby

Much of Trump’s political supporters are the type of voter that loves veterans. Servicemen and women are one of the most all-American things you can support. With so much of America’s last sixty years of foreign policy made up of unjustified invasions, secret coups and wars of attrition, how could you not support the very instrument of that policy’s fulfillment? And while front-line soldiers cannot truly be held responsible for the moral reality of their overall mission, the adamant support of the armed forces while refusing to support other social structures makes it hard to believe that these folks don’t actually love imperialism. If you’re more excited about buying a fancy new jet than paying for food stamps, you’re organizing your social priorities incorrectly. But who the hell cares, we can always bomb the rest of the world into submission with all our WINNING! 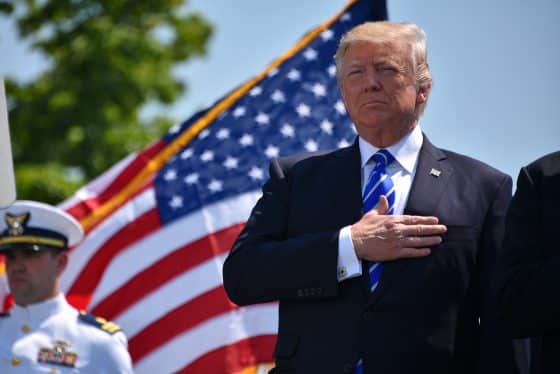 Trump, in fact, does not love veterans or servicemembers. Trump loves the image of veterans and servicemembers and what they represent to the pudgy morons that managed to toddle down to the voting booth and pull the lever next to his name. But when it comes to actually doing things on their behalf or showing his support in a way that requires his personal presence, he’s more apt to discover he has a pressing appointment with a golf tee in Mar-a-lago than actually deliver more than lip service for the soldiers he purportedly “commands.”

You might say that Trump loves the parade day version of the armed forces, with a Call-of-Duty-level of understanding about what actually goes into combat and military strategy. If Americans are shooting, they must be the good guys! If Trump could maintain the attention span required to sit through his top-secret briefings, he might discover that our guns are only one of the many tools in the disposable plastic bag of American foreign policy.

It’s not that Trump has done absolutely nothing for veterans. He did sign an executive order extending mental health care for veterans, and his party has rammed through a budget that allocates a humorous amount of money for the Department of Defense. It’s that he’s waved a hawkish flag while delivering on basically none of the policies that would actually help servicemembers and veterans, choosing instead to shout “DA TROOPS” from the White House lawn while infuriating anyone who actually cares about the military.