At the end of April, the White House welcomed its first official state visit since Agent Orange smirked his way into the White House in 2016. Considering that state visits can only occur at the request of the President, welcoming a foreign nation is a pretty big deal. So, who was the state leader that Trump desperately wanted to host?

The centrist president of the French, Emmanuel Macron.

In the last eighteen months, Macron has taken international politics by storm thanks to his Trumpian love affair with news cameras and his wildly uneven political stances (did you know you could be pro-business AND pro-environment? It’s insanity.) But who is this smiling French delight and should he be feared or beloved?

Regarding French exports, is Macron a croissant or a Gérard Depardieu? Read on to find out.

Emmanuel Macron is a first-generation rich kid who attended the country’s best schools, distinguishing himself as a wildly intelligent drama nerd. Of course, Macron’s enthusiasm for literature and theater might have been colored by the fact that he was sleeping with his lit and theater teacher, Brigitte Auzière, the married mother of three who was 25 years his senior.

The two broke off their tryst after a bit, though they resumed the affair in 2007, ultimately marrying (they’re still hitched to this day). Macron has since wildly understated the earlier parts of their relationship as “a love often clandestine, often hidden, misunderstood by many before imposing itself.”

Emmanuel Macron hasn’t lost his love for the older ladies, either. He recently drew attention for referring to the Australian Prime Minister’s wife as “delicious.”

‘The Mozart of Finance’

Postgrad, Macron spent a few years as an inspector for the French Finance Ministry. In 2008, Macron went corporate, joining an investment bank called Rothschild — which is a big deal if you’re a French numbers nerd, even if “Rothschild” sounds like the name of a whites-only gentleman’s club.

In the banking world, Macron helped Nestlé score a division of Pfizer that makes baby food for the tidy sum of $11.85 billion. That deal earned Macron his nickname, “the Mozart of Finance,” and roughly $3.5 million. Not long after that, Macron decided that he’d had enough of the French private sector (le secteur privé?), so he jumped into politics, working for wildly unpopular French president (and — gasp! — socialist) François Hollande. 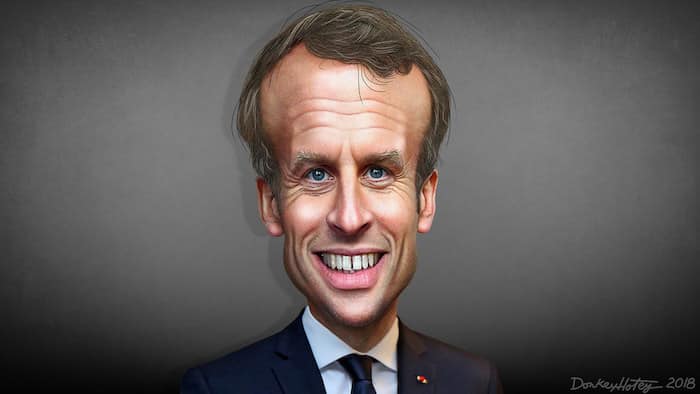 While working for Hollande’s socialist — aka, innately sinister — government, Macron managed to piss off both sides of the aisle with something called “Macron’s Law”. The extensive package of economic reforms was debated in the French government and protested by the French people for weeks on end. (Note: French people genuinely care about their politics. They care as much about politics as Americans do about the next season of RuPaul’s Drag Race. It’s almost like the country has a passionate interest in the world around them. It’s gross).

Then, when it appeared as though Macron’s Law was on the verge of defeat, the socialist — ugh! gross! — government pushed Macron’s Law through the government — not once, but twice — by invoking little-known statute Constitutional Article 49-3, better known as the “na-na na-na boo-boo, stick head in doo-doo” statute.

So, in 2016, Macron was getting tired of pretending to be a socialist, so he formed his own party, En Marche! (The exclamation point isn’t from me; it’s part of the party’s title. Exciting, right?)

Anyway, Macron pulled a Trump in the 2017 elections, driving his party past established favorites and even ousting the nation’s very own Trump clone, Marine Le Pen, a woman who blamed terrorism on immigration and once said, “Multicultural societies are multi-conflict societies.”

This isn’t cute; she’s going to eat the baby and deport the mother.

Given that Le Pen was Emmanuel Macron’s biggest competition, it’s probably good news that he took home the job of leader of the French. Since winning office, Macron has also done one or two other fun things.

When Trump decided to abandon the Paris climate agreement last year, Macron was quick to scold the US President, calling the decision a mistake.

Of course, Macron didn’t simply sit by and whine like a little girl. He stated that France would be willing to fun long-term research projects focused on the climate. Macron then verbally bitch-slapped the president by adding that it was time to “make the planet great again.”

To date, 14 American scientists have hopped the pond to take up residence in France, where their research is appreciated.

Macron Has Trump Wrapped Around His Little Finger

The two world leaders (well, one world leader and the orange dummy who wandered into our circle-shaped HQ) got off to a shaky start because of the environment stuff (and a handshake that lasted forty-five minutes).

Since then, however, Macron has figured out how to wine and dine the President. Honestly, it’s not that hard. You tell him how smart he is, that his hair looks great, and then you hold his hand. A lot.

Wine him and dine him with a dinner at the Eiffel Tower, arrange a crowd to fuel his planet-sized ego, and then — when you visit the White House months later — you can pull a total Macron and publicly chastise the guy in his own nation on everything from the upcoming Iran deal to Trump’s official position on the environment.

(Trump’s stance on the environment being: “Why should I care? I can afford air conditioning.”)

In France, Macron’s tenure as president has seen the finance guy follow in the proud tradition of all French presidents. Cliff’s Notes: they hate him.

On the one hand, French people are notorious for being pissed off at whoever is running the country. Liberal, conservative, lovably huggable kitten, it doesn’t matter. It’s like it never stopped being the French Revolution over there because the second someone takes power, it’s off to the guillotine for them.

On the other hand, the people who put Macron in office are annoyed that the new president is too aggressive in his reforms. Of particular note is a growing kerfuffle around the country’s rail system. Macron wants to defund the union’s “job for life with pension” guarantee in favor of de-centralizing things and making its management more accountable for, you know, sucking at their jobs.

As a result of reforms like this low-income households have begun to refer to him as “a president for the wealthy” and “too arrogant.”

Macron’s preternatural understanding of the job at hand (whatever that was) has defined his career. He has proven himself a friend of big business, a champion of the environment, and a man who is willing to do the unpopular thing to accomplish what he thinks is right. Depending on which perspective you approach that from, Macron is either a maverick do-gooder or a megalomaniac.

Maybe both are true.