by Warren Michaels 4 years ago2 months ago

Donald Trump spent his entire presidential campaign bragging. If we’re being honest, he’s spent the last 70-some years bragging, day in and day out. It’s like breathing for him: when Donald Trump talks, he boasts. He automatically turns everything he says into grandstanding. There’s a good chance he may not be able to control it.

He spent so much time during those two years of campaigning bragging, he inevitably ran out of things to brag about. It seemed to come to a head at a campaign rally in South Carolina, where he rambled on and on — he never prepared speeches, always preferring to speak off-the-cuff — until his mouth was saying things that his brain couldn’t keep up with.

“I know words, I have the best words,” he said.

Of all the idiotic things to brag about! And as has been painfully obvious since he took office, it’s not remotely true. Check his Twitter feed sometime. It’s insult-o-rama, full of lowbrow words he uses over and over like “loser,” “dummy,” “stupid,” “dopey,” “moron,” “clown,” “goofy,” and everyone’s favorite, “haters and losers.”

Would these be those “best words” he was talking about? Maybe. Or maybe he was referring to how he mispronounces many common words or talks about non-existent countries (shout out to Nambia!). Are his “best words” the ones he makes up?

Let’s take a look at Trump’s Best Words, and you can decide for yourself.

adverb
1. extraordinarily humongous in a way that only winners will ever experience

Trump has many times uttered aloud a word or words that sounds to the ear like he’s saying “bigly,” a totally real word that absolutely no one uses but him. He’s cooled on it over the last six months or so, probably because everyone loves picking on him about it. He, Donny Jr., and Hope Hicks each went on the record to say that President Tangerine is actually saying “big league.”

But the way Trump says it makes it impossible to be certain. (We certainly can’t take his word for it.) For starters, the “g” sound at the end of “league” is barely perceptible — and sometimes it’s not there at all. Secondly, from a linguistic standard, he places stress on the first syllable (“big”), and a lesser or secondary stress on the other syllable (“ly” or “league”).

Put simply, he’s saying it like it’s one word. But we probably shouldn’t question that it’s really “big league.” He is, after all, a very stable genius.

noun, verb, adjective, adverb
1. a stand-in word for anything related to Donald Trump
2. a nonexistent Trump brand of coffee

Trump’s most unforgettable contribution to the English language has to be “covfefe,” a bizarre typo he sent out in the wee hours of the morning one night on Twitter. It’s believed that he meant to type the word “coverage,” because covfefe was preceded by the words “despite the constant negative press…” 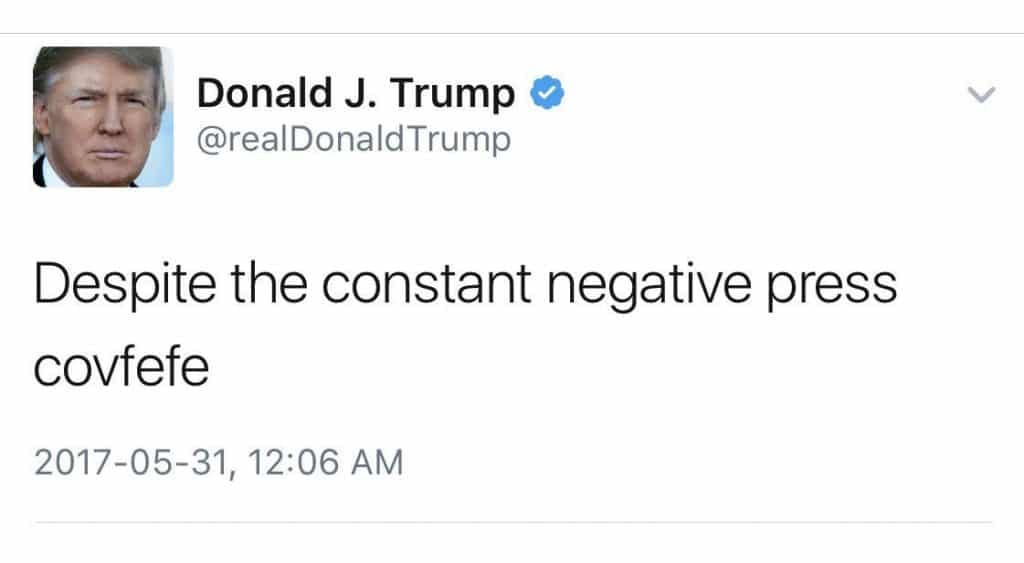 But the President himself has never explained what he was trying to say. Although he did do something I never thought him capable of: he kinda laughed at himself — an act he soon negated by deleting the original covfefe tweet.

In lieu of a proper explanation, the word has become a beloved comedic tool in the grammatical toolbox of writers, pundits, celebrities, and especially Twitterers everywhere. Regardless of the context of whatever you’re talking about, substitute one of the words with covfefe and it instantly becomes a dig at Donald Trump.

For fun, it can also be used in place of “coffee,” the real-life word it’s arguably closest to. It also lends itself to as many fake coffee brands and t-shirt designs as you can imagine.

“All the bad news on TV is making me want to covfefe.”
“So sleepy, gonna need some covfefe to stay awake.”

noun
1. a person who believes him or herself powerful, but is actually powerless
2. someone who’s all big talk, with no action or follow-through
3. the opposite of a “heavy hitter”

“A total lightweight” is one of Trump’s favorite descriptors and favorite putdowns. He used it to describe several of his opponents during the campaign. He’s called many journalists lightweights. Other world leaders are lightweights if they dare to challenge him. Basically, any individual who speaks against him is in danger of being slapped with this very special label.

Lightweight is interchangeable with another favorite word of his: weak. Calling someone weak, in Trump’s mind, is calling them powerless. Because for him, everything is about power. Or at least, the appearance of power.

The etymology of lightweight stems from boxing, in which contenders are sorted based on how much they physically weigh. Naturally, Trump sees himself as a heavyweight (the biggest and most powerful), so all of his opponents must be lightweights (the smallest and weakest) by comparison. Because no one is as “great,” “tremendous,” or “the best” as he is.

proper noun
1. racist sect of humanity who believe that Caucasians are vastly superior to all other races
2. “skin-heads,” “neo-Nahzeez,” “white power,” etc.
3. the political party of Adolf Hitler

Nazis is pronounced “NAHT-zees.” We can only assume that when Donald Trump says “NAH-zeez,” he’s referring to the same thing.

Trump’s connection to neo-Nahzeez — they all voted for him because of his “America first” nationalist leanings, not to mention the President’s own racism — has been a constant sticking point for his opponents, coming to a head when he refused to condemn their hate-filled violence in Charlottesville, Virginia. He continues to have a troubling link to modern Nahzeez, though he denies it.

noun
1. a swath of land that’s almost entirely surrounded by water and typically considered separate from the mainland

Donald Trump has so many strange pronunciations, and he NEVER STOPS TALKING, so it can be very hard to keep up with every bonkers thing that comes out of his mouth. You’re still trying to figure out what that word was he just butchered when he’s already uttering another.

One of them he’s used multiple times is “peninshula,” or as every other English-speaking person on the planet pronounces it, peninsula. Does he truly think that it’s properly stated with a “sh” sound in the middle? Or are his notorious dentures — which he vehemently denies having — giving him a hard time with this one?

adjective
1. the actions of a lightweight that are not Trump-approved and therefore profoundly unfortunate for themselves and others

It is a shame that the biased media is able to so incorrectly define a word for the public when they know that the definition is wrong. Sad!

Mr. Trump has ended countless tweets with this tiny little word, and he seems to love it because he’s molded it into a universal putdown. Instead of gloomy or heartbroken, “sad!” (and the exclamation point is important, although it’s sometimes substituted for an all-caps “SAD”) is a descriptor that can apply to anyone who isn’t him.

It’s kind of like he’s saying that so-and-so or something they’ve done is “unfortunate,” but it comes with an extra dash of condescension. Everything he does, lest we forget, is about promoting his own greatness, his success, his power, and so on, so pointing out someone else’s mistake (or what he perceives as a mistake) isn’t enough. He must also use the opportunity to demonstrate his superiority and how he never would have made such an incompetent decision.

You may alternately see “bad!” or “BAD” on occasion. This is similar to “sad!” but it has less of an “unfortunate” connotation and more of a finger-wagging kind of thing.

verb
1. Yiddish term for male genitalia that’s been turned into a verb, suggesting a non-consensual sexual encounter
2. to “beat badly”

Donald Trump famously used this one to describe how Hillary Clinton lost the 2008 Democratic primary to Barrack Obama. She “got schlonged,” he said to a crowd of his cultists during one of his , I mean rallies, during the 2016 campaign.

It was a spur of the moment sexist slur that it’s not hard to imagine Trump using all the time in private. For his part, Trump later claimed that it was not sexist, it was just another term for being “beaten badly.” And not physically beaten. He means losing.

Sure, Donald, that’s exactly what it means. Also, you never, ever tried to grab anyone by the p*ssy.

adjective
1. super duper bigly enormous
2. bigger and better than anything ever

Unarguably one of the Donald’s very favorite words, “yuge” is a superlative he uses to describe anything he deems to be “the best.” It’s not purely about size, although it can be.

His poll numbers are yuge. His food portions are yuge. Everything that’s gonna happen to the U.S. while he’s in office will be YUGE!

If we’re being fair, this mispronunciation of “huge” is not unique to Mr. Trump, and is found frequently among accents across New England, alongside other regional colloquialisms. Bernie Sanders has even been known to say yuge.

It’s on this list not because Trump uttered it, it’s here because he uses it constantly. It’s one of his favorites.