Battle of the Crazies: Donald Trump vs. Kim Jong-Un

by Justin Andress 5 years ago8 months ago

By the middle of June, Donald Trump will have done something that no other United States president has done in recent memory. He will sit down with the supreme leader of North Korea.

If you ask Trump, the upcoming sit-down is a massive win for international politics (‘yuge).

If you ask every other president who came before him, meeting with the leader of North Korea lends the regime legitimacy it does not deserve. If you ask the rest of the world about the summit, you’ll hear half-scared jokes about the two world leaders kicking off World War III.

Perhaps the most interesting response, however, is the response coming from the people of North Korea. Those scant folks who are allowed to see what’s going on in the rest of the world will eagerly explain that they think Mr. Trump is freaking nuts. I mean, sure, in the United States, about half the people believe Trump is a lout, a sexist, a racist, and a gleefully ignorant loudmouth. When it comes to “crazy world leaders,” however, most Americans will tell you that Kim Jong-un corners the market.

With these two hotheads finally getting together in the same room, the question bubbles up: who is crazier, North Korea’s reigning champ Kim Jong-un or up-and-comer Donald Trump?

On Dealing With Foreign Nations

Sure, we all know that Kim Jong-un will threaten to go nuclear at the drop of a hat. It’s his MO. Just last December, Kim said, “The entire United States is within range of our nuclear weapons, and a nuclear button is always on my desk. This is reality, not a threat.”

Everyone stateside knows that until recently, Kim Jong-un’s favorite answer to a question was, “blow it up,” but what about Donald Trump? Well, two months earlier, Trump spoke to the United Nations and explained that he was pumped to “totally destroy North Korea” if need be. The President even mixed in the line, “If the righteous many do not confront the wicked few, then evil will triumph.” That’s not something a head of state says, it’s something Samuel L. Jackson says before he puts a bullet in you.

Not to be outdone, of course, Kim Jong-un responded to the speech by saying, “I will surely and definitely tame the mentally deranged US dotard with fire.” That is inarguably some next-level crazy.

Advantage Trump. Sure, Kim Jong-un’s threats are scary, but they’re also primarily aimed at one enemy: us. Meanwhile, Donald Trump will threaten whichever country happens to find itself in Fox News’ crosshairs.

One thing you gotta admit, both Donald Trump and Kim Jong-un have standout coifs. But which one is an insight into the insanity bubbling just underneath their silly, silly hair?

Thanks to Michael Wolff’s book, Fire and Fury, we know that Ivanka has divulged the aerospace-level mechanics behind her father’s ‘do.

“[An] absolutely clean pate—a contained island after scalp-reduction ­surgery—surrounded by a furry circle of hair around the sides and front, from which all ends are drawn up to meet in the center and then swept back and secured by a stiffening spray.”

Insecure and sad, sure, but not necessarily crazy. At least, Donald Trump’s brand of nuts has nothing on Kim Jong-un’s high and tight look. 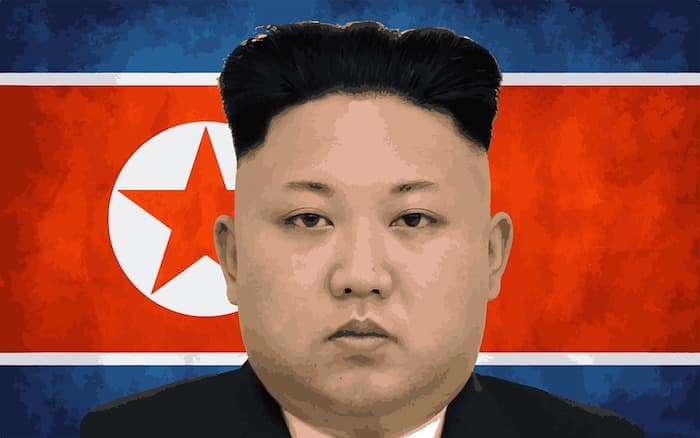 Sure, there’s nothing especially insane about the hairdo. It’s not going to make the cover of Vogue, that’s for sure, but it’s not awful — until you discover that Kim Jong-un has outlawed his haircut in North Korea. Of the 15 sanctioned haircuts that North Korean men are allowed to get, Kim’s isn’t one of them.

Advantage Kim. Trump’s ‘do is very silly (and labor-intensive), but it’s got nothing on the level of wackadoo as making it illegal for anyone to copy your look.

Both haircuts suck, though, let’s be honest.

On Dealing With Celebrities

It’s pretty safe to say that both Donald Trump and Kim Jong-un qualify as star-f*ckers. Kim is so obsessed with western culture that he was legitimately pumped to hang out with Dennis Rodman, even after this exquisitely awkward rendition of the birthday song:

The real victims in that scene are the other basketball players on the court.

When it comes to celebrities and the President, he’s no less effusive with his praise, but Trump does put potential friends through a bit more vetting. As the president of the United States, Trump also draws a higher level of celebrity to his side. Sometimes the stars supporting Trump are bewildering, but when you’re dragon energy, you’re dragon energy.

The real issue is that Trump will support anyone who calls him smart and capable. Literally anyone. Remember the time Trump told Fox and Friends that Putin was friendly to him and then followed it up by saying, “I’ll just say this, they are doing – they’re outsmarting us at many turns, as we all understand. I mean, their leaders are, whether you call them smarter or more cunning or whatever, but they’re outsmarting us”?

Advantage Trump. Kim Jong-un still loves Dennis Rodman, and that is straight-up loco, but Donald Trump will entirely disregard someone’s past, present, and future if they tell him he’s got a dope haircut.

If you really want some insight into a person’s mental stability, you have to think about how they interact with the people around them. Let’s kick things off with the president, about whom there is scads of information. And little to none of it is great.

When it comes to Kim’s personal life, the West is mainly left in the dark. The information that we do have is not particularly flattering. Take, for example, Kim Jong-un’s disappearing-reappearing wife, codenamed “Ri”. Why the codename? Because no one knows her actual name. Over the course of the couple’s relationship, Ri has disappeared for months at a time. Pretty much the only thing people know about her for sure is that she used to perform, and she has expensive taste in clothing.

There is also the string of people who have just disappeared after seeming fall out of favor with Kim Jong-un. To date, no one has noticed an accumulating number of missing people attributed to Donald Trump.

And let’s face it, if Trump was disappearing people, he’s way too stupid to keep it covered up for too long.

Advantage Kim. Trump might not be ordering hits (that we know of), but over the course of the last forty years, he’s proven himself to be a toxic dill hole who uses his fortune to cover up his misdeeds.

That said, Kim Jong-un ekes out the win because he doesn’t use money, he uses his army.

Ultimately, when Kim Jong-un and Donald Trump meet later this summer, the craziest person in the room will likely be the President of the United States. Don’t be mistaken, Kim Jong-un is a ruthless dictator who thrives on the oppression of his people. But he’s just not as crazy as Donald Trump.

The constant flow of information painting Kim Jong-un as a complete craze-ball makes it almost instinctive for every American to call Kim the more insane world leader. However, when the news breaks that Kim Jong-un has pledged to completely abandon his infamous nuclear program on the condition that the United States doesn’t invade his country, it sounds less like the ravings of a madman and more like the pleas of a terrified tyrant whose state is on the brink of collapse.

In other words: Kim Jong-un is scared, not crazy. Well, not as crazy. Trump, on the other hand, has had professionals diagnose him with everything from Alzheimer’s to narcissistic personality disorder. Sure, it’s not up close speculation, but it’s closer to confirmation than experts have gotten with Kim.