Proof That Melania’s RBF Is A Direct Result Of Her...

Melania was all smiles while sitting next to the Obamas at the funeral of former First Lady Barbara Bush last week, and the internet is going nuts. It’s no surprise that after allegations of Trump’s numerous affairs were made public, Melania has been cold and distant toward her husband. Not that her expressions were much different from her usual resting bitch face but still notable. The internet has been laughing for months over Trump’s repeated attempts just to hold his wife’s hand,  so to see Melania laughing and smiling, at a funeral no less, was unexpected. And it wasn’t one of her notorious fake smiles that we’ve become accustomed to seeing. Melania’s smile was genuine and has been one of the few we’ve seen during Trump’s presidency. After some significant digging, I came across some these rare photos of Melania smiling and surprise surprise, it only happens when Trump is nowhere to be found. 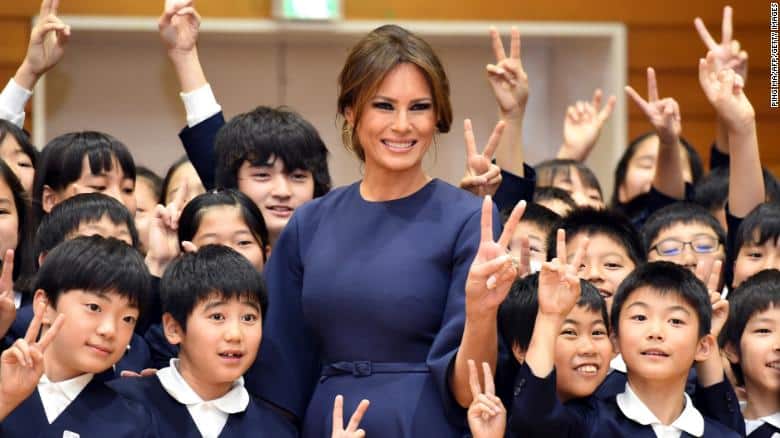 In November, Melania accompanied her husband on a trip to Japan to pay respects to the Emperor and Empress. The First Lady was reportedly stiff and going through the motions of the meeting until halfway through the day she left her husband behind to spend time with the prime minister’s wife, First Lady Akie Abe. The took visited Kyobashi Tsukiji Elementary School where 200 children were waiting to greet our First Lady, offering her hugs and high-fives from the moment she walked in. Reports stated that Melania lit up upon walking into the school’s gymnasium where all of the students were, and took time to pose for photos with them. As you can see from the picture above, being without her husband certainly works for her. Melania is practically glowing as she throws up a peace sign with the kids for cameras. She even took a calligraphy class where she observed their work before sitting down to practice her hand at the skill as well.

Thank you @morikamimuseum for the inspirational presentation of your sacred gardens & life & culture in Japan. pic.twitter.com/JxfwaPjX06

After spending time with First Lady Akie Abe in Japan, it seems that the Trumps may have invited her and her husband Japanese Prime Minister Shinzo Abe to stay with them in Florida. While the men were out playing a round of golf, Melania and Akie paid a visit to the Morikami Museum and Japanese Gardens in Florida. Reports stated that FLOTUS was taking notes on the flowers in the garden to prepare her for taking care of the First Lady’s Kitchen Garden and the Rose Garden at the White House. Likely these ladies are giggling over something other than roses though. 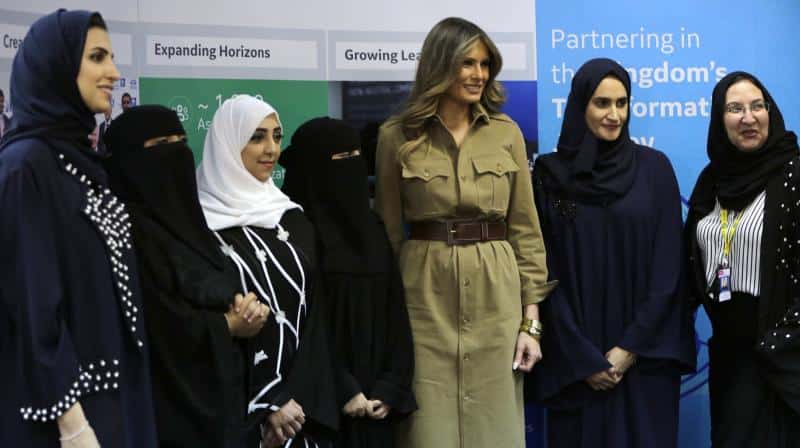 Another stop on the presidential trip abroad, Melania accompanied her husband to Saudi Arabia where the two spent some time apart while she visited an all-women’s business services center in Riyadh. Oddly enough, her goal was to promote women’s empowerment even though that’s hardly part of her husband’s presidential agenda. It seems the women she met with didn’t mind as she was given a tour of their facility and spoke to them about finding a balance between a career and motherhood. Melania’s smile in this photo tells us that she just might have opposing political views from her Cheeto-looking hubby after all. 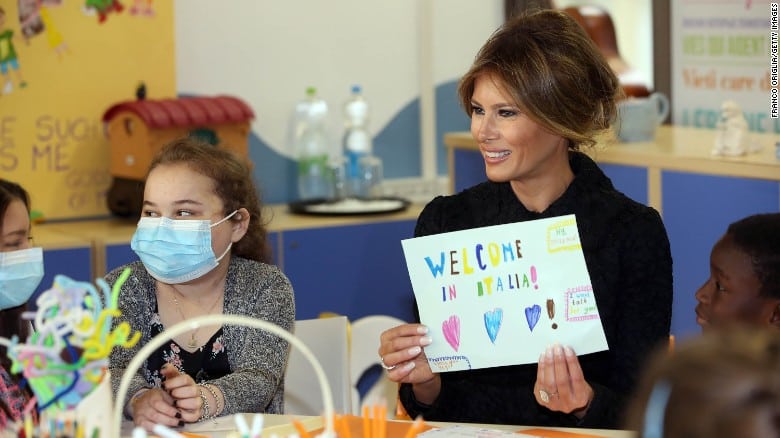 After meeting with Pope Francis at the Vatican with POTUS, the First Lady took the time to visit the children’s hospital in Vatican City. After taking a tour of the cardiac intensive unit, she spent time with kids from nine different countries drawing, painting, and taking selfies. There isn’t an ounce of pity in her eyes, as shes all smiles and openly affectionate with these children. Melania is shown here showing off a piece of artwork done by one of the kids, appearing grateful and cheery. Before leaving the hospital, she signed their guest book writing, ‘‘Great visiting you. Stay strong and positive. Much love, Melania Trump.’’ The first lady also doodled a little heart and flower below her statement, making it clear that being around children puts her in her natural element.

To honor World Book Day, the First Lady paid a visit to the children stuck in New York’s Presbyterian Hospital. While reading them a book in a photo she shared on her Twitter page, you can see the sheer joy on Melania’s face. The common denominator in most of these pictures seems to be spending time with children. Perhaps the First Lady missed her calling as a child educator or nurse.

Melania Smiled At The White House 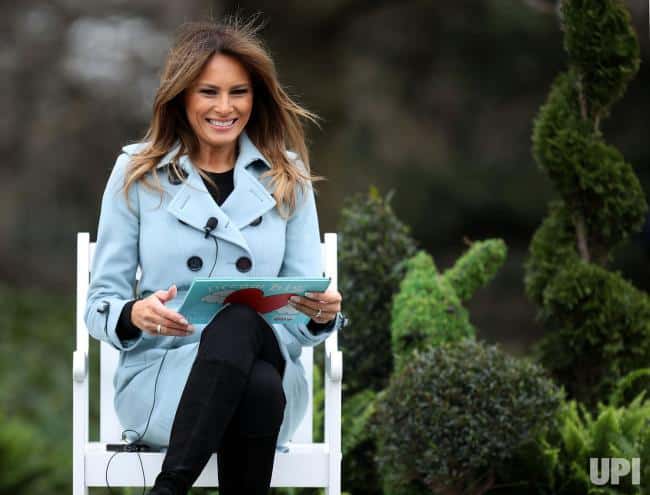 Once again with a book in her hands, Melania’s smile could light up a room. This photo was taken just this past Easter at the White House where they hosted the Easter Egg Roll. The First Lady is gleefully reading a book for an audience of thousands, as they anticipated 30,000 people to attend the event that day. It’s safe to assume that Trump was nowhere nearby, as other photos of the audience don’t indicate that he’s there listening. That’s probably why Melania looks so festive. 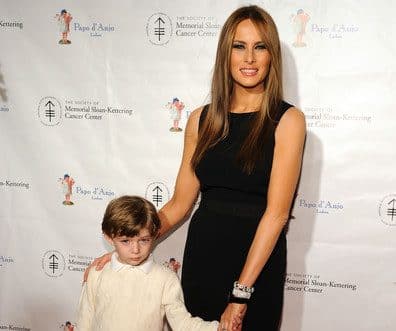 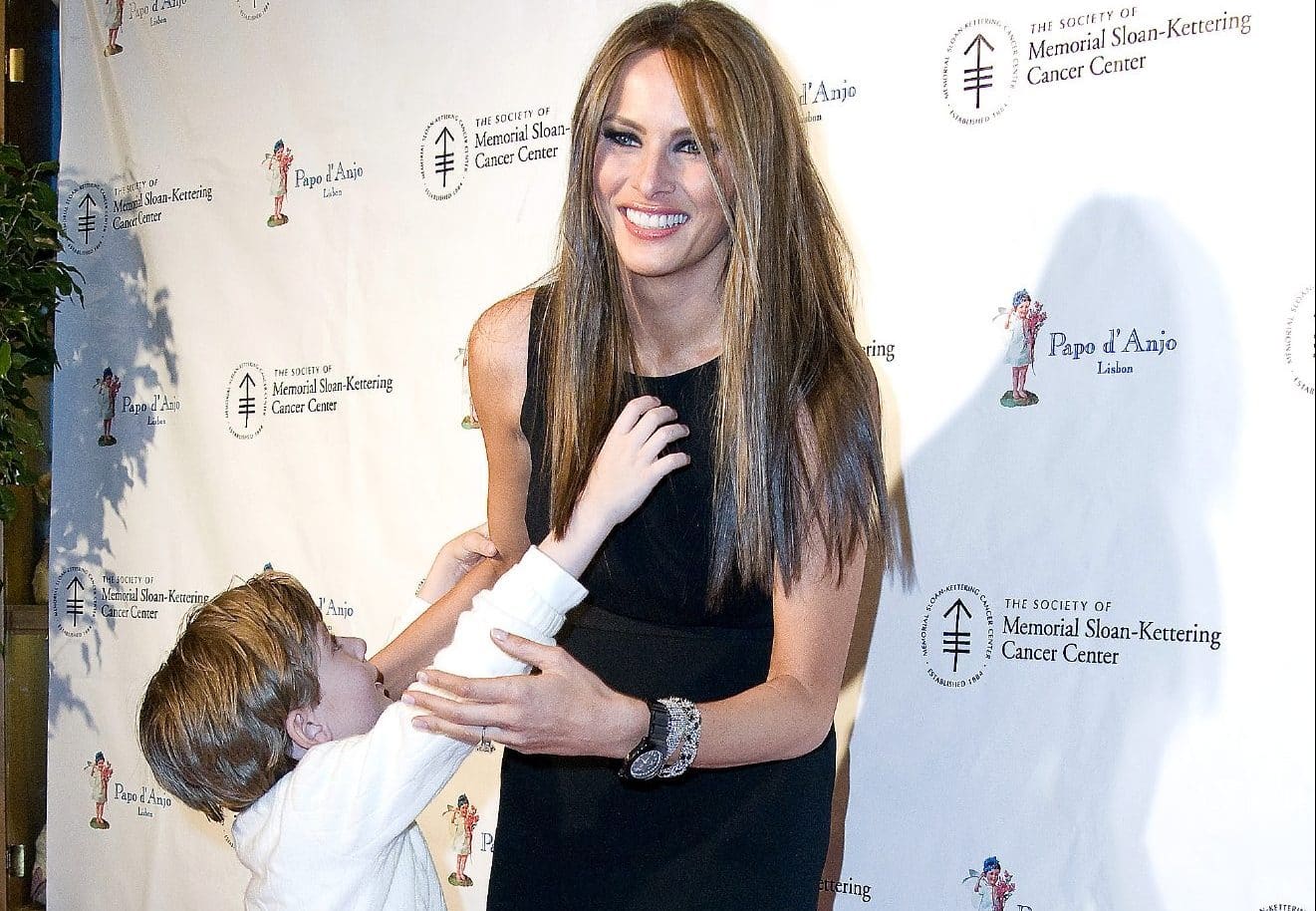 Here’s one from back in the day, before Melania was First Lady and her husband’s affairs became public knowledge. While attending the 19th annual Bunny Hop at NYC’s FAO Schwarz in 2010, FLOTUS was photographed seemingly having a blast with a young Barron. With Trump nowhere in sight, even her posed grin appears to be more natural than anything we’re used to seeing. Melania is even caught being playful with her son, which is so far from the person we’ve seen in front of cameras since she has become the First Lady. It’s almost as if this photo is of an entirely different woman.

What’s that saying? The proof is in the pudding, as Melania’s face can’t seem to help but reveal her moods. While it is certainly rare, these photos prove that the First Lady actually does smile from time to time. It just happens to be when her darling husband isn’t around.

Who Said It? Trump vs. Voldemort

Attorney-Client Privilege, According to Donald Trump