IronStache, the Congressional Candidate Who Makes Paul Ryan Look Like...

It’s official. Paul Ryan, the straight-laced Republican Boy Scout (complete with the anti-LGBT sentiment) who once vowed to repeal the Affordable Care Act has had enough of the jerk faces prowling around Washington, DC. He’s going home. That means Ryan’s seat (and the job of Speaker of the House) is up for grabs. For the first time in 20 years, the Republican grip on Wisconsin’s First Congressional District is looking especially vulnerable.

What made one of the most prominent Republicans on the hill abdicate his throne? And what makes IronStache such a worthy replacement? It all boils down to a case of “identity politics.”

Paul Ryan called it quits behind something he refers to as “identity politics.” In speaking to Politico, Ryan explained:

“With identity politics being played all around and 21st-century technology accelerating it and putting gas on the fire — that is my big concern of politics these days. And that makes it harder to have political goodwill in this country because of all this polarization.”

Now, politics being a language of BS all its own, you have to look closely at that quote. At a glance, it should translate to Donald Trump is a schmuck who is ruining old-school politics by making everything about his cartoonish personality, not his actual plans to improve stuff. To make matters worse, a bunch of similarly stupid a-holes is copying Trump’s success by following suit.

….Actually, throughout my life, my two greatest assets have been mental stability and being, like, really smart. Crooked Hillary Clinton also played these cards very hard and, as everyone knows, went down in flames. I went from VERY successful businessman, to top T.V. Star…..

….to President of the United States (on my first try). I think that would qualify as not smart, but genius….and a very stable genius at that!

The man who once said the reason he got into politics was to help out in the “fight of individualism versus collectivism” is getting out of Washington because he can’t keep up with the whole “being an individual” thing.

Even before he threw in the towel in early April, Paul Ryan was already looking at a tough re-election campaign thanks to his primary opponent: IronStache. Last June, Bryce entered the Congressional race in a big way with his first campaign video, a mic drop of folksy poignance that spat in the face of Paul Ryan’s anti-Obamacare platform before segueing neatly into some of IronStache’s homespun wisdom.

“Not everybody is seated at the table,” intones Bryce. “And it’s time to make a bigger table.”

IronStache’s calming baritone is intercut with footage of the career ironworker on the job and talking with an assortment of diverse Wisconsin citizens. It is fire. If it came out that Paul Ryan saw this thing and immediately began planning his concession speech, it would not surprise.

Even if IronStache hadn’t had some Hollywood-level talent shooting his campaign videos, he still would have given Paul Ryan a run for his money.

From a data-intensive standpoint, IronStache is a political party’s wet dream. Let’s just do the list:

Even more disorienting, at this point in his campaign, IronStache is unafraid to make declarative statements about policy, an unheard of trait for anyone seeking public office. For example, when asked his opinion of campaign finance reform, Bryce didn’t mince words. “That’s one of the things I’m committed to doing is being an advocate for campaign finance reform,” he said, adding, “because it’s absolutely ridiculous the amount of time that’s spent on trying to raise the money in order to get the message out.”

For a guy like Paul Ryan, who repeatedly voted against campaign finance reform, an opponent saying logical things in a plainspoken manner is pants-crappingly terrifying.

He’ll Run Unopposed, Even When the GOP Hunts Up Some Competition

Headed into the 2018 midterm elections, the Democratic Party is looking at some much-needed momentum. Randy Bryce, in particular, is looking harder and harder to beat. In the last half of 2017 (following that viral video), Bryce raised more money than any of his nationwide competitors.

About $1.8 million of that came from small donations, IronStache’s resolutely populist message. “We need more working people in Washington, DC, making decisions on behalf of us,” he’s told reporters.

It also doesn’t hurt to have a whip-smart social media presence.

Moments ago, @PRyan deleted this tweet after we told him just how out of touch he was. Show Paul Ryan what you think of his tax bill. Chip in $1.50 now to help us repeal and replace Ryan permanently this November.https://t.co/c3Fii4Q0Jn

Therein lies the real appeal of IronStache. He’s not “a man of the people,” he’s one of the people. That’s a kinship and understanding Paul Ryan could never hope to mimic. After all, how in touch with the common man is a guy who participates in this photo shoot? 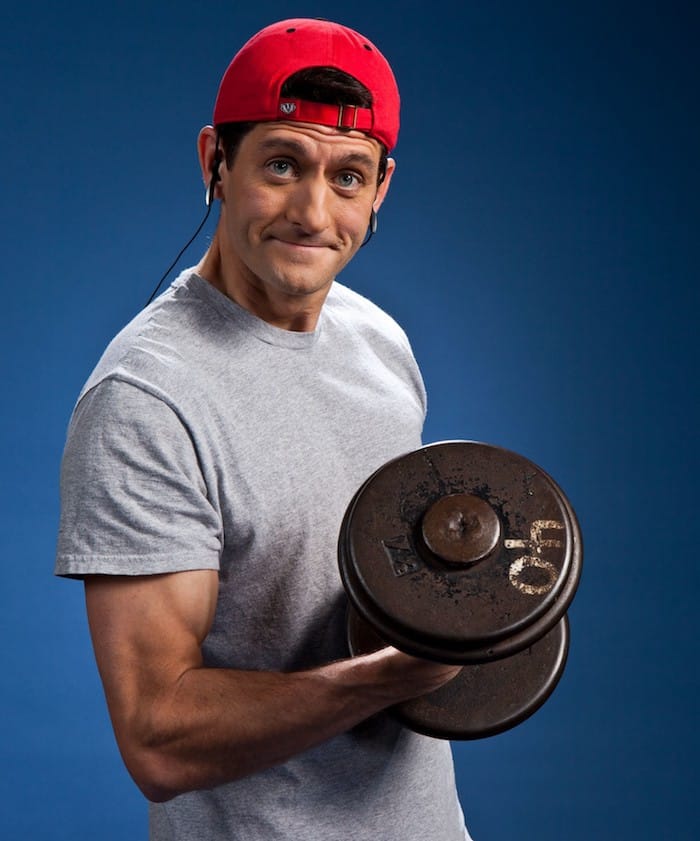 Bernie Sanders Goes To The Polls: ‘After a lot of thought, I voted for me.’